I’m a fan of the AMC series Mad Men, which I’ve been re-watching. So smartly written and superbly acted, and its attention to detail in the setting—1960s New York ad world—is fantastic.

Among the many episodes and scenes that have stayed with me, the one that stands out is from the first season—Episode 9, “Shoot” (written by Chris Provenzano and series creator Matthew Weiner ). The title is a play on words, for in the episode there’s a photo shoot, and at the end another kind of shoot, which I’ll get to in a moment.

In this one, Betty Draper—perfectly played by the incandescent January Jones—is given a (seemingly) out-of-nowhere offer to become the new face of Coca-Cola. She had done some modeling before marrying Don Draper and taking on the duties of a full-time housewife.

Betty is flattered and excited. It’s a chance to break out of the routine she’s in, to escape some of the mundane problems she has to deal with at home. One of those problems is a neighbor who raises pigeons. The man chewed out Betty’s kids for letting their dog attack one of his free-flying birds. He threatens to shoot the dog if it happens again.

Now Betty has this opportunity! An exec at McCann-Erickson, one of the big agencies, calls her into a studio for a photographic session.

And then she gets canned. The agency tells her it’s because the higher-ups have decided to go in a different direction. It’s a lie. Unbeknownst to Betty, the exec at McCann gave her the gig only to coax Don to come over to his agency. When Don tells him to pound sand, Betty is shown the door.

You really feel for Betty, of course. She was so thrilled at getting selected for a prime role, while all along she was just a pawn in a man’s game.

At the end of the episode, Betty is dressed in a flimsy robe one morning. She lights a cigarette and sticks it in her mouth, gun-moll style. Then she takes her son’s BB gun out into the yard and starts shooting at the neighbor’s pigeons, as he screams at her to stop. 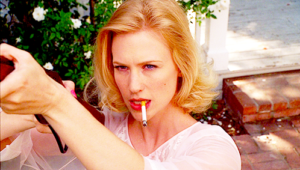 It is one of the most stunning and surprising endings to a TV episode ever. Variety called it “the first truly brilliant moment of the 2007-08 television season with the pitch-perfect end…”

One of the secrets of page-turning fiction is what I call unanticipation. It’s the opposite of boring, for boredom comes when a reader anticipates (even subconsciously) what will happen next—and then it does.

If that occurs over and over, the reader is not going to finish the book. Why should they? They already know what will happen.

Thus, it behooves a writer to constantly be asking, What would the average reader expect to happen next? and then do something else.

Even more to the point, sometimes go to a place that is at the far end of the unanticipation scale, so far that it makes you nervous.

I wonder what the story meeting on this Mad Men episode sounded like.

“So Betty is deeply hurt and despairing about getting dropped as a model. She tries to save Don’s feelings by telling him she didn’t want the gig after all. How do we fade out?”

“Maybe Betty is sitting alone, smoking a cigarette, pouring herself a drink.”

“Kind of what we’d expect, though.”

“Yeah…what if she looks at herself in the mirror then breaks the glass?”

“I dunno. What if she drives the car into a lamppost … no … what if she stands in the window at Macy’s as if she’s a mannequin … wait … she goes outside her house with a gun and shoots at some birds!”

“Whoa! That is so un-Betty like. She’s Miss Perfect.”

That’s the kind of thinking you should do. Learn to reject the first, second, even third idea you come up with in order to get to a place you never thought you’d go. Because if you never thought it, it’s certain the reader won’t think it, either!

So when was a time you went to a place in your writing that surprised or even shocked you? How did it turn out?