What the well-dressed crime novelist wears to a writers conference. 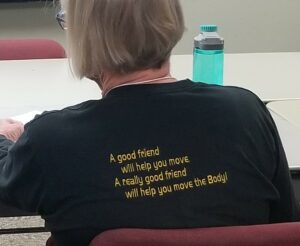 If you’ve attended writing conferences, you likely had a great time. You chatted with fellow authors, learned about craft, picked up marketing tips, and made important contacts with editors and agents. Organizers strive to make the schedule seamless, the meals hot and tasty, the speakers interesting.

Everything probably ran smoothly and you walked away happy.

You never saw the drama behind the scenes.

And that’s how it should be.

But making it look easy requires lots of preparation plus the ability to drop back and punt when circumstances go awry. 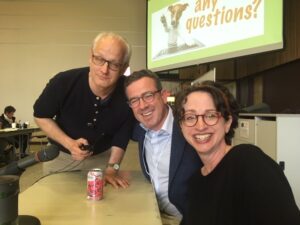 The speakers were excellent as well as great fun, as this photo shows. Mugging for the camera is Jeff Giles, Vanity Fair Hollywood editor, Simon & Schuster editor Ben Loehnen, and Haven Kimmel, author of A Girl Named Zippy.

As a conference committee member and sometimes co-chair, I’ve worked many of those 29 events.

Some years are a blast. Other years, s**t happens.

Manuscript evaluations by editors and agents are always major draws for attendees. Slots fill fast and the back-up wait list is long.

This year, three weeks before the conference, the guest agent suffered a family medical emergency. He remained hopeful he could still attend but the outcome was too uncertain to predict. We told him to take care of his family and that we would find a replacement.

We organizers felt terrible for him. But we also had 100+ attendees to worry about. Many travel from other states and expect to hear an agent. We had to deliver. Out went a wild flurry of phone calls and emails.

But…August is traditional vacation time in the publishing industry. Some were out of the office and unplugged. Others already had commitments and couldn’t come on such short notice.

As our panic grew and time evaporated, a hero stepped up. A couple of years before, Barbara Schiffman had been a big hit at our conference. She’d worked for decades in the Hollywood film industry, doing story analysis and script evaluation for producers. Recently, she semi-retired and moved to nearby Whitefish, Montana. She graciously agreed to substitute, including doing manuscript critiques.

One year, a much-anticipated horror author was sidelined by airline snafus. She departed New Orleans on Friday morning and was supposed to arrive in Montana by 4 p.m. in time for the welcome dinner for speakers.

At noon, she called from Houston where she was stuck. A weather system caused a domino effect, delaying all flights. The poor woman spent nine hours in the Houston airport trying to reschedule. The upshot: the airline could deliver her to Montana at midnight the following day…after half the conference was over. She wound up going home to New Orleans, unfortunately with a new horror story to tell.

Years ago, a renowned true crime author agreed to present. We were over the moon to have such a big name. Registrations poured in. Even non-writers paid to hear her speak.

But…she was a nervous flyer. First, she said she’d drive. Then she decided her health wasn’t good enough to drive. Could she take a train? I looked into arrangements but the cost was four times that of a plane ticket. Our group is nonprofit and the money for a train ticket wasn’t there.

She nearly backed out several times. I spent hours on the phone with her, trying to reassure her. Finally she gathered her courage and got on the plane.

She was a huge hit–the attendees were thrilled. Best of all, she herself had a fabulous time and loved every minute.

At the end of the conference, she clasped my hands and said, “I am SO glad I came! This is the best conference I’ve ever been to. And to think I almost didn’t come.”

Most speakers are wonderful, gracious people who want to help other writers. In 29 years, I can count the clinkers on the fingers of one hand. But those few clinkers really leave an impression.

One year, a big-name mystery author was supposed to teach a three-day intensive workshop. He showed up with his girlfriend and they were fighting. He then told us he shouldn’t have come because he was on deadline.

Uh, you didn’t know that when you committed to teach?

The first morning, he grumbled and complained for three hours to his students about his deadline and troubles with his girlfriend. After lunch, he pitched a fit, saying he couldn’t possibly write in his hotel room because his girlfriend was irritating him. “I’m not hard to please,” he claimed, “just find me a quiet place with a table.” So I found several alcoves in the hotel where he could write. He couldn’t stand any of them.

The second morning, more whining, no teaching. Students were irritated and their complaints were totally valid.

The third morning, he put in a halfhearted effort to review a few manuscripts but the class was a disaster. We wound up refunding tuition to his disappointed students.

At the party on the last evening, in front of everyone, he apologized to me for his behavior and presented me with a T-shirt…that advertised his books.

Can you spell E-G-O?

Hiccups aren’t always with speakers. Once in a while, volunteers throw sand in the gears. One member was obsessed with finding an agent. He found out when the agent’s flight was scheduled to arrive, even though someone else had been assigned to do airport pickup. He showed up early, grabbed the agent, took him out to dinner, and badgered him for three hours about representation.

This happened before cell phones so we couldn’t call the agent. We knew he’d arrived on the plane but he’d disappeared. No one could find him.

Finally, the dazed agent arrived at the hotel. He told us he wasn’t thrilled that we’d sent this obsessed writer to pick him up. We apologized profusely and explained the guy had acted on his own, totally without our knowledge. Fortunately, the agent had a sense of humor. He probably told that story at future conferences as a cautionary tale of how not to impress an agent.

Needless to say, the kidnapper didn’t receive an offer of representation.

For every horror story, there are at least a hundred tales of writers who were inspired to finish a book, take the plunge into publication, or step up to the next level in their careers.

This year, attendees came from all over Montana, as well as Texas, California, Indiana, Iowa, Colorado, Missouri, Arizona, and Canada. 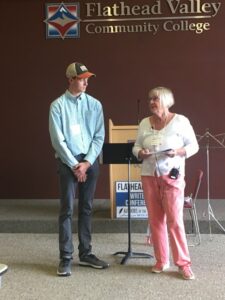 Several young writers were at their very first conference, including a 16-year-old filmmaker. Gabe Grende is a local high school student who started working in video six years ago. He recently attended a film school taught by Michael Polish and Kate Bosworth. Gabe so impressed Michael that Michael took him to Puerto Rico for a location shoot of a Mel Gibson movie.

Gabe agreed to film our conference and we can’t wait to see the finished product.

Meeting a student who’s eager and already accomplished at a young age gives all of us hope and inspiration.

Writing conferences are lots of work. Are they worth it?

TKZers: What’s the best lesson you learned at a conference?

If you’ve volunteered, how did working behind the scenes increase your understanding of the business?

19 thoughts on “Behind the Scenes at a Writers Conference”