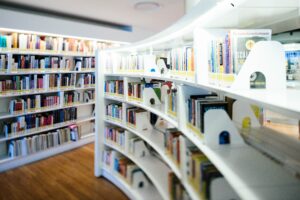 Photo by Chuttersnap courtesy of unsplash.com

I still go to the library regularly. Books appear like magic on my front porch practically every day but there is something — a few things actually — about a library that you can’t beat. My favorite is a metropolitan branch office located in a shopping center a few miles from my home. It’s the type of library — location-wise, anyway — that I patronized as a wee lad and it will no doubt be the kind that I will be walking into when the engine known as “Joe H.’s circulatory system” decides to call a wildcat strike. Yes, the interiors of libraries and the services they provide, moving far beyond books, have changed from sixty years ago and will continue to change. Joltin’ Joe Moore wrote a blog about those modifications almost seven years ago (which you can find here) and it is still on point. There is something, however, that speaks to me about this library, whose exterior is so similar to the one I visited two or three times a week as a child.

I was in that library this past Sunday and was reminded in an up-close and personal way of the reason that we still need libraries. I usually go there just to pick up books I’ve reserved, and this visit was initially no exception to that rule. I got a few graphic novels, consisting of some collections of Ed Brubaker’s and Sean Phillips’ Criminal anthology series and the first two volumes of Brian Azzarello’s and Eduardo Risso’s 100 Bullets. I  also knew that the branch had a copy of Hillbilly Elegy by J.D. Vance (which has been on my “must-read” list for three years) so I picked that up as well. It took me a second to find the non-fiction section amidst the CDs, DVDs, reserves, audiobooks, and magazines, but find it I did. Seeing the books with the Dewey Decimal System numbers on the spine was like greeting an old friend. I in due course found Hillbilly Elegy right where it belonged (“305.562 VAN”). I was about to go to the self-serve checkout kiosk when I noticed a book displayed on the shelf where I found Hillbilly Elegy. The book — Outliers: The Story of Success by Malcolm Gladwell (“302 GLA”)— looked interesting, so I checked that out as well, thanks to a librarian who liked the book enough to put it on display so that would stand out.

Digital editions of books are becoming more popular, This has caused a bit of a dispute between publishers and libraries which you can read about here).  The market for physical books may be decreasing but it hasn’t collapsed. I like physical books — there is something about the tactile experience with a book that can’t be beat — but I have come to prefer eBooks for two reasons. One is that I can adjust the font and its size. The other is the “search” feature. If a novel has more than a couple of characters I often forget by page 135 who was doing what on page 40. One can obtain either format, regardless of preference, of many titles at or through the library. Take the aforementioned Hillbilly Elegy. There was a waiting list — a long one — for digital copies (author Vance is an occasional resident of the Columbus area) but a physical copy was readily available. And yes, many of you like audiobooks, which are available at and through the library as well. I am amazed at the width, breadth, and depth of audiobooks which are available digitally and physically through and at the library.

One last story. While I was browsing an announcement was made that the library was closing soon and that anyone who needed a ride home should contact the front desk. After I checked the books out at the kiosk I walked to the front counter, and asked the three women sitting behind it, “Who do I see about that ride home?” They all laughed, and one said, “Wellll…Uber, Lyft, Yellow Cab…” Everyone laughed again, and then the quick-witted librarian happened to look at the books which had been checked out by the half-witted patron. “Oh! I’m glad you got that,” she said, pointing to the copy of Outliers I had checked out. “I put that up weeks ago!” So there you go. You don’t get that type of human interaction on Amazon.

30 thoughts on “Incident at the Library”