Tobias Martel walked from the sidewalk to the back door of an older, one-story house that screamed for basic repairs. One block east of South King Street in the historic district of Leesburg, Virginia, the run-down state of the property, which faced the Washington and Old Dominion bike trail, violated all the stereotypes of the richest county in the United States. Overgrown bushes and trees provided some needed cover for his operation, safe from the passing cyclists and runners on the W&OD trail.

The targets that lived in the house used the back door exclusively because the gravel driveway led right to it. The front and back doors were the newest parts of the house, along with the locks. Both were secured with Kwikset double cylinder locks, a grade 1 lock requiring a key to open from both inside and outside the home. It was designed to keep out a large majority of burglars, criminals, and thieves.

Martel was none of the above.

He was a fraction over six feet and weighed in at 220 pounds. His wrestling days in high school and college gave him a rugged physique that made it hard to shed any more weight. The gray hair, which had peeked through fifteen years ago, quickly accelerated because of the shock according to the doctors. It now covered his entire head, with just glimpses of his former color still visible. He kept his hair trimmed, never going more than four weeks between haircuts. Martel hated that shaggy look. Complimenting his mane of grey was a close beard. More like a five o’clock shadow. It made it easy to change up his looks or grow it back fast when needed.

Martel had eschewed any kind of tattoos. Besides easy identification, he never saw anything socially redeeming about sticking ink under your skin. His only visible identifier was a four-inch scar on his left arm, starting below his thumb and working its way at a jagged angle towards his elbow. It was the byproduct of an unfortunate decision made by a man with a knife. Martel had made sure the man had understood the consequences. He was dead certain this mistake wouldn’t happen again.

In three months, Martel would turn 48. He wondered if this was it—if this was how life would be until it was over. He had thought many times about taking the end date into his own hands. Stopping this perpetual madness before it overwhelmed his nightly thoughts. He argued with himself whether to stay in the game or not. The only issue would be how he exited —his terms or someone else’s.

JSB: Here’s what we have: the kernel of a good opening—an assassin about to do his thing. That would make a gripping scene. The problem is we don’t have a scene. We have description from a disembodied voice (i.e., the author’s).

So rather than going line by line, I’m first going to advise the author to re-write the entire opening chapter using no description at all. That’s what I said. Do this as a discipline to force yourself to write the action of the scene. Don’t put in any backstory, either (e.g., It was the byproduct of an unfortunate decision made by a man with a knife…)

Once you’ve done the re-write, then you can go back and marble in some descriptive elements, but only what is necessary for the reader to envision the scene. I’ll also allow you three sentences of backstory, which you can use together or spread out over the first 10k words.

But the big issue I want to talk about is this pesky thing called “author voice.” It means that as we are reading, we get the vibe that the author is telling us things in his or her own words. (Note: obviously we are discussing Third Person POV.)

It’s often subtle, but the way to tell is when the narration doesn’t seem like anything the character himself would say. A few examples:

Martel was none of the above. That’s the author telling us something, because it’s not what Martel would ever think about himself—at least not in those words.

He was a fraction over six feet and weighed in at 220 pounds. Again, not how Martel would think of himself.

Martel had eschewed any kind of tattoos. Would Martel ever use the word eschewed? I think not.

The reason this is so important is that readers crave intimacy with characters. When the author sticks his voice into the proceedings, that intimacy is diluted, if not lost altogether.

That’s why I advise a “powerhouse secret” that is simple to understand, but requires care and craft to pull off. Once you get it on the page, however, it will return massive dividends in reader engagement. Here it is:

Put all narrative in a form that sounds like the character would think or say it.

In other words, everything on the page should seem to be filtered through whoever the viewpoint character is. It should feel like this: 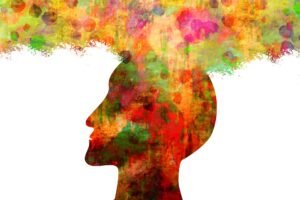 To illustrate, let’s compare a couple of passages.

Ernest Stickley put down his bourbon and went to the men’s room. He was tired of hearing the men around him talking and trying to sound like they were from the mean streets. He also thought it was a mistake to have made that call to Rainy. If the call had been about having a drink sometime, that would have been fine. But he shouldn’t have promised him anything.

Stickley soaped his hands from the dispenser and washed up. Then he looked at himself in the mirror. He looked pale and a bit solemn. In fact, he looked like someone else. He looked like the man he had been before that trouble in Jackson, Tennessee. Back then he had a hard look that helped him stand up to people.

There’s nothing distinctive in this narration. It’s a dry, objective recitation of facts.

Now let’s look at how Elmore Leonard did it in his novel Stick:

Stick left his bourbon and went to the men’s room. He was tired of hearing guys talk, guys wanting you to believe they were street, guys saying man all the time. He shouldn’t have called Rainy. Well, maybe call him and have a drink, but he shouldn’t have promised him anything.

Stick washed his hands with the fragrant pink soap that came out of the dispenser, washed them good and stared into the clear mirror at his features. Pale, solemn. Who was that? Like looking at someone else. Back in another life before Jackson he could narrow his eyes at his reflection––hard-boned but not bad looking––and say, “That’s it? That’s all you got?”

It’s obvious how much better this is. It is Stick’s voice we hear, his attitudes, his musings. It pulls us further into his character, rather than keeping us at arm’s length.

That’s what I want to see in this piece, author. So for your final exercise, after you’ve given us a scene with action, rewrite it in FIRST Person POV. This will force you to write in Martel’s voice.

Then…convert it back into Third Person!

Here’s what’s going to happen: when you re-read your chapter and compare it to what you have here, you will utter the word Wow.

You have the TKZ guarantee.

Two quick notes before I go. First (because this drives me bonkers) there is a difference between complimenting and complementing. You should have used the latter.

Second (from the shameless self-promotion dept.) I’ve written an entire book on the crucial subject of Voice.

27 thoughts on “A Powerhouse Secret for Point of View”