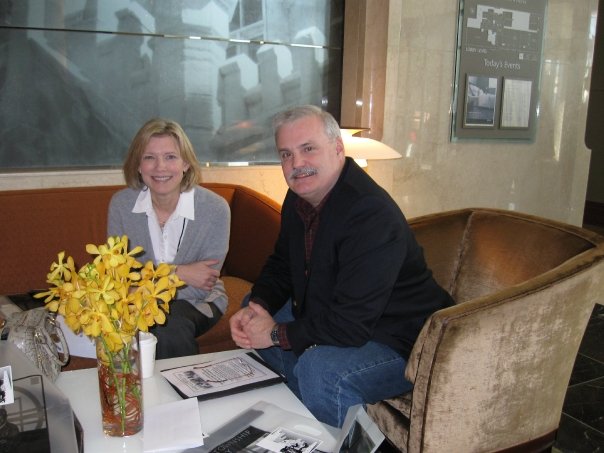 This pic with my dear friend, Shane Gericke, was taken at the now-defunct Love Is Murder conference back in 2009, near Chicago. It was February, and I was promoting my second novel, which had come out in the once dead zone between Christmas (2008) and New Year’s Day (now a pretty good time to be published). Why the dead zone? Primarily my own fault because I made the sophomore mistake of being more than a month late getting the book turned in. If I’d been the professional I am now, I would’ve gotten it in on time, published in October, and the book probably would’ve been in paperback as well. Though my #sophomorefail wasn’t helped by the publishing industry’s January 2009 implosion. Everyone in the business was either deeply distracted by waves of bad news, or their hair was on fire.

That winter, I was way too green to realize my novel had been published “dead,” as the description goes. If a book is published dead, nothing happens. I mean nothing. Oh, my book was on library shelves, and made it into bookstores, and there were reviews. (Joe Hartlaub loved it, which is everything to me.) But it was not pushed by marketing, and not embraced by readers. The publicist still took my calls, but my editor was harder to reach. I don’t think I had another conversation with him until an awkward New York cocktail party a couple of years later. As I mentioned above, there was no paperback.

Why am I telling you this cautionary tale–aside from the fact that I have an odd confessional streak? A public service announcement about meeting deadlines never goes amiss. Seriously, don’t miss your deadlines! The entire trajectory of my career was (possibly, probably) changed because I screwed up so badly.

Five years ago, maybe even two years ago I wouldn’t have shared this story with you. I can’t tell you how many times I wanted to. Yes, I was ashamed and embarrassed. Also, it’s a bad idea to mess with your professional reputation online. You never know what potential editors might think. Potential readers. Then there’s that ego thing. I got the once-in-a-lifetime debut, two book contract. And lost the plot. Nobody wants to be fodder for the Writer Schadenfreude Gossip Machine.

Except that ten years have passed already. I’m what you might call a mid-career author. (Okay, if I die tomorrow, then today I actually would’ve been an end-of-career author. Huh.) These days, I find little value in being opaque. I’m a writer, and I’m human, and I make mistakes. Still.

This whole mid-career thing has taken me a bit by surprise. It feels like no time at all has passed since I sat so nervously in that hotel lobby with Shane. Steve Berry was also there. In fact, I was so nervous about being in public, and around writers and readers whom I didn’t know, that I would go hide in my hotel my room and practically hyperventilate several times a day. But as with so many other things, time brings perspective.

As a writer and human, you will screw up. Accept it, then move on.

If I hadn’t screwed up so badly, I never would’ve taken my rejected novel and started my own little press with my husband. I wouldn’t have learned about self-publishing in the early days, been able to teach my writer friends about it, or gotten to a place where I understand that readers don’t really care who published a book, but mostly just care about the story, and–very occasionally–the author. I might not have pushed myself to come up with a story concept that got me a three book series with a traditional publisher. Or a chance to publish with a truly brilliant young editor. And so on.

(And don’t miss your deadlines!)

Dear TKZers–Do you have a cautionary writer’s tale to share?