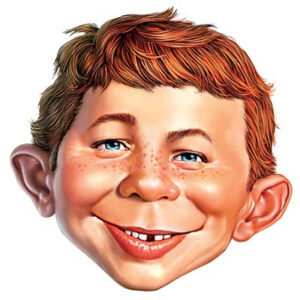 And so it ends, after 67 years. One of the great American institutions, Mad Magazine, is closing up shop. Gone but not forgotten will be the famous Mad mascot, Alfred E. Neuman, whose mysterious background is discussed here. So popular was he that he occasionally ran for president, with the slogan: “You could do worse… and always have!”

Along with my parents and my teachers, Mad played a major part in the formation of my young life. Its influence is with me still—and I hope it always will be.

My big brother bought Mad religiously, and thus I got the issues second hand. I learned about politics from Mad. I knew who Castro and Khrushchev were only because of the cartoon renditions within its pages.

In those years they had literate, educated satirists who were able to skewer sacred cows with a precise wit that appealed to adults, too. And the artists! Here I must call out two of my favorites—Mort Drucker, master caricaturist; and Don Martin, whose mind-bending cartoons blew right past the safe and predictable into uncharted realms of hilarity.

Of all the talent, though, my absolute favorite was the poet laureate of Mad, Frank Jacobs, who, at age 90, is still among us. Jacobs did the libretti for many of the Mad satires of famous movie musicals. I also have a first edition of his legendary collection, Mad For Better or Verse. The amazing thing about Jacobs is that his satirical songs always scanned perfectly along with the originals. He never hit a bad note.

Here’s an example. One of the first political pieces I remember from Mad is East Side Story, a send-up, of course, of the Leonard Bernstein-Stephen Sondheim musical. It was Jacobs at his best, along with the fantastic caricatures of Drucker (also still alive, also 90. Comedy is healthy!)

Remember how West Side Story begins with the “The Jet Song”?

When you’re a Jet
You’re a Jet all the way
From your first cigarette
To your last, dying day!

Well, East Side Story begins outside the U.N., with all the major Communists of the day, led by Nikita Khrushchev, snapping fingers and singing:

When you’re a Red
You’re a Red all the way
From your first Party purge
To your last power play!

When you’re a Red
You’ve got agents galore;
You give prizes for peace
While they stir up a war!

You set off a test,
And when you’re halfway through it–
You point at the West
And say they drove you to it!
That’s how you do it!

We are the Reds … With a punch in the face … Which we’re aiming today … At the whole human race … At the whole–! Ever–! Trusting–! Human–! Race!

That, my friends, is genius.

Some of the other satires I recall from Mad’s golden age include Who in Heck is Virginia Wolfe?, Voyage to See What’s on the Bottom, 201 Minutes of a Space Idiocy, Botch Casually and the Somedunce Kid, and my personal favorite, Hack, Hack, Sweet Has-Been or Whatever Happened to Good Taste? This was a combo satire of the films Hush, Hush, Sweet Charlotte and Whatever Happened to Baby Jane? It featured the following cast: Olivia DeHackhand, Bette Devious, Joan Clawfoot, Joseph Cuttin, Agnes Gorehead … and Greer Garson as a headless torso.

I ask you, what child soaked in such material could fail to grow up into a happy and productive citizen? 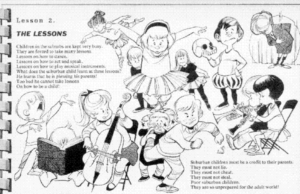 And whenever Mad turned its gimlet eye upon social structures, it skewered them with unerring insight. As in their 1961 send-up of the suburbs, titled “A Child’s-Eye View of ‘The Affluent Society.’ ” Look at the chapter called “The Lessons” and tell me it’s not still timely:

Children in the suburbs are kept very busy.
They are forced to take many lessons.
Lessons on how to dance,
Lessons on how to play musical instruments.
What does the suburban child learn at these lessons?
He learns that he is pleasing his parents!
Too bad he cannot take lessons
On how to be a child!

So goodbye old friend. I shall remember you fondly. And whenever the kultursmog becomes thick with putridity, and the zeitgeist attempts another brain heist, I will bring to mind Alfred E. Neuman’s immortal words to live by:

So what periodical was your favorite as a kid? How did it influence you?