My pal, Susan Purvis, was invited to be the keynote speaker at the St. Eugene Writers Conference near Cranbrook, British Columbia. She invited me to tag along and share the hotel room the organizers had graciously provided for her.

Writing workshop, free room, and a favorable exchange rate—what’s not to like? 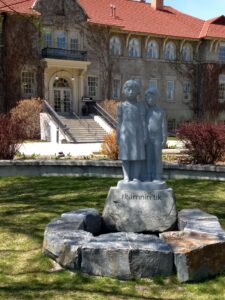 To Honor “The Children” at St. Eugene Mission School

Surrounded by snow-tipped mountains with the St. Mary River flowing past, the St. Eugene Hotel had a once-dark history and was supposedly haunted.

Built in 1910, on a road to hell paved with good intentions, the Canadian government and the Catholic Church operated St. Eugene as an Indian boarding school. First Nations’ children were separated from their families, not allowed to speak their native tongue, nor practice cultural traditions and customs.

The boarding school system broke down traditional family structure, resulting in generations of poverty with staggering rates of alcoholism and chronic unemployment. The school was closed in 1970.

For the next few decades, the building languished in decay—deserted, vandalized, and flooded. But the spirit of the Ktunaxa people prevailed.

In 1984 Elder Mary Paul said, “Since it was within the St. Eugene Mission School that the culture of the Kootenay Indian was taken away, it should be within that building that it is returned.”

Mary Paul’s vision of rebirth was carried forth by Chief Sophie Pierre, who had herself been a student at the school. The chief spearheaded years of rehabilitation of the old building. 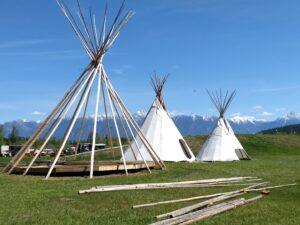 Today, the resort employs more than 250 people; many are descendants of former students of the boarding school.

Sophie’s son, Joe Pierre, is the current elected chief and delivered a moving blessing at the keynote dinner in both the Ktunaxa language and English.

Photos from the past decorate the hallways, including one that appears to capture a ghostly figure among the solemn faces of school children. A presence has been sensed in various rooms of the hotel.

In a location so steeped in history, how could a writer not be inspired?

Now to what I learned:

Renowned playwright/novelist Anosh Irani divides his time between Vancouver, where he teaches, and his native India. Anosh introduced two new writing terms I hadn’t heard before.

The first concept Anosh talked about was The Wound.

The wound can be literal, like a physical problem, a disease, an injury, a chronic condition that restricts and constrains the character’s ability to function. The wound can also be mental, emotional, or psychological. Unseen wounds often affect the character more deeply than physical ones.

Questions to ask while you’re writing:

Is the story driven by a deep-seated wound in the main character?

Is the story about healing that wound?

Is the character free if s/he cures the wound/achieves the goal?

The second term Anosh talked about was The Crucible, which immediately brought to mind the Arthur Miller play about the Salem witch trials. 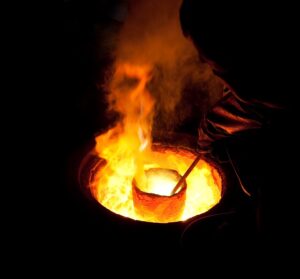 However, crucible also means: “a ceramic or metal container in which metals or other substances may be melted or subjected to very high temperatures.”

In playwriting, the author places the main character inside a container (the stage) under extreme pressure and temperature. The character is trapped. Unless s/he wins, there is no way out of that cage.

Before this workshop, I had not been mindful of a major difference between novels and plays:

In novels, characters may roam all over the globe in search of adventure or a solution to their problems.

But in plays, actors are literally trapped within the confines of the stage and cannot escape. The setting may change but the stage remains a limited space—a crucible.

That concept resonated with me. As novelists, we can borrow that crucible technique and put it to work in our stories. The more trapped your character, the more heat and pressure they are under, the greater the story tension.

For a marketing perspective, YA novelist/editor Jeff Giles entertained us with his funny essay about how not to promote a book. “See More About Me” describes a debut novelist who wrote 326 Amazon reviews for books by other authors but, in each review, shamelessly promoted his own novel.

Also during the weekend, Anna-Marie Sewell, Poet Laureate of Edmonton (2011-2013), and Danielle Gibson, a teacher and YA author, workshopped with half a dozen talented high school students. At the group open reading, the kids performed their work with the confidence and charisma of veteran public speakers. We in the audience listened in awe and muttered to each other, “I could never have done that at that age!”

St. Eugene was once a place where children lost their voices. There’s a sweet irony that new generations now find their voices there.

Conference organizer Keith Liggett, a ski journalist and award-winning cookbook author, sets up several writing events each year at St. Eugene. Top-name speakers draw participants from across Canada and the U.S. The next gathering will be in February, 2020. 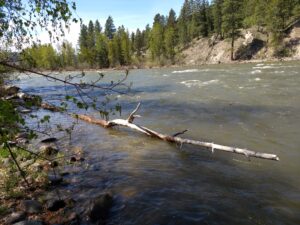 St. Eugene nearly descended into ruin as a relic haunted by dark memories. In the new century, it has experienced a renaissance, emerging as a major employer in the region and a thriving recreation destination and cultural center.

Elder Mary Paul would be pleased.

TKZers – Have you attended a writers gathering in an inspirational setting? What did you take away from the experience?