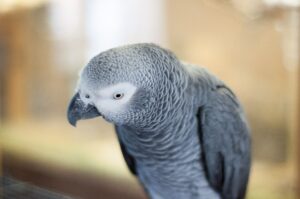 In 1958, Erle Stanley Gardner wrote a story where a chatty parrot’s “testimony” helped solve a murder. It became an episode of the Perry Mason TV show entitled “The Case of the Perjured Parrot,” teleplay by Marian B. Cockrell.

A real-life crime in 2015 gave a starring role to another talking parrot.

An African Grey parrot named Bud might have witnessed the murder of his owner and repeated what were perhaps the last words of the dying victim.

In May, 2015, Glenna Duram shot her husband Martin five times, killing him in their Sand Lake, Michigan home. She then turned the gun on herself, causing a non-fatal head wound. She recovered and was charged with Martin’s murder.

According to Martin’s mother, “That bird picks up everything and anything, and it’s got the filthiest mouth around.”

During Glenna’s trial, the prosecutor attempted to include Bud’s words in court but that request was denied. Even without the parrot’s testimony, there was enough evidence to find Glenna guilty of murder. She was sentenced to life in prison in August, 2017.

Here’s a video of Bud.

TKZers, what do you think? Is Bud a convincing witness?

10 thoughts on “True Crime Thursday – Could a Parrot Testify?”