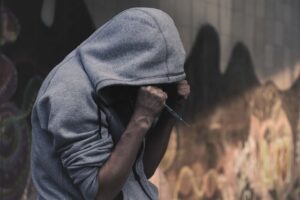 Joanie Brown opened one eye. The darkness had lifted. Light filtered from a slit in the ragged curtains covering the one window in the room, dust drifting down in the narrow beam. She breathed deeply and gagged. The stench of human filth and the sweet smell of pot overpowered her senses. Her head pounded, keeping time with her racing heart as she struggled to make sense of her surroundings.

Where am I? Why can’t I remember?

She lay on her back on a concrete floor. Under her fingers splayed out at her sides, she felt a gritty moisture. She hastily wiped her hands on her pant legs. She reached out and brushed a cold, rough wall with her left hand. Deep snores sounded from somewhere in the room, so she knew she wasn’t alone. Out of her one eye—the other one wouldn’t open and it hurt—she saw a closed door and four dingy gray walls. The floor was littered with bits of paper, discarded needles, condoms, and a filthy jacket tossed in the corner nearest her. She saw no furniture of any kind, except a soiled striped mattress across the room. She squinted at it, seeing a dark shape curled up on it. The source of the snoring, no doubt. The only other sound was the clack-clack of some insect as its feet raced across the hard floor. She scooted closer to the wall at her left and hoped it wouldn’t come her way. Joanie hated bugs.

She reached up and brushed thick hair out of her face, running her fingers over her other eye, wondering why she couldn’t see anything out of it. Now she knew—it was swollen shut. Wincing, she tried to pry it open. Her fingers came away with a smell of blood. She knew that smell. Her brain kicked into high gear now.

Memory now returned in chunks. Kyle. Where was he? The thought of him made her chest heave.

The last time she’d seen him, he was getting the crap beat out of him in a potholed alley littered with garbage and weeks-old refuse—by two thugs who’d dragged him there from the LA street corner where she’d finally found him. She’d hunkered down and watched from behind a dumpster reeking of rotting vegetables and month-old French fries.

Before that, she had spent hours searching for him.

Your writing is crisp, competent, and vivid. You immerse the reader in the scene by making good use of the senses—sights, sounds, touch, and especially smells. We’ve all caught a nasty whiff from a stinky dumpster and know exactly what you’re describing.

The sense of foreboding is strong. Something bad already happened and worse is yet to come—like bugs crawling over Joanie.

That said, I see two problems with this first page.

First, this opening has been done before. Editors and agents always ask for something “fresh.” They’ve likely read many submissions with opening pages about an injured character waking up in a strange place without any memory of how she got there. This may be an easy fix and we’ll get to that in a minute.

The second problem: lack of action. Almost the entire page is spent setting the scene—a filthy shooting gallery basement littered with drug paraphernalia, an unknown man snoring, Joanie’s swollen eye, and her confusion. She’s taking stock in a scary situation but she’s in the passive role of watching and waiting, rather than driving the action.

The last two paragraphs are a flashback: Joanie watches someone named Kyle, whom she’s been looking for, while he gets beat up. And she hides.

Let’s consider if the story would work more effectively if you start there.

A character getting the snot pounded out of him immediately piques the reader’s curiosity, even if it’s not yet clear who that poor soul is or why he’s being beaten. Is Kyle a mugging victim? A druggie who owes his dealer? Or did Kyle sell bad junk to the daughter of the guys who are stomping him?

What is the relationship between Joanie and Kyle? Is he her boyfriend? An ex-husband she’s been chasing for child support? Or perhaps her dealer?

Those answers lead to the next questions: Why has Joanie spent hours searching for Kyle? Did he run away? Does she desperately need a fix?

The most provocative question of all: Why is Joanie hiding? If she fears for her life, why not yell for help or use her cell to call 911?

Does she feel guilty for watching the attack without doing anything to help?

Or does she feel he deserves what he gets?

See what happens if you start with action? The reader is immediately engaged, wondering and guessing, rather than passively watching the scenery, even though the scenery is skillfully and vividly described.

Additionally, that avoids the need for a flashback, which always risks reader whiplash. Just as they’re settling into the story, you yank them to a different place and time. Why flash back when you don’t need to?

If, while Joanie’s crouched by the dumpster, you reveal her character in a way that makes the reader care about her and her quest, we’ll willingly follow her into the next scene in the basement.

When she wakes up, you can still use the vivid description of the disgusting drug den with discarded needles and used condoms. The only difference: it’s probably now page 2 instead of 1. And the reader is more invested in the story and characters.

Then introduce a new series of questions to intrigue the reader. Did Joanie try to stop the thugs and they turned on her? Did their accomplice sneak up behind her and knock her out?

While she’s lying on the floor, reveal her character more deeply through her thought process and actions. Does she crawl to the mattress to see if the snoring man is Kyle? Does she look for a way to escape? Does she grab a syringe and hide it as a weapon for when the bad guys come back?

Keep raising questions while building characters who make the reader care what the answers are.

One tiny nit: since dumpsters are usually emptied at least weekly, “month-old French fries” didn’t quite hit the mark. Otherwise your scents are spot on. Made me gag, but I mean that in a good way!

Brave Author, you have a promising beginning for a dark thriller/suspense novel. Thanks for sharing your work.

Over to you, TKZers. What suggestions do you have for today’s Brave Author?

Today is the last day to download Debbie Burke’s thriller Instrument of the Devil for only 99 cents. Here’s the link.