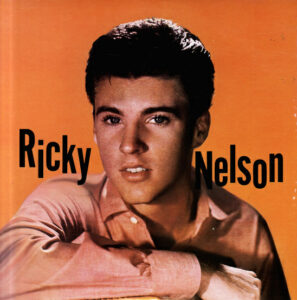 It was October 15, 1971, and former teenage idol Rick Nelson was one of the performers at an oldies concert in New York’s Madison Square Garden. Other acts included Chuck Berry, Bo Diddley, and Bobby Rydell.

Nelson, who’d had a string of hits in the late 50s and early 60s, sang a couple of his oldies, including one of his biggest, “Hello Mary Lou.” But then Nelson, who had been stretching his songwriting wings into country music, tried out a country-fied version of the Rolling Stones’ “Honky Tonk Women.”

Which is when the boo birds came out.

The unnerved Nelson gamely tried one more song, got more boos, then promptly left the stage. In fact, he left the building and did not appear onstage for the finale.

Back in California, Nelson holed up in his music room, and three weeks later came up with a song about his experience. “Garden Party” appeared in 1972 and reached number six on Billboard’s list. It was Nelson’s last hit song. He died in a plane crash in 1985 at the age of 45. 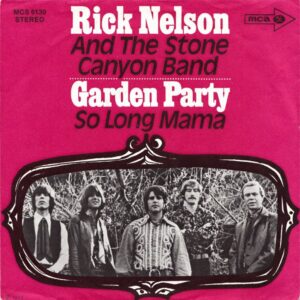 “Garden Party” tells the story of the concert in amusingly cryptic terms. Out in the audience, for example, “Yoko brought her walrus” (obviously John). And in the corner was a “Mr. Hughes,” the name used by Rick Nelson’s neighbor, George Harrison, whenever the quiet Beatle wanted to go out incognito.

But mostly the song is about being willing to pay the price for your artistic vision.

If you gotta play at garden parties, I wish you a lotta luck,
But if memories were all I sang, I’d rather drive a truck.
But it’s all right now, I learned my lesson well.
You see you can’t please everyone, so you got to please yourself.

As Rick’s son Gunnar later put it, “After a lifetime of pretending to be a character he wasn’t—wearing the sweater on Monday on the set of Ozzie and Harriet after being a real rock star on the weekends—he was writing and performing for his own pleasure and satisfaction. The song was based on his experience at Madison Square Garden. He turned what could have remained the darkest day of his life into his brightest shining moment. Just when the music industry considered him a relic, filing him away as yesterday’s news, he had the biggest hit of his career and it was totally autobiographical.”

My advice to writers (the ones who want to make a career out of this gig, at least) has always been to find that sweet spot where your love for the material meets commercial viability. Where your voice and vision lap onto the shores of reader expectation. Whip your story into a recognizable form, but fill it with the unique touches that can come only from you.

And know that when you do, there will be naysayers and critics. That comes with the territory. But if you’ve truly pleased yourself, it’s all right now.

What risks have you taken in your writing? How did it turn out? What did you learn from it?

25 thoughts on “You Can’t Please Everyone”