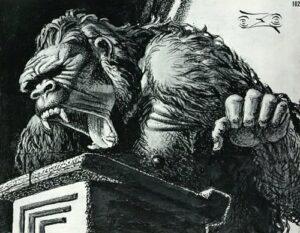 I want to speak to those of you who are at the early stage of what will hopefully be a long and successful career in the arts, whether it be with writing, performing, painting, sculpting, or whatever. Please note the word “hopefully” above. Many are called, but very few get there. I’m not attempting to discourage you. My attitude is that somebody is going to be successful and it very well might be me, or you, or both, so let’s go for it. Realize, however, that failure is a repetitive possibility, and that you have to be prepared to keep trying.

That said, I am going to strongly recommend that you watch a documentary about an artist — a sculptor — who briefly tasted success and quickly lost it before dying in obscurity. Success? We’re talking a government-sponsored museum devoted entirely to his work. That is success of a sort by any standard. Six years after the opening of the museum, however,  it was closed and virtually all of the artist’s work was destroyed, memorialized only by photographs and some miniature models which he recreated. The guy picked himself up, supported himself with jobs that were by any standard a poor use of his talent, and continued to work at what he loved practically up to the day he died.

I am referring to Stanislaw Szukalski. Odds are that you have never heard of him. I certainly hadn’t until a friend recommended Struggle: The Life and Lost Art of Szukalski, produced by George and Leonardo DiCaprio, whose family helped to support the man in the twilight of his life. The video, available on Netflix, is narrated primarily though not exclusively by Glenn Bray, a bibliophile and comic book collector. I want you to be as surprised delighted, depressed and as startled as I was so I am going to only give you the general highlights of what you will find. Bray discovered Szukalski’s work by utter happenstance in 1971 and became obsessed with it, the more so when he learned that Szukalski was living only a few miles away from him. Bray reached out to Szukalski and met with him, forging a friendship which lasted for some fifteen years until Szukalski’s death. Bray, who was active in the underground comic book industry, introduced artists in the medium to Szukalski as well. They had seen his work without knowing it, and in all probability you have as well. Szukalski designed one of the more intriguing and unsettling sets seen in the original film version of King Kong. It is his freestanding work, however, that is stunning. His sculptors and artwork are by turns breathtaking, disturbing, erotic, and startling. He never stopped creating, whether it be sculpting, drawing, or writing. Szukalski was also obsessed with the origins of humankind and the human condition. He devoted a significant amount of time researching and writing the theory of Zermatism, leaving the world several bound volumes containing over ten thousand pages of text and over forty thousand drawings illustrating and, to his mind, proving his point. He believed that humanity originated on Easter Island and that human beings have been controlled by…but you will want to watch Struggle to get the rest of that story. 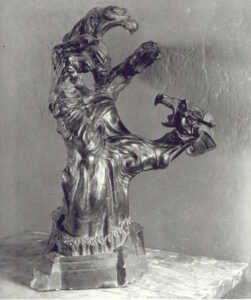 Struggle is loaded with comments from Bray, DiCaprio the elder, and various artists. There are also still shots of Szukalski’s work from the 1930s through the 1980s. The most interesting elements, however, consist of video recordings of Szukalski himself which Bray made and preserved. These are worth watching for many reasons, one of them being to observe Szukalski’s arrogance and charm co-existing simultaneously in the same place. Anyone who encountered Szukalski no doubt experienced approach-avoidance conflict. Szukalski may possibly have been wrong about some things but, if Struggle is to be believed, he was never in doubt.

The takeaway from Struggle — and it really rubs your nose into it, however unintentionally — is that real artists, and really, really good artists, don’t always succeed. They never, however, stop creating. You may not reach the heights of a James Patterson, Ernest Hemingway or Nora Roberts, but if you have a story to tell you need to — you must — keep trying to tell it. So endeth the lesson.

To take Jordan Dane’s excellent question of yesterday — what book first inspired you to write — a step further, please tell us: who or what motivates you to continue to create even as success might remain elusive? 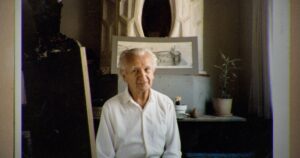 (All photographs and illustrations are (c) The Estate of Stanislaw Szukalski. All rights reserved.)

25 thoughts on “If You REALLY Want to Do This…”