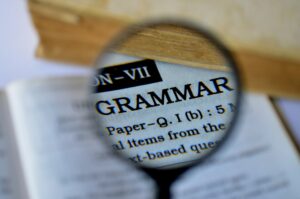 No, I’m not telling the ungrammatical to take a hike. But I am saying that without a basic understanding of certain rules of our language, your thoughts will be in danger of getting lost on the reader.

As a public service, here are a few of the errors I frequently come across so you, dear writer, may avoid them:

“Many young people today are disinterested in marriage.” WRONG.

A good umpire is disinterested in the outcome of a game, but he should never be uninterested.

Yet virtually every time I see disinterested it’s misused. Maybe people think it sounds more sophisticated. That excuse doesn’t interest me at all.

You’ll read or hear this almost every day. Like on the news, when a talking head spouts, “He said cows should be outlawed, which begs the question: Where will we get our steaks?”

Question begging is actually a fallacy of logic. It means someone has assumed, rather than proved, a premise. Thus, in a debate, you might hear, “My esteemed opponent has begged the question.”

This is a fight we’ve probably lost, but I can’t help digging in my heels. Whenever I hear someone on TV casually drop “That begs the question…” I always beg to differ.

It was drummed into us as kids that using me instead of I is wrong.

“Me and Henry rode bikes today.”

“That belongs to Henry and I.”

Wrong-o. But it’s a mistake made all the time. I heard this on TV the other day: “That means a lot to my wife and I.”

It’s (did you see that?) tricky because it’s is really a contraction, a combo of it and is; and its is possessive, but without the apostrophe.

When I’m typing fast, I sometimes make this mistake, and its it’s irritating. Just train yourself to take a little pause and ask, “Do I mean it is?” Then type accordingly.

E.g. is short for the Latin phrase exempli gratia, which means “for example.”

“There are lots of ways to lose money in Vegas, e.g., blackjack and craps.”

“The police who violated the Fourth Amendment—i.e., busted down the guy’s door—should have secured a warrant.”

In other words, e.g. sets up one or more examples, while i.e. supports just one clarification.

Also, when you use either of these babies in a sentence, they are lowercase and followed by a comma, e.g., The boys will get to pick among their favorite games, e.g., Bone Storm and Gilstrap’s Revenge.

My head literally explodes when I hear people misuse literally.

No it doesn’t, for literally means exactly, in a factual sense. People misuse literally because they think it provides added force to their point: He was literally as big as a house!

Don’t use literally unless you are trying to make clear an actual fact. And you don’t have to use figuratively at all. When you say He was as big as a house people will understand what you’re trying to convey. You don’t have to gild the lily, as they say (which reminds me that you should avoid clichés like the plague).

When something goes with something else and produces a nice effect, it complements the other thing. “Her orange scarf complemented her ensemble.”

A compliment is something nice you say about somebody. “The speaker paid Mrs. Hanson a compliment.”

You most often find this error when these words are used in their –ary form, as in this example I came across recently: “If you’re not sure where to begin, try taking a picture of a single book against a simple, complimentary (but not overpowering) background.”

No, the wallpaper is not paying the book a compliment.

Now, I admit I am no grammar expert. I still think a gerund is a fuzzy pet you keep in a cage. But when I’m unsure about some usage rule, I’ll pause to do a quick search on the internet, or look up the issue in one of my reference books (my favorite is Write Right! by Jan Venolia.)

So what are your pet peeves of language blundering?

75 thoughts on “Get Grammatical or Get Lost”