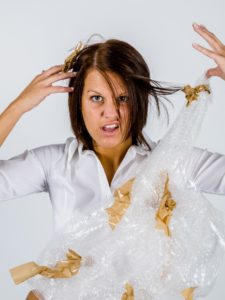 What is a plot snag?

It’s like when you’re walking along admiring some rose bushes and your coat gets impaled by a thorn. Forward motion halted. You have to stop, go back, and unloose your coat.

Only thing is, when you’re writing a book, you may not so easily identify what has snagged you. All you know is that you’re stuck.

A plot snag is not to be confused with writer’s block or a loss of enthusiasm for a project. Those are separate issues, which can be addressed in their own way.

What we’re talking about here is a point where you don’t know what to write next. It doesn’t matter if you’re a pantser or a plotter or a ’tweener. The best laid plans o’ mice and writers often go awry.

Let’s say you’re writing a thriller and you’ve got your hero backed into a corner. A literal corner, in an abandoned warehouse where killers are searching for him.

You don’t know how your character is going to get out of it.

Now, maybe you’ve got an outline, and know your plot’s direction, but this little conundrum has come up and you don’t know what to do about it. What you do know is that he’s going to somehow get in the back of a truck heading for Phoenix.

The question now is how to get him there. Try the following:

Brainstorm possible ways to get out. Go crazy. List six, seven, eight or more. Make your imagination work. You’ll get the answer. And if you need to plant something in the plot to justify this option (remember how Q always gave Bond the gadgets early in Act 1?) go back and plant.

The shadow story is what’s going on “off screen.” It’s what the other characters are doing when they are not in the scene you’re writing. What did you think? That they were all in their dressing rooms sipping Coke, waiting to be called ?

Brainstorm some of the possible actions going on, and one of them might offer something a character in the scene can do to unsnag things.

Going back to our warehouse, maybe one of the assassins is really a secret ally, and engineers our hero’s escape. Why? Because we did some shadow story where the villain discovers there’s a traitor in his camp! Now we can adjust our outline and plans accordingly.

If you’re stuck but anxious to get on with the writing, skip ahead and write a future scene. Let your subconscious work on the snag. Keep up your writing momentum. Tomorrow or the next day you can come back to fill in the gap.

It’s possible to whip through a first draft and avoid snags. You must write like a house afire, skipping plot “non-essentials” as you do.

And what is the purpose of this blazing method? Four things:

Here are some suggestions for a blazing first draft:

Instead of filling in the information that gets a character from one scene to another, leave a marker in that spot (like *** or &&&) and move on to the next scene. Concentrate on the action and dialogue.

Some writers put in a text reminder in ALL CAPS. For example:

SAM GETS TO THE OTHER SIDE OF MANHATTAN, BUT IT ISN’T EASY.

“Sorry,” the deli manager said. “I had to give your sandwich to somebody else.”

Don’t pause for descriptions. Fill those in upon revision. One benefit of this method is that you’ll know the overall tone of your novel and how each scene contributes. You can then tailor your descriptions with more efficiency. You can, for example, plant a symbol to foreshadow what’s coming later.

Emotional beats heat up a plot and get us bonded to a character. It’s an important part of the craft, and the deeper the emotion the more attention must be paid to it on the page.

For blazing draft purposes, when you get to such a moment in your story, jot a note, e.g.,

When you revise, you fill those in as needed.

Pro tip: When you go back to revisit emotional moments, look around for a more original emotion than you first envision. Sure, maybe anger is what you need, but what if you brainstormed other possibilities? Like elation or remorse? Perhaps one of these other emotions can conflict with the anger, so that you have that great beat called inner conflict. (Another tip: For brainstorming different emotions and techniques for showing them on the page, consult The Emotion Thesaurus by Angela Ackerman and Becca Puglisi.)

So how have you handled your own plot snags? Have you ever blazed through a first draft to discover and solidify your plot?

(For more on fast writing, see this detailed blog post by Janice Hardy.)

53 thoughts on “Unsnagging Your Plot”