Next year will be my 24th as a professional writer.

When my first book hit the shelves nobody used a cell phone (Seinfeld had that big brick handset with the antenna, remember?) O.J. Simpson had been found not guilty and Bill Cosby was still America’s most beloved dad. Microsoft released Windows 95. And a guy named Bezos launched a website that was purportedly going to sell books to consumers right over the internet! Everybody thought he was nuts.

For the seven years previous I’d been studying the craft of screenwriting and fiction, and writing every day. I devoured books on writing and gobbled up each monthly issue of Writer’s Digest. I have several shelves of my beloved writing books (and binders full of WDs), all highlighted and sticky-noted in some form or fashion. Every so often I like to pull one off the shelf to see what I highlighted, and relive some of the excitement of discovering something that worked for me.

The other day took down The Complete Guide to Writing Fiction by Barnaby Conrad, published by Writer’s Digest Books. It’s a collection of articles and interviews from the famous Santa Barbara Writers Conference, which Conrad directed for many years. 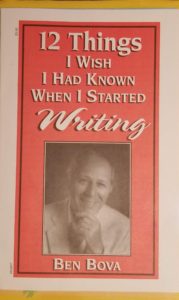 There was something tucked inside the book. It was a pamphlet titled 12 Things I Wish I Had Known When I Started Writing by Ben Bova, the science-fiction writer and editor. I think this came as a freebie with a book ordered from the Writer’s Digest Book Club, of which I was an enthusiastic member. So I had another look at Bova’s lessons and thought I’d reflect on them with you today. The first two are unsurprising:

All serious writing students know this, though I would edit the first one thus: write to a weekly quota. Figure out how many words you can comfortably write in a week, then up that by 10% for your goal.

Bova stresses the importance of well-rounded characters. Basic, of course, but coming from the sci-fi genre Bova knows it’s a temptation to overemphasize world-building.

I would change Problem to Plot, where plot is defined as a life-or-death battle which the character meets by strength of will.

This is Bova’s most important tip. The “villain” does not see himself that way. “Every tyrant in history was convinced that he had to do the things he did, for is own good or for the good of the people around him,” Bova writes.

I always counsel writers to know the bad guy’s “closing argument.” If he were on trial, what would he say to defend himself? And mean it?

My heart sang. Had Bova anticipated Write Your Novel From the Middle? Ahem. No. He was talking about the opening pages, and he echoes one of my constant refrains: act first, explain later. Bova explains:

[Start] your story in the midst of brisk, exciting action. Start in the middle! Don’t waste time telling us how your protagonist got into the pickle he’s in. Show him struggling to get free. You can always fill in the background details later.

Particularly in a novel, it’s tempting to set the scene, explain the protagonist’s background, describe how she got to where she is. Cut all that out. Or, at least, save it for later. Start in the midst of action. Hook that reader right away or you won’t hook him at all.

Don’t present a problem on page one and then solve it. Pile them up. “Each problem you present to the protagonist is a promise to the reader that there will be suspense, excitement, adventure in solving that problem.”

Bova makes a case for close 3d Person, so you can be intimate with a character in one scene, then cut away to another character, and so on. He does not favor First Person because he finds it too limiting. Hmm. Tell that to Raymond Chandler.

The last three tips come from another world, when hard-copy manuscripts were submitted to agents and editors. Imagine that!

“Typed, whether on a typewriter or a computer printer.”

Remember when that was an actual choice?

“Publishers think in categories. You must too.”

“And always remember to include the SASE.”

(For you kids out there, SASE stands for “Self-Addressed Stamped Envelope.” Ask your parents what that means.)

All this got me thinking: what is something I wish I’d known when I started out? I’ll give you a twofer:

I wrote four or five screenplays that didn’t generate any interest. What finally broke me through was an epiphany while reading Jack Bickham’s Writing Novels That Sell. Specifically, his chapter on scene and sequel. More specifically, understanding the scene beats of Goal, Conflict, Disaster. No more weak or meandering scenes after that. The next script I wrote got me an agent.

The initial thrill of being published eventually ran into a new set of challenges familiar to all writers who make it inside the gates of the Forbidden City. Stuff like comparison, envy, self-doubt, bad reviews. All of which interfere with the joy of writing. Faith and family were in place for me, but I also studied specific topics like gratitude, contentment, focus, and discipline. So important are these that I wrote a book to help writers prepare for and deal with the mental game of writing.

So, TKZers, if you’ve been around the block, what is something you wish you had known when you were starting out?

And if you are just starting out, what is something you want to know? Ask away, and one of our crack team of bloggers will take a flyer at an answer—for I am in travel mode today and my check-in may be sketchy.