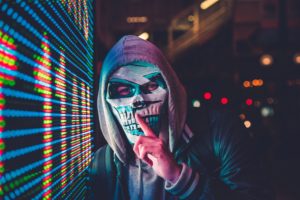 Hello, Anon, and thank you for submitting the beginning of Skeleton, your work in progress, to us at The Kill Zone for our First Page Critique. Let us begin:

I slammed to the ground. A boltof pain cracked through my body then slid away. A dull throb took its place.The bust-up was the right arm. Between elbow and wrist. I looked at my arm and flexed it. A jagged edge of bone stretched the skin up. A dagger of horror seized my brain. My core instinct said not to move. But I had to get home.

I staggered to sloppy feet, heldthe damaged wing close to my body and stumbled down the sidewalk. As long as I didn’t move the arm, pain was secondary to fear, the ‘my mother will been raged’ type fear. What were you doing swinging from limbs of that pine tree in the first place? I could hear the shrill voice echo those words. But how mad could she get? I mean today was my tenth birthday and how mad could a mother be at her only daughter’s tenth birthday party? And why was I thinking about that now, twenty-five years later as I sat in a chair, high, wing back, cloth I thought. I couldn’t move. I could turn my head, but nothing below the shoulders worked. Maybe that was the connection. I couldn’t move the broken arm then and I couldn’t move anything now.

The room was gold and red with a hint of incense in the cold air. It was something out of an Agatha Christi novel. I swallowed, took a deep breath, scanned the room with my eyes. Floor to ceiling heavy draperies. A gold statue of a ten-inch Buddha in the corner. Thick tapestries hung on walls depicting combat with horses, spears and doomed men. I wasn’t stressed. My practice of daily meditation born of my Buddhist belief kicked in. I remained calm, focused.

A solid door, painted deep gold with carvings of dragons creaked open and he walked in. He was maybe five feet five inches, stocky build poured into a three-piece suit, vest and all the trimmings.

He carried a single manila folder, walked in front of me and sat in the edge of a leather topped captains’ desk. His eyes were set close to a narrow nose; the only hair on his head was a tight goatee, closely groomed. He dropped the folder on the desk, crossed his arms and a small puff of air expelled through soft nostrils. He was Vietnamese. Some of that blood ran through me. I knew his essence.

“There has been a mistake,” he said in a voice that sounded like he was telling me a bed-time story.

“I must apologize,” he continued.” This is embarrassing at the least and inexcusable at best. This is not how I operate. Pressure applied from the client should not influence how results are obtained. However, to be human is to err human. And that misfortune is what has brought us together.”

Thank you for submitting, Anon. Please permit me to be blunt.  The bad outweighs the good here. I had a lot of trouble with the first couple of paragraphs of Skeleton because they are confusing, poorly written, and full of typographical errors. It gets better further down the page. Most editors, assistants, and agents (not to mention readers) wouldn’t have gotten that far, however. They would have read the first paragraph or two and told you that they weren’t interested if they told you anything at all.

First: please proofread. You have words running into each other, you misspell “Agatha Christie” as “Agatha Christi” — oh, the humanity! — and use a hyphen (“bed-time”) where you shouldn’t. Also please format. Lynne, the wonderful person who, among many other tasks, sorts these First Page Critiques out and sends them to us at The Kill Zone, mentioned to me that when she originally received Skeleton it had not been formatted. Putting it into Google Drive improved it but if your prospective agent or editor wants your manuscript in Word they’re going to be unhappy if you don’t format according to their specifications. Get you indentations, headers, footers and spacing all together and consistent. Yes, sometimes one or more of these things jump for some reason. Send it to yourself first and make sure it looks like you want it to. If it doesn’t, find out what is wrong and fix it.

Second: It’s fine if you want to jump from the past to the present, but give your reader a chance to get the thread of the story first. One minute your protagonist is ten years old, the next she is thirty-five. If you want to start off with the past, fine, but let us know as soon as possible that we’re in the narrator’s past. Try something like this:

I broke my arm on my tenth birthday. I was swinging from a tree limb and let go either too soon or too late. I’m still not sure which, a quarter-century after the fact.  I had been looking forward to my party in one moment and in the next I was falling and then screaming as I fell. I hit the ground hard and a bolt of pain cracked through my body. It was quickly replaced by a dull throb in my right arm, between the elbow and wrist, where a jagged piece of bone now stretched the skin upward where it never should have been. I was horrified. I just wanted to lay there but I had to get home. My pain was secondary to fear. I was afraid of my mother’s reaction, even though it was her only daughter’s birthday, or maybe because of it. I could hear her shrill voice in my head before I even got home. “WHAT were you DOING swinging from the pine tree in the FIRST place?!” I was good at predicting how people, whether families and strangers, would react, even back then.

That takes care of the past, Anon, and we know it’s the past. Now let’s transition to the present:

I couldn’t move my broken arm back then. Flash forward to the adult me, sitting in a high, winged back chair. I couldn’t move at all. Oh, I could turn my head, but nothing below my shoulders worked. The range of vision which I had wasn’t much. Maybe that’s why I was thinking about that immobile broken arm now. I didn’t appreciate how good I had it as a kid.

Three: I kind of like how you describe the man, but I’m not sure if your protagonist knows who or what he is. Let’s fix that up. And while we’re doing that, tell us a bit about your narrator:

The range of vision which I had wasn’t much, but I could see enough to know that I was in trouble. There was a solid door, painted deep gold with carvings of dragons, in the wall in front of me. It creaked open and a stranger — maybe five feet five inches, with a stocky build poured into a three-piece suit, vest and all the trimmings — walked in. He looked Vietnamese, a little like me. I nicknamed him “Diem” in my head. He walked over to the captain’s desk just inside my right field of vision and sat down, dropping the manila folder he carried on a desk blotter. “I’m sorry, Miss Tree,” Diem said. Oh, so he knows me, I thought. “There has been a mistake.” He crossed his arms and a small puff of air expelled through the soft-looking nostrils in his narrow nose, framed by his close-set eyes. ”This is embarrassing at the least and inexcusable at best. It is not how I operate. Pressure applied from the client should not influence how results are obtained. However, to be human is to err human. And that misfortune is what has brought us together.” The ceiling lights reflected off of Diem’s bald head, an expanse that was uniform and undisturbed until it reached his tight, closely groomed goatee. I thought of a crude joke about beards that my ex-husband used to make, a joke that I hated when we were married. Now, sitting in that room with a stranger in front of me and all but unable to move, I had to force myself to stop laughing.

I hope that helps, Anon. Your concept reminds me just a little of the Sax Rohmer books which I absolutely adored in my youth (and which I still do, actually). There’s promise here. You have a story, but you don’t have a book or even a first page just yet. Check out the books which my fellow TKZers have for sale about the craft of writing, get one with the basics, study it closely, and go for it. Good luck.

I will now attempt to remain uncharacteristically quiet while our wonderful readers, visitors, and contributors make their own comments. Thank you for submitting to us, Anon, and keep trying.

13 thoughts on “The Bare Bones of a Story: SKELETON, a First Page Critique”