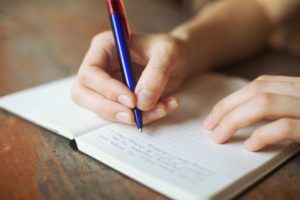 I was thinking about the way people ask me where I get my story ideas. It’s a classic but awkward question, especially if my ideas are at a low ebb right then and I’m certain I’ll never have another idea for a story. It’s like when my son complains and complains that we never have anything interesting for dinner, and I ask him before I go to the grocery what he would like me to make. Usually he can’t think of anything right at that moment and gets frustrated. (The answer is, more often than not, tacos. Something I make frequently.)

There are times when I can’t come up with an idea to save my own life. It’s embarrassing to admit, especially because I also have to write all of my ideas down quickly or they’ll slip away and eventually find some other writer to express them.

A writer I admire once told me that if you can’t keep an idea alive in your head, then it’s not actually a good idea. While I can see a vague point to this–some ideas demand to be written immediately–I mostly disagree. People sometimes get obsessive even with bad ideas. I frequently consult my banked story ideas in both the fallow times and the flush. I find that I can pretty much make a story out of any of them. And that’s reassuring.

My usual answer to anyone who asks about where I get my ideas is:

“Oh, everywhere. I never know when I’m going to run across a crime story online or see something on the news.”

What’s going through my head:

“Dear God, do you know how much time I spend making notes on or bookmarking stories? There are crime and news websites that I stalk relentlessly.  Or I’ll be reading a book someone else has written and a character says something that catches my imagination, and I stop reading and start daydreaming. Then there’s my childhood. Someday that gorilla in the Pepto-Bismol pink bathroom I dreamed about when I was five is going to have its own kid’s book. And I was the proverbial little pitcher with big ears, soaking in the stories and gossip around the grown-ups card table. Throw in emotions, dreams, overheard personal dramas, the sociopath I went on two dates with before things got super weird and I eventually had to leave town for good. Don’t forget the divorce played out in my kid’s carpool line, and the woman with the severely bitten nails in the waiting area of the therapist’s office.”

Here’s one of my favorite character quotes. It’s from Ariadne Oliver, a writer who shows up in several Poirot stories.

“I mean, what does one say about how one writes books? You just think of an idea and force yourself to write it.”

Just think of an idea. No biggie.

Do you keep files or idea banks of ideas, or do you wing it? How do you approach the where do you get your ideas question?

25 thoughts on “The Getting and Keeping of Ideas”