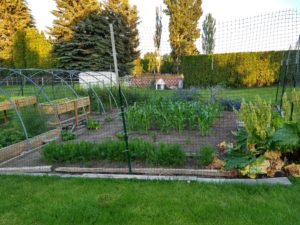 Join me today as we get down and dirty to root out a few parallels between gardening and writing.

The first few years we lived in Montana, a handful of warm, sunny April days always fooled me into thinking winter was over. Sparkling blue sky lured me outside where I chipped through ice to dig up black dirt. New life abounded—robins scouted for nest locations in the bare branches of apple, pear, and apricot trees that were just starting to bud. I couldn’t wait to get seeds in the ground.

Inevitably I planted too early—a spring blizzard usually dumped a foot of new snow the next day and the seeds never germinated. I’d have to buy more and try again weeks later when the weather finally warmed for real.

In those early days, I sent out novels that weren’t ready. In my eagerness to get published, I was blind to immature plots that needed more development and characters that didn’t ring true. Market conditions, pfft! Who needs to worry about that?

Often those submissions resulted in biting blizzards of rejection.

Veteran Montana gardeners know to plant corn seeds three times in succession. The first batch rots because the soil is still too cold and wet; crows gobble the second round; with luck, the third grows and produces.

Nine earlier novels of mine didn’t make the grade. But I kept replanting to hit the right editor/agent at the right time. Gardeners and writers must be persistent and never give up.

Gardeners and writers must play the long game. Cherry trees don’t bear for seven years after they’re first planted. Books may require similar time from the initial seed of an idea to publication.

I’m more patient these days, willing to give my stories enough time to grow and ripen.

While my hands root around in the dirt, my mind stays busy digging out a more compelling plot, digging into the puzzling psyches of difficult characters, or digging out of the inadvertent rabbit hole I burrowed into.

Sometimes my mind winds up as muddy as my body.

Dandelions, black medic, and quack grass keep coming back no matter how often I pull them. Same with stubborn writing problems. Someone needs to invent Roundup for word tics, repetitions, misspellings, and excess verbiage.

6. Some crops do better in certain years than others

This July’s raspberries ripened fat, sweet, and juicy, while last summer they yielded only hard seeds. Peas that had been plentiful in the past did poorly this year, no matter how much I pampered the vines.

Sometimes I’ve written articles because the subject fascinated me yet they never found their way into print. Other stories I thought were ho-hum surprised me when editors accepted them and asked for more. Perhaps I was trying to sell peas in a market looking for raspberries.

Rogue deer crash through the mesh fence and claim the salad bar for themselves. Aphids suck the life out of tomato plants. Grasshoppers strip plants down to mere stems. A freeze in August can destroy the harvest overnight.

Even so-called foolproof crops aren’t immune to whims of nature. One year I dug up what promised to be a bounty of potatoes to find voles had eaten the insides of every single spud, leaving only hollow shells behind.

After almost three decades of novels being rejected, my thriller Instrument of the Devil was published last year. The editor expressed strong interest in the second book in the series, Stalking Midas. I’d finally made it.

Six months later, the publisher closed up shop. Voles ate the heart out right of that potato crop.

8. Seasons ebb and flow in the garden and in writing

Here’s the current ebb and flow in my career:

Although I’m back in the submissions grind, at least I have lots of practice.

The first draft of book 3 in the series is close to complete and I’m still excited about the story.

Marketing keeps me spinning my wheels in the mud.

This regular gig at TKZ is great fun. I get to write about my passion, interact with interesting authors, and learn. What’s not to like? 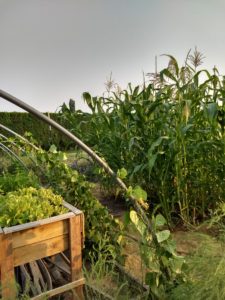 “The corn is as high as an elephant’s eye”

Today in my garden, “the corn is as high as an elephant’s eye,” to quote the classic Rodgers and Hammerstein musical Oklahoma. In a few weeks, I look forward to breaking cobs off the stalks, rushing inside to nuke them in the microwave while still in their husks, then slathering them with butter. In that first burst of flavor, the memory of sore muscles from stooping, bending, and digging fades into the background.

But if a September hailstorm strips the garden bare, there’s always next spring with seeds of a new novel to plant.

TKZers, where are you in your seasons of writing?

Even though Debbie Burke is searching for a new publishing home, Instrument of the Devil remains available on Amazon here.

20 thoughts on “Eight Lessons from Digging in the Dirt”