“For a long time now I have tried to simply write the best I can. Sometimes I have luck and write better than I can.” – Ernest Hemingway

There’s an old joke about a guy who gets paired with a priest for a round of golf. They hit the first green in regulation. The priest has a thirty-foot putt with a big break. He crosses himself and drains the putt. 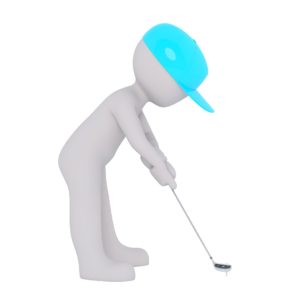 The guy misses a five-footer.

On the next green, the priest crosses himself and nails a fifteen footer. The guy misses his.

Same story on the third green.

As they’re about to tee off on the fourth hole, the guy says, “Father, I noticed what you do before you putt. You think if I crossed myself I’d start making mine?”

The priest says, “It couldn’t hurt, my son.”

On the fourth hole the guy has a straight ten footer. He crosses himself, putts, and misses.

“So what happened?” he asks the priest.

And the priest says, “Well, it helps if you can putt.”

Which is how I feel about the whole how do I sell more books issue.

For many writers out there, unleashing a plethora of fancy marketing tricks is like crossing yourself. It can’t hurt. But to sell and keep selling, it helps if you can write.

The data backs this up. For example, BookBub recently put out an infographic based on a survey of their subscribers. Natch, most of them use BookBub to select new titles. But from there, two old reliables assert themselves as the largest slices of the book-buying pie.

The biggest factor is word of mouth. Overwhelmingly (and it has always been thus) people buy books they hear about from trusted sources. This usually means someone they know and can rely on, but also includes online communities such as Goodreads and well-trafficked blogs.

The other big slice is when an author someone has enjoyed in the past comes out with a new title. Once this happens a couple of times, the author has made a fan.

And how are fans created? By really good reads.

The $64,000 question (for those of you who remember the cultural derivation of that term) is this: What constitutes a really good read?

I am going to tell you.

Thanks for stopping by!

Okay, here’s what I mean: It depends on your genre, your voice, your professionalism. It means you are able to write a book that not only meets expectations, but in some way exceeds them.

In other words, not just the “same old.” Because we’ve got too much of that. It means adding your own special something to the story.

I think of the old pulp writers. Who were the ones who caught on and were able to sell issue after issue, book after book?

Raymond Chandler, who could write description and dialogue like a trench-coated angel.

Erle Stanley Gardner, who could create twisty-turny plots featuring the smartest lawyer in the world.

Robert E. Howard, whose voice was as big and bold as the Texas winds that raised him.

Max Brand (real name: Fred Faust), the most prolific of them all, who elevated the standard Western into something that reaches into the soul.

I could go on, and we all can create our own list of favorite writers. What they will have in common is storytelling ability and “something more” that resonates with us.

Marketing only gets you an introduction. It’s your writing that does the heavy lifting. Which is why I offer a free novella to those who want to sample my wares. That’s a fair exchange. It’s like an arranged lunch date. As long as I don’t have broccoli in my teeth, maybe a reader will want to read more of my stuff.

So to you writers just starting out, or are trying to get a foothold in the market—keep learning and growing. Yes, you’ll need to lay a marketing foundation (e.g. a website, a bit of social media presence).

But keep the main thing the main thing: Always strive to write your best and sometimes you’ll have good luck and write better than you can!

20 thoughts on “It Helps If You Can Write”