About a month ago Mrs. B noticed a nest starting to form under the eaves outside our front door. We began to keep an eye on things and saw a couple of doves flitting about. We started calling them Mr. and Mrs. Dove, and were happy they’d decided to build a home attached to ours. We thought it a perfect spot, too, out of the reach of our neighbor’s cats.

Then a couple of weeks ago we noticed Mrs. Dove sitting in the nest each time we went out our door. Just sitting there, day after day. Obviously, a happy event (or two or three) is about to hatch.

There was also a stretch of days when we didn’t see Mr. Dove at all. I told Cindy, “I hope he’s not out having a worm with the boys.” I imagined a Far Side-style cartoon of a couple of male doves, with fedoras pushed back on their heads, holding martini glasses with worms in them. I imagined them in a bar called The Wiggle Room.

But I digress (I wish I could draw!)

Then one day I was sitting in my courtyard which offers a view of the pitched roof above the place where the nest is. And I saw Mr. Dove walk across it, one end to the other. He continued to higher ground, the jut of our garage roof, where he could survey all of the territory around the house.

He was protecting his wife and kids. So I took this picture: 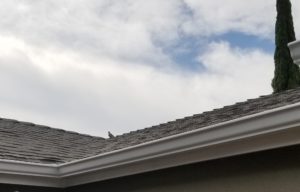 Mr. Dove on the lookout

My admiration for Mr. Dove went up a mile. Good man! Good bird!

Which is how readers respond to characters. Not by what they feel, but by what they do. When we see a character acting with strength of will in pursuit of a worthy goal, we begin to care, and only then does emotional response deepen the experience.

As the great writing teacher Dwight V. Swain put it in his book Creating Characters, all “traits are abstract and general. Behavior is concrete and specific. ‘What does he or she do?’ that demonstrates any given point is what’s important.”

Over the years, as the teaching of the writing craft became mainstream, two approaches emerged that occupy the same relationship as plotters and pantsers. For our purposes I’ll refer to them as the Dossier Doers and the Discovery Kids.

With a dossier, the writer constructs a thorough background of the character before the actual writing begins. Marcel Proust was this kind of writer. He developed an extensive questionnaire for his characters, with such queries as:

You can find Proust’s questions, and other character-building questionnaires online. I have nothing against this method if it works for you. The caution I have is that when you do it this way, you pretty much lock in that character to the profile you create. As your story unfolds, the slings and arrows of the plot might operate to an extent that you wish your character had a different background altogether.

With the discovery method, you begin with a certain degree of knowledge, but then let the character react in the various scenes and watch them grow along with the story. Some authors prefer to do a first draft and then, upon rewrite, add layers to the character. “You simply can’t foresee all the facets of a story’s development,” says Swain, “and trying to out-guess every turn and twist may hang you up for longer than you think.”

Personally, I get bored quickly if I have to fill out a long questionnaire, or write a comprehensive biography. I’d rather add things as I go along, in keeping with the needs of the plot.

Which is not to say I start with a blank slate. I do need a few things in place before I get going. At a minimum they are:

A Visual. When I see the face of my character, it automatically starts the cauldron bubbling with possible characteristics. So I immediately figure out my character’s age and then go looking on the internet for a headshot that reaches out and says, “I’m your character.” I want the image to surprise me a bit, too.

A Voice. I begin a voice journal, which is a free-form document of the character talking to me. I may prod them with questions, but I mainly want to keep typing until a distinctive sound begins to appear. As a bonus, what the character tells me about their background may prove useful in the book.

A Want. What is the thing this character, at this point in time (as the story begins), want more than anything in the world? To become a great lawyer? Nun? Piano player?

A Mirror. As TKZ regulars know, I am big into the “mirror moment.” So I begin to brainstorm this early. It’s subject to change, but I’m finding more and more that it operates as my North Star, shining its light on the whole book. Knowing it up front is a tremendous help.

A Secret. I’ve found this to be a useful item to have in your back pocket. What is one thing character knows that he doesn’t want any of the other characters to know?

After my Lead is given this treatment, I move to my other major characters and go through this process again, paying special attention to casting for contrast. I want there to be the possibility of conflict among all the cast members.

Along the way I’ve constructed my signpost scenes, so pretty much have the plot trajectory down.

Now I write, and as I do I allow the characters to help me flesh out the scenes which, in turn, adds layers to characters.

For instance, let’s say I know I’ll have a scene early where my lawyer, a woman, is told by one of her senior partners to quickly settle a case. She doesn’t want to. She thinks it’s a winner. At the end of the scene, the partner has issued her a mild threat—play ball, or your future here is limited.

In my mind, this scene would leave my lawyer angry and maybe a bit afraid. This is supposed to be her dream job. So she goes back to her office and writes an angry email to the partner. Then deletes it.

Then I’ll ask, what if she does something else? What if she quits? Maybe this is just what she needs to do at this point in her life! I could then construct a bit of backstory about how she was afraid to do something as a little girl, how a boy taunted her for that, how she’s never taken a risk. And now she finally does.

Or what if she leaves work and goes to a bar and gets hammered? Hey, maybe she has a drinking problem.

You get the idea. The layers get added. And upon rewrite, they can be deepened and secured.

My wife and I are anxiously awaiting the birth of the little doves. I wonder of Mr. Dove will be puffing out his chest a little bit more when it happens. Hmm, maybe when he was a young dove he had an encounter with a cat, and…

So what is your preferred method for building characters?