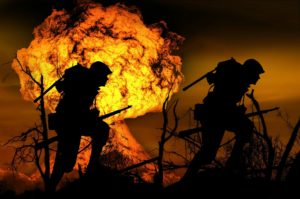 Greetings, first-page-critique fans. We have another one for you today, with my comments following. Pick up your favorite blue pencil, but don’t do anything with it, as it might damage your screen. Here we go:

The two camouflaged motorcycles approached the intersection from the east in a bowl of dust, and the soldier in front raised his hand to signal a stop before skidding to a halt. The second biker pulled up next to him, and they carefully observed their surroundings before they cut the engines. They sat motionless for a few moments, and listened for any sounds from the dense vegetation and trees around them. The first rider pointed to the intersection and identified the four spots where the disturbances in the road indicated the presence of landmines. He took his binoculars from the bag strapped to his chest, and scanned the area before he zoomed in on the identified spots. The mines were strategically planted in the middle of the intersection, and he noticed a wire connecting the four mines, lightly covered with gravel. He knew they were booby-trapped and if one were triggered, all four would explode in a split second.

They felt the vibration before they heard the sound of the vehicle approaching at a very high speed. Charlie looked up from the map he was balancing on the handlebars of his bike. Keith lowered the binoculars and turned to Charlie with a frown.

“What are they doing on the road? We have not cleared it yet?” Keith said as he got off his bike and reached for his rifle strapped to his back. He turned his head sideways to identify the direction of the sound and approaching vehicle. They both looked up and saw the dust rising above the trees to the south of the intersection as the sound became louder. They realized the danger at the same time and as Charlie grabbed his rifle from his back, he shouted to Keith.

“Hit the deck! They are not going to stop!”

They scrambled in opposite directions to the side of the road, slid underneath foliage to take cover, and rolled over to face the intersection. The black Mercedes Benz entered the intersection at high speed and detonated the first landmine with the left front wheel. The explosion of the first mine hit the rear end of the car, and the chain of explosions propelled the car forward in pieces of junk and parts that flew in all directions. The second mine struck directly under the engine which became airborne and landed a few hundred yards away from the rest of the car. It all happened in super slow motion.

JSB: We’ve got the raw material for a good opening page here. I like a thriller that begins with a Mercedes blowing up. But like all raw material it has to be refined. The first problem is, not surprisingly, Point of View. (I say this, author, so you’ll know it’s quite common. Once you get a real handle on POV your fiction will be 80% better.)

You start us out in Omniscient POV. There’s nothing technically wrong with this if you later drop us into Third Person. This move used to be done all the time, where the opening chapter would take a wide-angle view of a setting before focusing on a character. The famous opening of Grace Metalious’s Peyton Place is like that:

Indian summer is like a woman. Ripe, hotly passionate, but fickle, she comes and goes as she pleases …

The town lay still in the Indian summer sun. On Elm Street, the main thoroughfare, nothing moved. The shopkeepers, who had rolled protective canvas awnings down over their front windows, took the lack of trade philosophically and retired to the back rooms of their stores where they alternately dozed, glanced at the Peyton Place Times and listened to the broadcast of a baseball game.

This goes on for several pages before Metalious gives us the protagonist, Allison McKenzie.

Today’s page, however, doesn’t use omniscience for a wide-angle view of the setting or the circumstances. Instead, the focus is on two riders, who are given names in the second paragraph. Thus, there is no reason for the omniscient beginning. It merely operates to keep us at a distance from the people involved.

Further muddying the waters is something that should never be done—simultaneous POV. Whenever you have a collective “they” feeling or thinking or hearing the same thing, we’re in more than one head and our attention is split. It also violates common sense about life. No two people ever feel or think or perceive in exactly the same way.

they carefully observed their surroundings

They felt the vibration

They both looked up and saw

They realized the danger at the same time

This dilutes the scene and robs it of emotional impact. So my main piece of advice is to re-write the whole thing from either Charlie’s or Keith’s POV. Have all the observations filtered through one of them. This is how readers relate to story. The first thing they want to know about a scene is WHO it belongs to.

Now, regarding the setting. I have no idea WHERE we are. There’s dense vegetation, but also an intersection. There’s camouflaged motorcycles and a black Mercedes. You use the terms soldier, rider, and biker interchangeably.

Where are we? What are the circumstances? War zone? Drug zone? South America? Africa? Soldiers? Mercs?

You can easily use dialogue and interior thoughts to give us essential information. When I advise act first, explain later I’m referring primarily to backstory. That can wait. What we need up front are a few drops of context, which can be woven in with the action.

Decker told the Italian immigration official that he had come on business.

“The length of your visit?”

He carried his suitcase from Leonardo da Vinci Airport, and although it would have been simple to make arrangements for someone to meet him, he preferred to travel the twenty-six kilometers into Rome by bus.

Now a technical question: Can you see landmines? I thought the point of landmines is that they’re hidden and finding them requires some kind of metal detector or radar or robot. If I’m wrong I’m still raising a question many readers will have, so you should clarify it, once again with a bit of dialogue or interior thought. Because this book seems intended for military-thriller fans, every detail of an operation has to be accurate and precise or you will surely hear about it from readers and reviewers.

Style note: When using a dialogue attribution, it goes after the first complete sentence or clause.

NO: “What are they doing on the road? We have not cleared it yet,” Keith said.

YES: “What are they doing on the road?” Keith said. “We have not cleared it yet.”

Or the attribution can be placed before the dialogue:

Keith said, “What are they doing on the road? We have not cleared it yet.”

You can also use an action beat before the dialogue:

Keith lowered the binoculars. “What are they doing on the road? We have not cleared it yet.”

One last note on dialogue (because it’s the fastest way to improve any manuscript). Make sure it’s true to the characters. Would Keith really speak without contractions? Probably not. Thus:

“What’re they doing on the road? We haven’t cleared it yet.”

Finally, as we’ve noted many times here at TKZ, white space is a reader’s friend. Your paragraphs are too “blocky.” Don’t be afraid to break them up into two or three.

So, author, I do want to know who was in that Mercedes, who Charlie and Keith are, and where they are operating. I also want to know whose scene this is. Clarify those things, and I will likely turn the page!

The floor is now open for further critique.