I have just returned from my annual sojourn to Las Vegas and the SHOT Show, so I thought I’d turn away from the craft of writing in this post, and back to some tactical topics. Throw in the bullet-bait Brother Bell inserted into his always-excellent post last Sunday, and I feel driven to talk about bullet stuff this week.

First, on the issue of being thrown back by bullet strikes, consider this: Newton’s Third Law of Motion dictates that every action has an equal and opposite reaction. If the energy of a bullet strike is enough to throw the bad guy back five feet, then the shooter would fly back a similar distance. When it comes to handguns, the shooter feels more linear force in recoil than the target feels on impact. And remember, once a round leaves the muzzle, it is constantly slowing down. And falling.

Because bullets travel as fast as they do, on impact, they exert all of their damage over the course of a millisecond.  In through-and-through wounds, victims often don’t know for a few seconds that they’ve been shot.  Bullet dynamics being what they are, I have shot empty Styrofoam cups through-and-through with pretty hot rounds, and watched the cups never move.  When a bullet passes through tissue, the ballistic damage it causes actually manifests behind the moving projectile, not at its point.  (The link goes to a video where there’s no blood, so it’s safe for mealtime viewing.)

Brother Bell, I will take exception to your left-hand-shooter speed bump.  Most shooters I know make it a point to train with their weak hand, specifically planning for the event when their strong hand is immobilized.

Bullets are specifically designed to inflict ballistic damage to tissue as it passes through its intended target.  Handguns are intended for close range, and rifles are designed for longer ranges. (A SEAL buddy of mine maintains that the only good use for a pistol is to fight your way to your rifle.)  As a rule, additional range means additional ballistic energy, and a concomitant increase in ballistic damage on impact.

Here’s a video showing a 9 millimeter pistol bullet being fired into ballistic gelatin.  For those who can’t watch the footage, it shows a standard round-nosed bullet passing all the way through the gelatin block with little of its energy expended along the way.  Bottom line: it would suck to be the guy standing behind the guy who got shot, because you’d get shot, too.

This over-penetration issue is specifically why most (all?) police agencies have moved to hollow point ammo. The definition is simple and self-explanatory.  A hollo 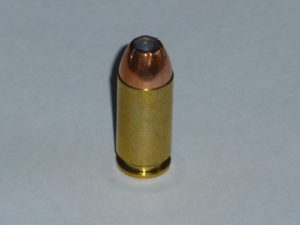 w point bullet is one that has, well, a hollow point. It is different than “full metal jacket” (FMJ) ammo, which is also called ball ammo. It’s been around for a lot longer than I have, and it comes in pretty much any caliber you can think of.  Old farts who haven’t kept up with technology will tell you that hollow points cannot be fired from semi-automatic pistols, but they’re wrong. HP bullets used to be a problem because of issues with the feed ramps in old pistols, but that problem was solved a long time ago.

In the pictures, note the lines around the circumference of the the tip. When a hollow point bullet

impacts a target, its “petals” bloom, causing the the projectile to tumble and lose most of its energy. The wound channel is significantly enlarged in the process. Within the gun industry, and among knowledgeable people, hollow points are also call “personal defense” rounds (as opposed to range ammunition) because they are the preferred choice in a gunfight–but probably not for the reasons you think.

This video shows a 9 millimeter HP round hitting ballistic gelatin.

There are a couple of take-aways from the video. First, HP bullets do leave a significantly larger permanent wound channel than that which is left by ball ammo. But second, and more importantly, the bullet stays inside its intended target.  Even if there were to be over-penetration, the vast majority of the energy would be dissipated before the bullet could hit a second, unintended target.  That said, if your characters are anticipating the need to shoot through car doors or windows, HP would not be their first choice.  Yes, HP bullets will penetrate both, but that loss of energy could be a factor.

Next time, we’ll talk about what every police drama gets wrong when it comes to storming the bad guy’s house.

All questions are welcome.

And since you’ve read this far, please consider subscribing to my YouTube channel, A Writer’s View of Writing and Publishing.