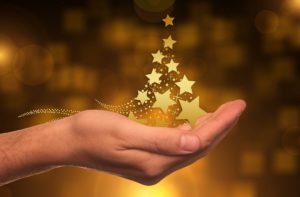 So here we are at the end of another Kill Zone year. (We’ll be taking our traditional two-week break starting tomorrow.) It’s been an amazing run for this blog, which began way back in August of 2008. I’m in awe of my colleagues, both present and emeriti, for the depth of their wisdom and generosity of spirit toward the writing community.

Emeriti, by the way, is the Latin plural of emeritus.

Aren’t you glad you stopped by?

Reminds me of my favorite Latin joke. Or I should say, only Latin joke.

Julius Caesar walks into a bar and orders a martinus.

The bartender says, “You mean a martini?”

And Caesar says, “If I wanted a double I would have asked for it!”

Speaking of which, 2017 was a year a lot of people ordered doubles. I seriously think we need to take a collective breath and, for a couple of weeks at least, imbibe the true spirit of this season: family, friends, generosity and gratitude.

And just plain old relaxation! So kick back and watch a couple holiday movies (Miracle on 34th Street and the 1951 Christmas Carol are always at the top of my list, though I would remind everyone that Die Hard and Lethal Weapon are Christmas movies, too!)

Don’t stress about things you can’t control (this is the wisdom of the Stoics, and what says holiday fun more than the Stoics?) As Epictetus (b. 50, d. 135) so succinctly put it, “There is only one way to happiness, and that is to cease worrying about things which are beyond the power of our will.”

Changes in technology, Amazon algorithms, the size of advances … these are beyond the power of our will. Ditto the shrinking of slots in traditional publishing catalogues, the number of bookstores that are still open, and bestseller lists (unless, of course, one takes the nefarious road of buying one’s way onto the NYT list, in which case the power of will has been corrupted by the siren song of list-lust. Don’t go there).

Nor can we stuff a stopper in the flood of system gamers, sock puppets, nasty reviewers, and inveterate haters—except to the extent that we adamantly refuse to become one of them.

What is within our power?

Our writing, of course. Our dedication to it. Our determination. Our discipline.

The page we’re working on.

The goals we set and the plans we make.

Concentrate on those things. Chill about the rest.

This is still the greatest time on earth to be a writer. Remember, just ten short years ago there was only one way to get published and into bookstores. The walls of the Forbidden City were formidable indeed.

Then came the Kindle, just in time for Christmas 2007, and suddenly there was another way to get published and into the largest bookstore in the world (with your cover facing out, no less!)

During those heady first years of digital disruption, a few pioneering scribes jumped in and showed massive ebook sales at the 99¢ price point. This got the attention of writers inside (and formerly inside) the Forbidden City, and ushered in a “gold-rush” phase when good and productive writers began to make really serious money going directly to Amazon.

At the same time, traditional publishing began to stagger around like a boxer who gets clocked just before the bell rings to end the round. Many predicted that by 2013 or ’14, the whole traditional industry would be kissing canvas.

Instead, we have entered a new equilibrium where the wild highs in the indie world are leveling off, and the disruptive lows in the traditional world are bottoming out (as one trad insider put it to me, “Flat is the new up.”)

But change, albeit more slowly, continues. Thus, what both of these worlds demand are a new set of business practices. I’ve tried to provide these for the indie writer. I’m not sure who the Bigs are listening to, but I suspect they need more Sun Tzu than Peter Drucker these days.

However, here is one bottom-line truth that applies across the board and will always be apt: What wins out in the end, and perhaps the only thing that does, is quality plus time, which I define as steady fiction production providing a swath of readers with satisfying emotional experiences. This holds true for any genre. You can figure out and strive to do the things that create reader satisfaction.

And what are those things? They are matters of craft. The more you are conversant with the tools and techniques of fiction, the better your quality control. It’s like that inspirational quote from a college basketball player some years ago. During an interview he said, “I can go to my left or to my right. I’m completely amphibious.” 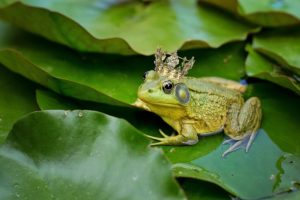 Writer, you have to be amphibious to make it in the swirling ocean and on the rocky shores of the book world today. So my end-of-the-year suggestion is this: Invest in your writing self. Spend a certain amount of money on writing-related improvement, like books and workshops. Go to a good conference and network with other writers. If you’re starting to realize a little income from your writing, set aside a portion of it for this type of ongoing investment.

And do take advantage of one of the best free writing resources around—Kill Zone! Traipse through our library and archives. Subscribe to our feed so you don’t miss a day. Leave comments! We love the writing conversation.

We’re on this journey together, so keep in mind something the great Stoic philosopher Yogi Berra once said: “When you come to a fork in the road, take it.”

Blessings on you this holiday season, from all of us at TKZ to all of you.

44 thoughts on “Writers Need to be Amphibious”