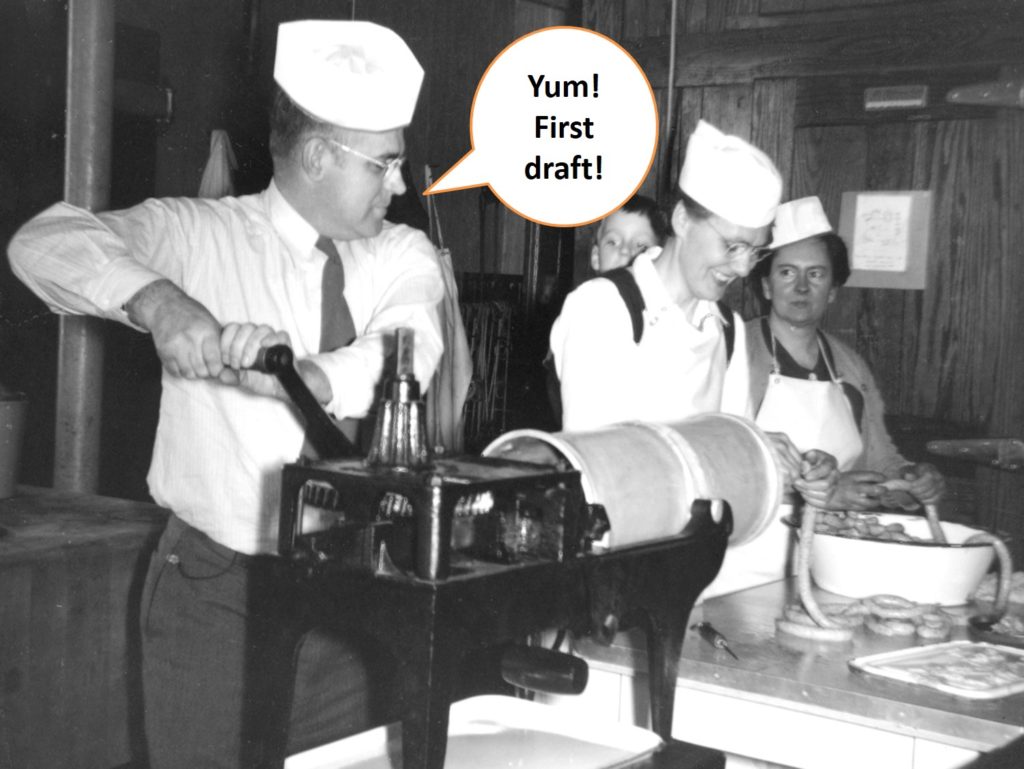 “I have rewritten — often several times — every word I have ever published. My pencils outlast their erasers.” –Vladimir Nabokov.

I’m in rewrite hell this week. Actually, it’s not hell. To me, at least. I love this phase of the process because the really hard work is done — the laying of the foundation, the erecting of the beams, the finishing of the roof.  Now I just have to go back in and make sure the structure is sturdy, the flow from room to room logical, and the style true to my own. Oh, and it would be great if someone gets so emotionally caught up that they maybe want to buy it.

Rewriting is where the book is truly made. No one will ever convince me otherwise. Yeah, my sister and I can turn out a pretty decent first draft, but who wants pretty decent these days? What reader would settle for it? What writer would? So I’m digging back into the coffee-stained third draft this week to up the ante as far as I can.

Now maybe you’re one of those rare birds who can produce a perfect book in a single swoop. (Like Lee Child who told one interviewer: “I don’t want to improve it. When I’ve written something, that is the way it has to stay.”). But most of us need to go back and reassess and rearrange. I always tell my workshop folks that the first draft is written with the heart, but the second, third…tenth, well, that’s written with the head.

Two quick tips: Wait as long as you can stand after you finish your first draft to start rewrites. You need a break from the beast that has consumed your life for eight months or eight years. Also, I always print out a manuscript for rewriting because the eye, so attuned to the screen, becomes inured to error and excess.  Seeing your work in a physical state also gives it a gravitas that the computer can’t imitate. Here’s my big baby in three messy piles: 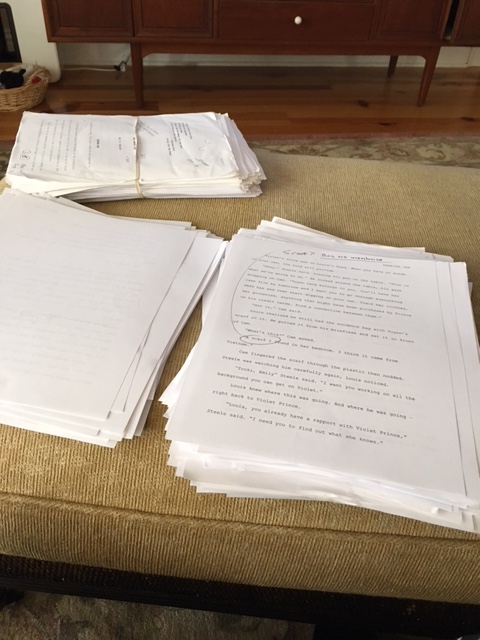 Now what I’d like to do is show you my draft’s innards. But before I drag out my sausage machine, let’s do a quick review of rewrite basics:

This is a big issue, so be prepared to spend a lot of time and brain-power on it. You’re going to find plot holes to plug, characters to amplify, a muddy middle to amp up, conflicts to bring into higher relief. Oh yeah….and you might uncover that elusive theme.  Ask yourself all the basic questions that our bloggers here post about: Is your three-act structure sound? Do your characters want something and is it important enough to drive their arcs? Is your central conflict tantalizing enough to support a whole novel? What, at its heart, is your book about? (not plot, but theme.).

Does your plot make sense and it is believable? (Those are two different things). Do you resort to a deus ex machina or the Long Lost Uncle From Australia villain reveal? Do your characters act in accordance with their natures or do you have them doing stupid illogical things? Are your police and forensics procedures sound or did you try to fake it? (ie clip and magazine are not the same). Does your research hold up? Is your fantasy, horror or alien world well-rendered and credible?

Can the reader easily figure out what’s going on? This does not mean artful misdirection or red herrings. This means you choreograph movement and events carefully, everything from small stuff like moving people across a room or a country to big things like why did they did a certain thing (motivation).  Do you make it clear where we are and what time period we’re in? Can the reader discern a mood or tone in your book (dark? hardboiled? humorous? sardonic?)

Have you ferreted out all the junk-writing? This includes overwrought and repetitious description, dumb physical moves (“He bent his left arm and brought the beer up to his lips.”…no, he took a drink.)  Do you rely on adverbs instead of muscular dialogue? Have you pruned away all the unnecessary words you can, especially as you near the last third of the story when the reader wants to move faster?

Spelling, grammar, punctuation…know them or hire an editor who does. Watch out for dumb inconsistencies like changing a character’s eye color or name spelling. Double check for errors (use Google maps to verify that it is, indeed, a four-hour drive from Moose Butt to Manitou).  Did you get rid of all your brain farts? I once read a novel that described the crime as as grizzly murder. Shoot, in one of my first drafts, I had a distraught character balling like a girl…thank God for editors.

Okay, now let’s look at some of my mistakes and I’ll show you how I hope to run ’em back through the sausage-making machine: 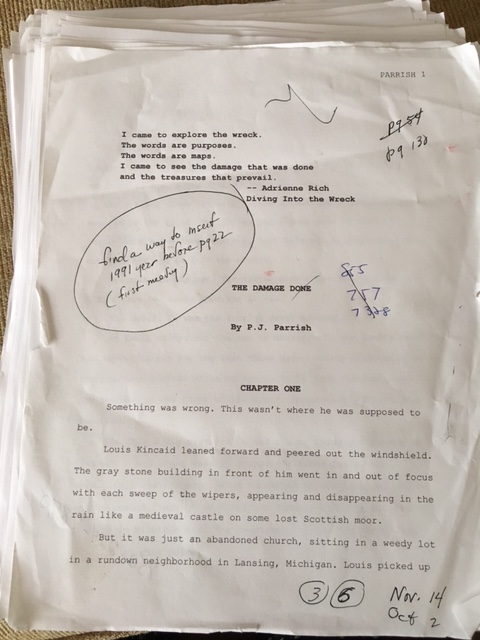 Here we are on page 1 and already I have a problem. In my first chapter (indeed, the whole book) I neglected to tell the reader what year we’re in. My series started in year 1981 and has progressed now to 1991.  I have to make sure my readers know this early because the forensics, cell phones, computers are all going to be different. But notice that I DID find a way to tell readers we are in Lansing Michigan. 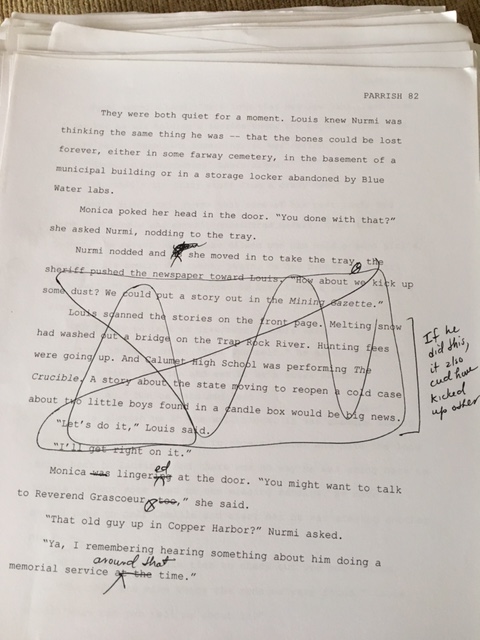 I have a logic/plot problem here. In the deleted part, the sheriff offers to plant a story about Louis’s case in the local paper, hoping to stir up leads. But if he does this, it will tip off a suspect who I have come forward fifteen chapters later — and it blows up the plot! This sounded good when I wrote it on pg 82 but it doesn’t hold up on page 345. 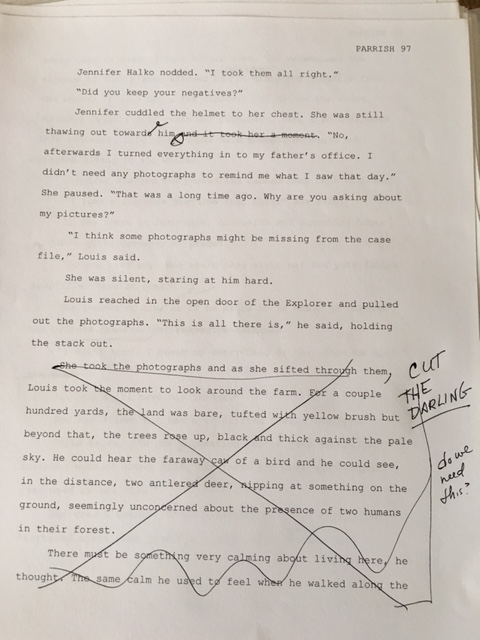 This one falls under Elmore Leonard’s Kill Your Darlings.  Louis is about to uncover a major gruesome clue and plot point on next page. (Yay! Momentum!) Why in the world do I need him looking around this farm at deer or listening to crows? (Boo! Screeching halt!) It was a pretty image when I wrote it but adds nothing, especially since I had already described the lonely isolation of the place in vivid detail two pages ago. 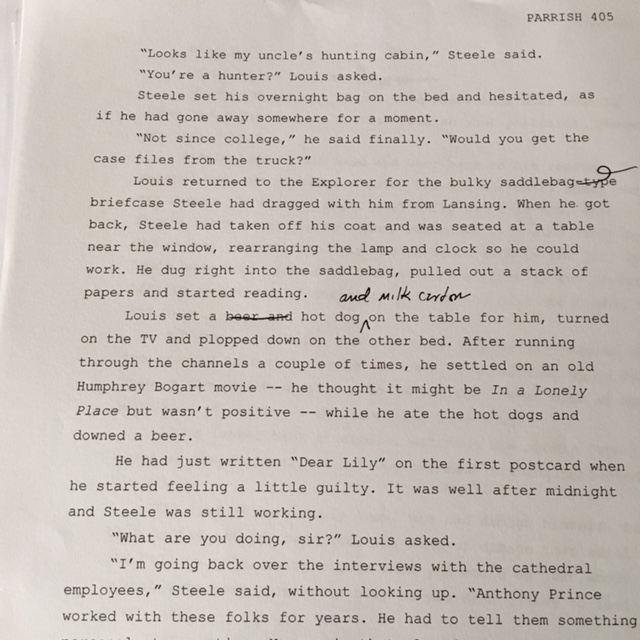 Nice clean page, right? Except for one bone-headed mistake. One of my main characters is a teetotaler. It’s a big point in his make-up, which my hero Louis knows. So why does Louis set a beer at the man’s side? Always watch for dumb mistakes and inconsistencies. In film, a script supervisor oversees the continuity of a movie including wardrobe, props, set dressing, hair, makeup and the actions of the actors during a scene. You don’t have one of these backing you up. So be careful. 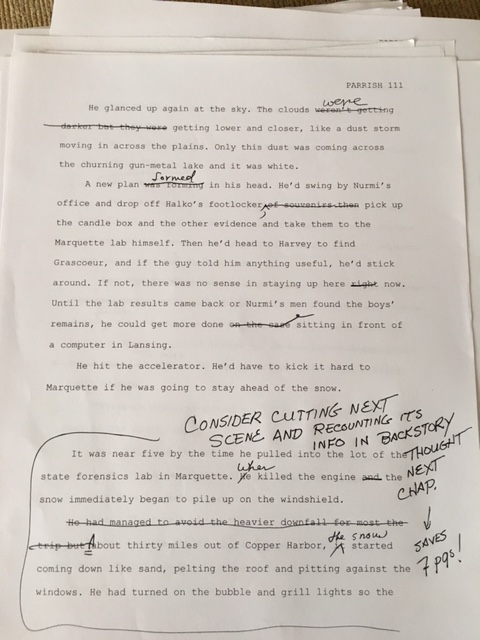 I call this one the Jacqueline Susann problem. The copy after the double space is the beginning of a seven-page scene where Louis goes to a state forensics lab to log in his evidence. It’s interesting in so much as it shows nerdy police procedure. But my book is running long so I have to MAKE DECISIONS about what to put “on camera” and what to recount in narrative. Now some scenes must be on camera (decisive action, great clue reveals) but some stuff can be dealt with efficiently in a character’s thoughts after the fact.  I am going to cut this scene and in the following chapter just say “Louis went to the lab in Marquette and logged in the evidence.”  Back to Jackie Susann: When she turned in one of her potboilers, she devoted an entire chapter to a Democratic National Convention (she had gone to one and was going to show off her research, damn it!). Her wise editor Michael Korda told her to cut it.  She fought him but in the end the book said: “The convention was held.” 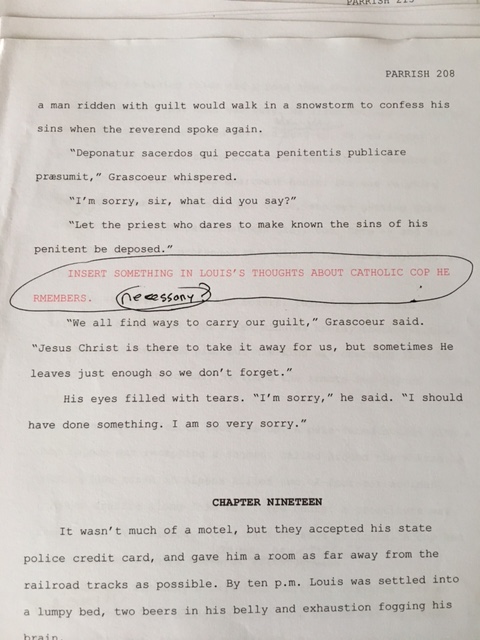 See the part in red? During first draft, I was trying to hone the theme (forgiving those who hurt you as a child) so I was acutely aware of all religious references I used. In this scene, Louis has interviewed an ex-priest who took confession from a murderer decades ago. The priest talks about the sanctity of the confessional but how his guilt eventually drove him from the Church. Catholic cops grapple hard with this issue. But after a powerful scene with the priest, do I really need Louis thinking about this? No, it was one theme-bridge too far.  Lesson: Have a theme but don’t preach. 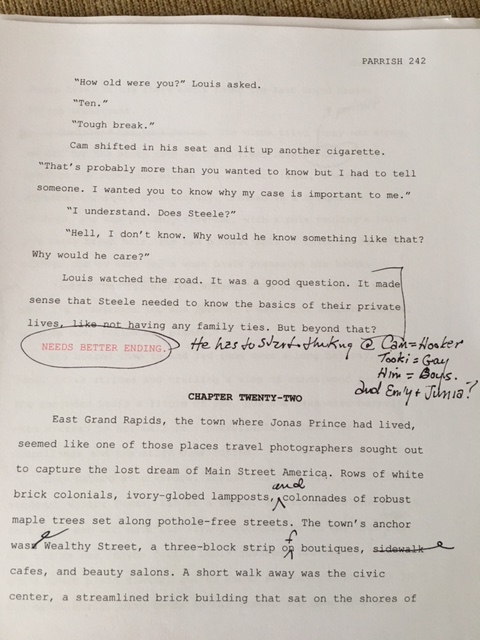 I am a perfectionist. It is hard for me to move on until I get a paragraph, a scene, a chapter right. I am trying hard to change this flaw. My sister flogs me constantly: JUST WRITE! So now I put notes to myself in red to fix it later. This is called faith. {{sigh}} Read the ending of this scene. It sucks, right? I know that. I will fix it. Lesson: Don’t get paralyzed by perfection. Move forward. Chances are excellent that by the time you finish the first draft you will know exactly how to make an early chapter end — or begin — with more punch and precision. 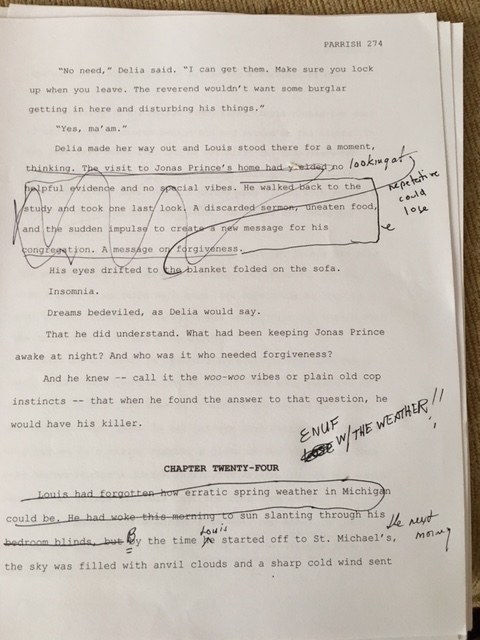 Look at the beginning of chapter 24.  Argh! I opened it with weather. Now, that is okay except that it is April in Michigan and it is raining almost every day in my book. By page 274, the reader GETS that because I have told them at least four times. Lesson: Go easy on weather and don’t repeat the obvious. 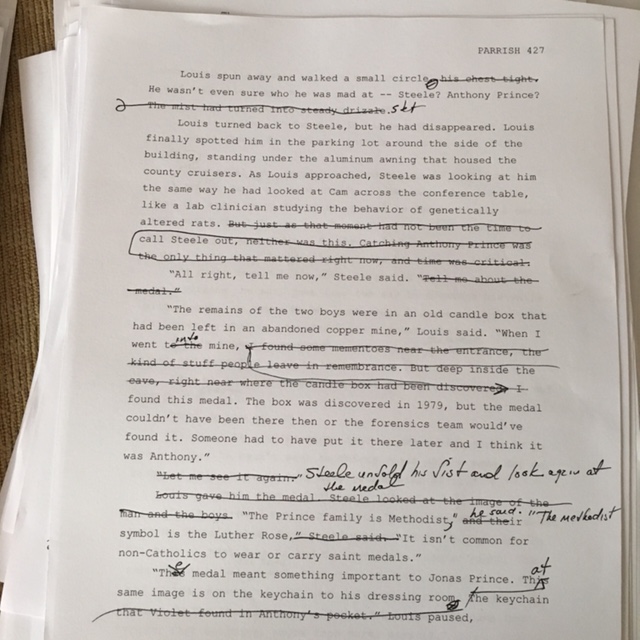 I included this page just to make the point about flabby writing. All the stuff I crossed out is fat. Always aim for economy, which is not the same as underwriting (a sin in its own right). When you are just moving characters around in time and space, do it with as few and unflashy words as possible.  Almost half the pages in my manuscript are marked up like this. 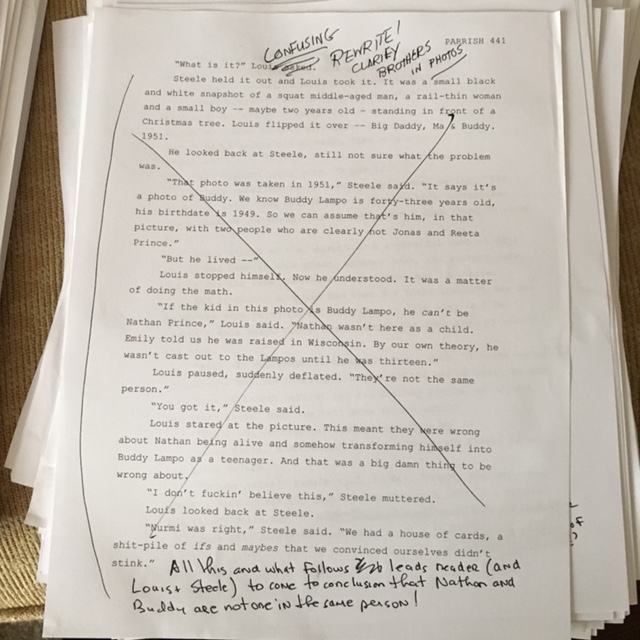 I saved the most important one for last. The sin isn’t apparent to you but boy, did it jump off the page when I read it in rewrites. We laid down a very complicated bread-crumb trail of clues in this book about mistaken identities, time-lines, family trees. So it was critical that as the book neared its climax, we explained this so the reader would understand how the puzzle finally fit together.  Well, we didn’t do a good job of ‘splainin. As a major clue, we had two photographs of boys that we thought was a peachy misdirection but it only confused the reader in the end. It came on page 441 and was a major plot mistake that we had to acknowledge and correct. It was major surgery but without it, the book would have died. Lesson 1: Don’t avoid the hardest work. Lesson 2: Don’t confuse the reader. Especially at the end, after they have invested so much time and heart into your story.  Make the ending clear, satisfying and logical.  Your plot twists must be well-earned.

That’s it, crime dogs. Now if you’ll excuse me, I have work to do.

33 thoughts on “Cutting Open the Sausage:
A Hard Look at Rewriting”