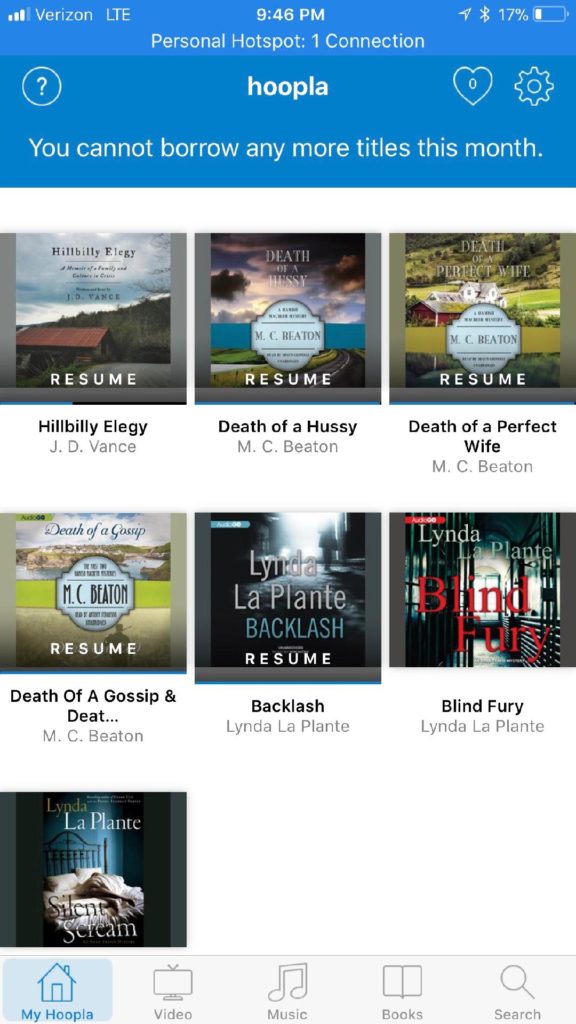 “You cannot borrow any more titles this month” has become the saddest phrase of my small existence.

I may be an audiobook addict.

My gateway drug was the bargain-bin cd novel. Years ago I discovered many in odd places like Tuesday Morning stores, Big Lots, and very occasionally at Barnes and Noble. It took a lot of digging to find unabridged versions–I will not read or listen to abridged versions of books because they incite moral outrage in me. WHY are there such things? I can see perhaps that once upon a time people read Reader’s Digest abridged versions of classics so they could boast they’d read them with some measure of authority, or in case someone might burst into their house and made them take a pop quiz on Great Expectations or Anna Karenina. But, really, if that happens, you’ve got worse problems than being a slacker reader.

After CDs I moved on to iTunes books. I logged on frequently to look for specials, and rarely paid more than $5.99. They were much more portable than bulky CDs. But I got greedy and started buying pricey bestsellers and had to cut myself off. My husband subscribes to Audible. Several of my own books are available on there, but I bristle under the program: limits and specials and points. Mostly, I don’t like to belong to clubs that will have me–especially if I have to pay.

For a while, I listened exclusively to free podcast books. One of my favorite sites is the Classic Tales Podcast with B.J. Harrison. I believe all of the audiobooks he reads are in the public domain, making them truly classic. You can subscribe and get the free podcast, but he also has a great library of inexpensive classics.

I know the rest of the world began streaming library books years ago, but I only started last winter, when I re-joined a nearby library (we are in an unincorporated area) for $80. Now HOOPLA is my new best friend. I have yet to figure out the metrics for which books are available on HOOPLA and which aren’t. The pickings are occasionally spotty. For example, nearly all of  M.C. Beaton’s backlist Agatha Raisin books are available, but there are few books by Robert Stone. If anyone knows how the selections work, please do enlighten us…

As you can see from the photo above, my audiobook listening is fairly light. I’ve been bingeing on traditional and procedural mysteries. (Ignore the “resume” on the two Beaton books–I suspect I moved on to the next one before the last few seconds played.) HILLBILLY ELEGY has been a kind of in-between book. The first 90 minutes or so made me uncomfortable because 1) I found Vance’s broad statements about history and class attributes random and defensive, 2) he pronounces “Appalachia” with a long, Midwestern 3rd “A”, and it drives me nuts as someone who lived for years in WV and western VA, and 3) I have deep, recent roots in eastern Kentucky, and it felt achingly personal and aggravating at the same time–which is to be expected, of course, because my hillbilly ancestry makes me ornery and skeptical anyway. But somewhere around the 90 minute mark, Vance gets deep into his personal history and it becomes a compelling story.

I nearly always have an audiobook on in the car, whether I’m going on a long trip or to the post office. I have one on while I cook or garden or clean. In fact, I’ve been known to engineer solo driving errands just so I can listen to a book in peace.

Sometimes I wonder if listening to a book isn’t cheating. Is listening to a book too passive an act to be considered useful to a writer? I’m torn. It occasionally feels like that. I’ve let the first 4 Hamish MacBeth books pour into my ears like mineral oil used to float a bug out. (That’s a thing.) I started my heavy listening of traditional mysteries last spring, in preparation for writing my first cozy novel, and now can’t stop. Thank goodness there are a ridiculous number of mysteries out there. Unfortunately I’ve listened to so many that I’ve found there are some books that are marvelous in audio, but are barely readable on the page. (Not telling. Let’s just say I never tried paper with that author again.) It’s as though my listening brain is so focused on the story that it can ignore the weak writing–something I seriously have a hard time doing when I’m looking at a page.

Although magazine and Buzzfeed-type quiz testing tells me that I’m an equally visual and audio learner, I retain stories I hear in much more detail than I do when I read words on a page. Yet the story plays out in my head in much the same way for both–I get to visualize the characters, I get to make educated guesses, I get to participate in ways I don’t when watching a film.

And yet. One of the reasons I still read more paper books than I do ebooks is that I am better able to create a mental map of both the book and the story when I can actually touch and turn pages. It feels participatory in a way that swiping never does. Ebook pages are too uniform. They aren’t alive. Now, that’s just my mental eccentricity–I do read and publish ebooks. It’s just that the experience is different. Stories have a shape, and I like to feel the shape so I can create story shapes for myself. If that all sounds a little Montessori Method to you, sorry. It’s the only way I can think to describe it.

I do, to some extent, also see the shape of stories when I listen to them.

I know. This is starting to sound a little too theoretical. A little too woo-woo. But I can’t shake the feeling that I’m betraying my writer self if I’m not reading words on a page. There are times when I realize I’ve been thinking about something else for a minute or two and have to click back to hear what I’ve missed. That’s not to say there haven’t been many times that’s happened as I looked at a paper book.

What say you, dear Zoners? Am I splitting hairs? As writers, do you think there’s a best way to experience a story?

39 thoughts on “Audiobooks: Is Listening the Same as Reading?”