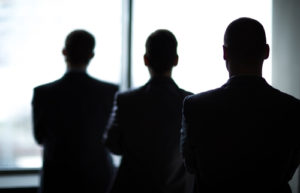 Today we are reviewing (anonymously) a first page of a manuscript written by another brave volunteer. I’ll add my thoughts at the end. Then, please share your reactions in the Comments.

Neil Henberlin rushed through the glass entrance doors of his company’s 20th floor corporate office, pushing them a little harder than necessary. The etched-glass door slapped his shoulder as it rebounded off the rubber door stop. The gong sound of the glass vibrations caused the receptionist’s head to pop up, lips pursed, eyes squinting. She looked at him as if she’d seen a ghost.

“Someone’s in my parking spot,” he said, as he leaned over the desk to look in his message slot. “No messages?”

The receptionist shook her head and said, “Ah… we weren’t expecting you.”

“I know, it’s Stampede Week. My hat and boots are in my office. I’ll change later.”

Henberlin noticed the receptionist’s white Stetson cowboy hat, denim skirt with a white fringe, and the red bull-rider boots. He nodded in approval, then turned in a hurry for the stairway and took off almost running. Taking the steps two at a time, he topped the stairs and walked past the corner office occupied by the Vice President of Sales. He hoped to get past without noticed. The VP’s secretary, wearing a straw cowboy hat, Western-cut blouse, jeans, and cowboy boots, happened to be exiting the office. She closed the door and turned to see Henberlin. Stopping dead in her tracks she said, “Neil?”

But, too late—Henberlin raced by. He continued at a quick pace until he turned the corner and carried on to his office. Rushing in, he placed his PC carrier on a chair and turned, intending to hurry away, except the top of his desk caught his eye. Someone had cleaned and tidied it. No papers, none of his personal items, only the computer cables and the phone. A cardboard box sat on the floor beside the desk. No time now to figure out who had messed with his stuff, he’d promised Emmitt he’d tell stories to the sales training class.

He kept on moving to get to the classroom, knowing he was already late. Once he entered the training lobby, he crossed the small area and knocked on the only door from which he heard voices.

The door opened and Emmitt LeClare’s smiling face emerged. Emmitt, wearing a red and white diamond-checked shirt with double breast pockets, each with white pearl snaps, and a bolo tie, lost his smile the second he realized who stood before him.

The gong sound of the glass vibrations caused the receptionist’s head to pop up, lips pursed, eyes squinting.

Breaking up a long sentence into shorter, punchier ones can add strength to a minor action sequence. For example, one could break up the preceding sentence as follows:

The reverberations of the glass caused the receptionist’s head to pop up. She squinted in my direction, her lips drawn into a straight line. “

Delete or revise the next sentence.

She looked at him as if she’d seen a ghost.

Cliches weaken prose. In this case, I don’t think you need to elaborate this minor character’s reaction.

Neil’s dialogue here directly follows the receptionist’s reaction, possibly creating confusion over who is speaking. Instead of opening the paragraph with Neil’s dialogue, start with an action by him to “refocus” the scene on him, then add his dialogue.

I would also suggest punching up the language and breaking up the flow to add some tension.

“Some asshat’s taken my parking spot.” Neil leaned against  the desk to peer into his message slot. It was empty.

I started getting confused by the sequence flow at this point in the scene. Why does the fact that Neil had  no messages lead them into the revelation that the no one was expecting him? We need a hint of why he was so surprised by the empty messages box. (Question to consider: wouldn’t Neil’s name have been removed from his message box already?)

Edit and rearrange the sequence of some actions and dialogue to strengthen the flow of actions-reactions.

“I know, it’s Stampede Week,” he said, giving her cowgirl getup a nod of approval. “My hat and boots are in my office. I’ll change later.”

Use stronger, fresh language as much as possible.

“Hey Geneva, I know I’m late for the sales training class. But you watch. I’ll  be the Rhinestone Cowboy before noon.”

The descriptions of the characters’ cowboy outfits seemed too lengthy. One or two words is enough to get across an impression. Overlong descriptive lists slows the pace and risks losing the reader’s attention.

Too many similar characters dilute the focus.

Neil has two encounters with similar-sounding receptionists. I suggest cutting the interaction with the second receptionist. Go directly to the encounter with Emmitt LeClare.

Emmitt, wearing a red and white diamond-checked shirt with double breast pockets, each with white pearl snaps, and a bolo tie, lost his smile the second he realized who stood before him.

Neil seems a tad clueless in this scene. Anyone working in today’s corporate environment knows the axe could fall at any moment. I would think he’d react with alarm at the sight of his cleaned-out office?

The writing here is solid and shows promise, but I think we need to get more of a hint about the type of conflict that will take place in this story. I think a stronger title would help–Undertow of Loyalty didn’t convey a sense of  what type of suspense readers can expect from this story.

I want to thank today’s writer for submitting this first page!

What are your thoughts and suggestions for the writer of today’s page? Please share your feedback in the Comments.