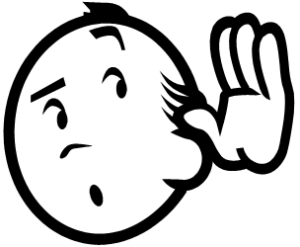 You know how sometimes you get home from a social gathering and think of the perfect line you didn’t say?

It’s like that episode of Seinfeld where George is in a meeting and is gorging on the shrimp tray. Another guy says, “Hey George, the ocean called. They’re running out of shrimp.” Everyone laughs at George, who has no comeback.

So he spends the whole episode trying to come up with the perfect rejoinder, and to set up another meeting with the same guy. The line George settles on is, “Oh yeah? Well, the jerk store called. They’re running out of you.”

This line fails to impress Jerry, Elaine, or Kramer. But George insists that’s the one!

Near the end he has his meeting, and has brought the shrimp himself. He stuffs his face until his rival once again says, “Hey George, the ocean called. They’re running out of shrimp.”

With a smug smile, George stands and says, “Oh yeah? Well the jerk store called. They’re running out of you.”

But then his adversary immediately comes back at him: “What’s the difference? You’re their all-time bestseller!” And once again, everyone laughs at George (which is really sort of the premise of the show, right?)

I thought about poor George the other day as I was considering how to take advantage of unbidden suggestions from our deep writer’s mind, as poised against “the best laid plans…” It’s a matter of three things, I think: awareness, craft and risk.

The best impromptu line I ever delivered came at one of the Men of Mystery gatherings. This is an annual event in SoCal which brings in fans of mysteries to listen to fifty authors pitch their books for one minute each—and then enjoy a nice lunch and a keynote.

This particular year the ballroom was packed.

As the microphone made its way down my row, the author two tables away spoke about his noir series and how it takes place in the “seamy underbelly of the city.”

The next author was a fine fellow named Mike Befeler, a senior citizen writer of what he calls “Geezer lit.” These are mysteries set in places like retirement homes. Mike made his amusing pitch.

Then the mic came to me. And I said, “Mike, I have one question. In your genre does seamy underbelly have a different connotation?”

The laughter was explosive. It’s probably my favorite moment as a public speaker. Everything just fell together. First, the conditions, of which I was acutely aware, because I was actually listening. Next, the craft of the English sentence, forming one for the best effect. Finally, taking a risk, for how many times have we heard a comedian tell a joke and get crickets in return?

Fortunately, it all worked out. It will in your writing, too, if you learn to listen to the book, respond to it with craft, and risk some writing time. Yes, it could turn out to actually be the wrong move. But sometimes you have to write to find out.

This applies whether you are a planner, a pantser or some sort of breed in between. When you’re into the actual writing, the book should start to take on life. It should whisper to you on occasion, and sometimes maybe make some demands.

It might be a character who talks back to you. I wrote a novel once with a fairly detailed outline. It was about a lawyer being stalked by an old enemy, putting both him and his wife in danger. I had planned to have the wife get out of town for awhile and stay with a relative.

But when I got to that scene, the wife refused to leave. I tried to get her out the door, but every move I attempted felt false. I finally had to accept the fact that the character was right.

Which meant, of course, adjusting my plans. As I recall, it took me a couple of hours to move around the pieces and account for the ripple effects. I made use of my novel journal. This is a free-form document where I “talk” to myself about the book. I usually do most of this in the pre-planning stages, getting to know the story and characters, setting down plot ideas and delving deeper into why I am drawn to this story.

But the novel journal is an extremely valuable tool during the writing itself. (For Scrivener users, the “Project Notes” pane is a great way to do it.)

Now, you pure pantsers are always doing a lot of listening. Your challenge is to know which voices to heed! Often you don’t find this out without a lot of wandering around in the woods, falling into bogs, retracing your steps and realizing that wasn’t such a good voice after all.

Plotters, on the other hand, often resist listening at all because their outline is a finely-honed edifice they are loathe to mess with.

In either case, the more craft you know, the better moves you will make. For example, if you’re aware of what needs to happen structurally, at the very least you’ll save yourself a lot of time and frustration. As I mentioned in a comment to Joe H. yesterday, it’s good to have a map of the signposts.

And then, finally, it comes down to risk. There should always be some risks in your writing, or you’re not pushing yourself far enough along. And you know what else? Taking risks is one of the great joys of writing, no matter how it turns out.

I experienced that just a few weeks ago. I was rolling along in the first act of my WIP. I had a map of my signpost scenes, and knew the “mirror moment.” Then suddenly, out of the blue, and I mean way out of the blue, one of my characters said something that was so shocking, so upside-down turning, that I literally sat back in my chair and stared at the screen.

I hadn’t planned it, I never anticipated it. This one line would completely change the trajectory of the novel. I had to think about it, and you know what I decided? It’s one of the best doggone twists I’ve ever come up with (or should I say my book came up with it and fed it to me?) So I’m keeping it, man. I went into my novel journal and started justifying the change and creating a whole new backstory.

In my humble writer’s opinion, it is much better than what I started out with—because I listened to the book, am trusting my craft, and am taking the risk.

You will, too … if you listen.

Do you ever hear your books talking to you? How often do your characters wander off your chosen path? How does your craft serve you in those times?

23 thoughts on “Listening to Your Book”