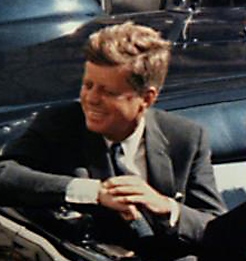 November 22, 2013, marked the 50th anniversary of one of my great research obsessions—the assassination of John F. Kennedy. Last name notwithstanding, I am of Irish Catholic heritage, and in my house growing up, the Pope and President Kennedy were held in equal esteem. When the news came that the president had been killed, my mother was devastated. I was six at the time, and while I couldn’t fully comprehend the enormity of the crime, I knew that Mom was upset and I found her grief unnerving.

In the years that followed, Mom became quite the conspiracy theorist. She consumed all the books by Garrison and the others, and by extension, I likewise became a conspiracy theorist. By the time I was a senior in high school, I knew that there were at least two gunmen and as many as three. I steeped my geeky self in the research, even as I was penning stories on the side. (Look up “babe magnet” in the dictionary. My high school picture is there, labeled, “Not Him.”) 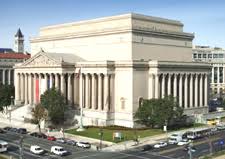 Once I got my acceptance letter to the College of William and Mary in Virginia, and I realized that freshmen had to write a major research project in their first semester, I knew that JFK’s murder would be my topic. Living in the suburbs of Washington, DC, and working a night job in telephone sales, I was in a perfect position to do primary research at the National Archives downtown. In the morning, I would take the bus to Constitution Avenue, and then I would head inside the massive Archives building to the reading room.

This was 1975. The Zapruder Film had still not been seen by anyone outside of official Washington, and the House Select Committee had not yet convened to re-examine the Warren Commission evidence. This was all new territory for me, and I hoped to forge new territory for my future professors.

Here’s how it worked: I would fill out a sheet of paper for what I wanted to look at, whether Warren Commission documents or FBI interviews, or re-enactment photographs, and then I would hand the sheet to a pretty young clerk-lady, and then she would bring my requests to me. It was table service, and as an 18-year-old with braces on my teeth, this was pretty heady stuff. They even called me Mr. Gilstrap. Very, very classy.

After four or five days of taking up space and making copious notes (no photos allowed, and certainly no copiers), I was sitting at my spot at a study table when the cart full of stuff I ordered arrived not with a pretty clerk at the helm, but rather it was pushed by an old guy.

“You’ve been the source of a lot of curiosity here,” he said. He then went on to introduce himself as Marion Johnson, the curator of the JFK exhibit at the National Archives. He observed that they didn’t often see someone my age being such a dedicated researcher.

I explained to him about the paper I had to write, and about my family’s obsession with all things assassination-related. He seemed interested, and then he said, “Come with me. I think I have some items that you might be interested in.”

I followed him into the bowels of the old building, into a large locked storage room that was under-lit, and stacked floor to ceiling with boxes and file cabinets. “This is all of it,” Mr. Johnson explained. “This is our John F. Kennedy exhibit.”

I don’t remember the place itself well enough to give dimensions, and at the time, I didn’t have a frame of reference, but the room housed a lot of stuff. When he unlocked an area within the storage room that was set off from the rest by a chain link barrier, I knew I was in for something special. Mr. Johnson pulled a wooden case off of a shelf and placed it on a clear spot in an otherwise cluttered table. He donned a pair of cotton gloves and handed me another pair. When the snaps on the box opened and he lifted the cover of the box, I realized right away that I was looking at a Mannlicher-Carcano 6.5 millimeter rifle bearing the serial number C-2766. 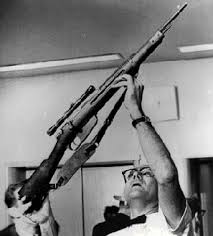 That was Oswald’s rifle.

That was plenty. At age 18, I got to hold the rifle that killed John F. Kennedy.

I noticed the .38 caliber pistol that was also in the box. “Is that the gun that killed Tippitt?” I asked. J.D. Tippitt was a Dallas police officer who Oswald shot to death shortly after the assassination. 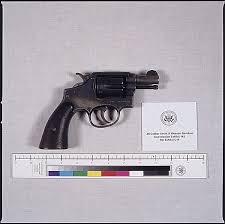 From there, Mr. Johnson led me to a smaller room—a double room, really, with a few chairs on my side, and then a second room I was not allowed to enter that was separated from mine by a glass panel. It reminded me of the perp interview room in every cop show.

“Have a seat,” Mr. Johnson said. “You’re going to see something that very few others have seen.”

Within a minute, it became clear that the room on the other side of the glass was a projection booth. The lights dimmed, and then the screen on the far end came to life with the Zapruder film. Now that those few seconds documenting the fatal shots are so ubiquitous, it’s difficult to explain how thrilling—how heart-stoppingly shocking—it was to watch the events unfold in that little room. There’s no sound on the film, and there was no sound in the room—not even the clacking of the 8mm projector, thanks to the glass—as the motorcade swung the turn from Houston Street onto Elm, and then disappeared behind the traffic sign, where a still-unknown stranger opened his umbrella.

When the president’s limousine emerged from behind the sign, I watched his hands rise to his throat, just as they had in the countless stills I had seen of that moment. Jackie looked over, concerned, and then the top of the president’s head vaporized. Having by then seen stills of Frame 313 of the Zapruder film, I knew about the eruption of brain and bone, but those stills did not prepare me for the violence of it in real time.

I had held the gun that inflicted that wound.

I left the Archives impressed yet shaken that afternoon, and I was more fully emboldened to do my research the way it was supposed to be done. I stated above that I was a telephone salesman during the evenings, hawking Army Times magazine to people who loved to hang up on salesmen who sounded like they were eighteen years old. I hated that job, but it gave me access to a WATS Line, which was a huge deal back in the day—long distance phone calls to anywhere for very little cost. Extraordinarily little cost to me since I wasn’t paying for the service.

Abusing the largesse of my employer (who subsequently fired me, not that I cared), I was able to find and call the key players from the assassination at their homes, and like the staff at the National Archives, they were each impressed that someone my age would be so dedicated to a research project. Among the people I interviewed for that paper were Admiral J.J. Hume, USN (ret.), who performed JFK’s autopsy, Malcolm Perry, the Emergency Room physician who treated the president when he arrived at Parkland Memorial Hospital, and Cyril Wecht, MD, a forensic pathologist from Pittsburgh, who was a serious critic of the Warren Commission’s processes and conclusions. We’re talking long interviews, here, and not one of them ever lost patience with me—not even Admiral Hume, when I asked him what he thought about the accusations that he had botched the autopsy. His answer to that question, in fact, left an impression on me. He painted a picture of enormous pressure and emotion that I have later come to see as similar to the so-called fog of war. They were, after all, human, and the ravaged body of the president of the United States lay naked on a steel slab. I realized what a horrible moment that must have been for everyone in an official capacity.

By summer’s end in 1975, I had already made good progress on my paper. As I recall, it weighed in at something like thirty pages, and it contained photographs ordered from the National Archives, and the content of the multiple interviews that I had performed. When my mother read the paper, she was less than pleased by my conclusion that Oswald was the lone gunman—a conclusion I stand by today, and which has been reinforced by every bit of reliable new evidence that has since been released.

When I turned the paper in, I had no idea that it would nearly get me thrown out of college before I finished my first semester. My professor, Mr. Greene, as I recall, did not believe that a college freshman would do that level of research, and he called me in my dormitory to tell me that he was reporting me to the Honor Council. It took nearly three hours on the phone to convince him otherwise, defending every quote that I collected on my own, and every conclusion I drew.

24 thoughts on “Lee Harvey Oswald and Me”