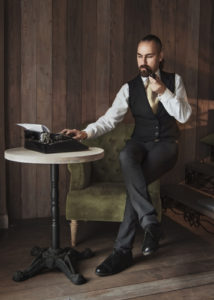 Photo purchased from Shutterstock by KL

A recently published book, Legendary Idols And The Clothes They Wore, by fashion journalist Terry Newman, is replete with stories about famous authors who are known for their trademark fashion styles. Newman argues that there is a close connection between a writer’s wardrobe and his or her writing persona.

Sylvia Plath, on the other hand, used her wardrobe choices as protective camouflage.

“(Plath) wore precise, neat and prettily prim 1950s twinsets and print dresses that worked as a shield for her psyche,” writes Newman in her book.

Joyce Carol Oates “predated geek chic by decades” in the 80’s by wearing oversized, wiry glasses, Newman writes. Nowadays the glasses are scaled down somewhat, but they remain an important element in the author’s quirky-but-cool style. As an emerging author in the mid-80’s Brett Easton Ellis wore suits and favored “low end Hugo Boss” for nights on the town.

Question for our writer/readers: do you have a signature sartorial style? Does your personal style reflect or resonate with the characters you write?

22 thoughts on “Does The Wardrobe Make The Writer?”