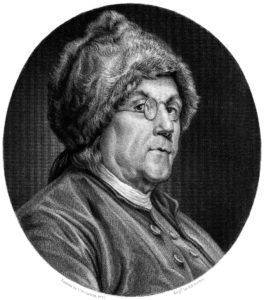 For those who advocate the free-form, no-study school of fiction writing, let me call from the grave an expert witness for the other side, one Benjamin Franklin. No slouch as a writer himself, Franklin was also a lifelong student of the art of living well.

Most people have naturally some virtues, but none have naturally all the virtues. To acquire those that are wanting, and secure what we acquire, as well as those we have naturally, is the subject of an art. It is as properly an art as painting, navigation, or architecture. If a man would become a painter, navigator, or architect, it is not enough that he is advised to be one, that he is convinced by the arguments of his adviser, that it would be for his advantage to be one, and that he resolves to be one, but he must also be taught the principles of the art, be shewn all the methods of working, and how to acquire the habits of using properly all the instruments; and thus regularly and gradually he arrives, by practice, at some perfection in the art.

In Franklin’s autobiography, he sets out his method of moral improvement. He settled on thirteen virtues he wanted in his life: Temperance, Silence, Order, Resolution, Frugality, Industry, Sincerity, Justice, Moderation, Cleanliness, Tranquility, Chastity and Humility.

Next, Franklin printed up grids with the virtues in the left column, and rows of seven boxes, representing a week. He determined to concentrate on one virtue per week, and leave the other virtues to their “ordinary chance.” In the evening, he would look at the day’s page and assess how he did in the main virtue, while making a mark in those areas where he sensed he needed improvement. Here is what a page on Temperance looked like: 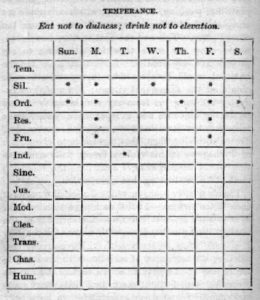 In this fashion, Franklin could go through all thirteen virtues four times a year. Business and sales folk have been using Franklin’s system for decades to improve their own performance. Not via Franklin’s virtues, but by determining their own areas of competence. These are called critical success factors (CSFs).

If you were to set up a self-study program, concentrating on one CSF for seven weeks, in one year you will have covered them all––with three weeks to spare!

Improving just one of the CSFs is going to kick your fiction up a notch. But what if you improved on all seven?

What if your goal was to get 10% better in each? (I know there’s no way to measure that, but you will be able to feel it. So will your readers). If you did that, your writing would improve not just a notch, but exponentially.

If this concept is new to you, let me suggest that you start by regularly investing in craft books.

For plot and structure, modesty prevents me from recommending certain books, like Plot & Structure and Write Your Novel From the Middle. Collegiality, however, would have me alert you to Story Engineering by TKZ’s own Larry Brooks.

My favorite book on characters is Dynamic Characters by Nancy Kress.

The best book on dialogue is How to Write Dazzling Dialogue. Modesty prevents me from naming the author.

Meaning or Theme: Writing a Book That Makes a Difference by Philip Gerard.

There are, of course, many other texts you can add to the list. I love books on writing. I still read them. And Writer’s Digest. My philosophy is if I learn just one new thing (or a slightly different take on something I already know) that makes my writing better, it’s worth it.

We also have a stunningly good archive on the craft here at TKZ, too.

And if you feel like making in-depth investment in instruction on all of the above, I can sheepishly recommend the video course Writing a Novel They Can’t Put Down.

Now, add to all that some of your favorite novels and authors who do these CSFs well. For example, when I want a refresher on dialogue, I might turn to Elmore Leonard or Robert B. Parker. For an action scene, I can whip out any of the Jonathan Grave thrillers by a fellow named Gilstrap. For voice, give me some Raymond Chandler or Ray Bradbury. Theme? To Kill a Mockingbird or The Catcher in the Rye. Scenes that end so you have to turn the page? Early Stephen King.

Make your own list. Read those books again, or for the first time, taking notes on what the author does well. In my bookshelf in the garage (moved there so I could have more room for books in my house) is a big collection of paperbacks I devoured in the early 90s as I was learning the craft. They are filled with my pencil underlines and marginal notes:

You still have pencils, don’t you? Use them!

And don’t forget movies. I use film a lot when I teach because some of the most important CSFs are complementary twixt film and literature.

Want to see a perfectly structured movie? You can’t go wrong with The Fugitive. how about a big theme wrapped up in compelling characters? Casablanca. Dialogue? Double Indemnity. All About Eve. Sunset Boulevard. A lesson in tension? Eye in the Sky (a recent favorite). The whole history of movies awaits you.

Finally, do some writing exercises that incorporate what you’re learning. Write practice scenes, experiment with voice, do several pages of nothing but dialogue.

And yes, right alongside your study, be writing your novels. When you write, write. Be loose. Don’t think too much. Be very careful about the demon perfectionism. Write your first drafts as fast as you comfortably can, leaving the CSFs, as Franklin did with the virtues, to their “ordinary chance.”

Then, when you edit, think about and apply what you’ve learned.

Repeat over and over the rest of your life.

Do that, and Ben Franklin, flying his kite somewhere near Alpha Centauri, will look down and smile.

25 thoughts on “Strengthening Your Fiction The Ben Franklin Way”