The writers at TKZ regularly volunteer to critique the first page of a novel. We have a big backlog. Congratulations to the brave writer who submitted this first page critique. My comments follow the work.

This is a story about Timothy Frame, a man who saw the world in decimals and dollar signs. A man who, unable to prescribe himself with any wondrous adventures of his own, was often fond of basking in the adventures he could find inside of his television set, or his relatively new cellphone, which shined just as much now as it did when he first bought it.
This is a story of a man who wore his tie in a single-Windsor knot and could tie it with his eyes closed. A man who could never bring himself to care enough to fork over the seventy-five cents for a local newspaper, but was often bored enough to gaze upon their front pages during his time spent in the queue at his local Starbucks.
This is a story of a man who was proud of the urban-themed wall hangings and area rugs that he had decided, after a long and arduous debate within himself, would define his personality far better than any of the other eclectic, mass-produced items found in that particular section of the Pier One store, located down the street from his one-bedroom apartment.
This is the story of Timothy Frame, who had planned his entire existence, down to the last retirement dollar, and even down to the very slab of stone that would inevitably bear his name and a couple of dates, separated by a single hyphen. Timothy Frame, who had proportioned his life evenly and would measure those proportions accordingly on a day-to-day basis. Timothy Frame, whose teeth had always bled when flossed.
He threw the bloody clump of thread into the wastebasket and carefully placed the box of floss into the wooden drawer beneath his enamel-coated sink. Spitting one final time into the pricey-looking bowl, he thought to himself.
“$99. Money well spent.”
It wasn’t marble, though that didn’t bother him. It looked enough like it to satisfy him. If anyone else were to ever come over, they might fall for the lie at a quick glance.
“This guy owns a marble sink,” they would think. “He’s going places.” 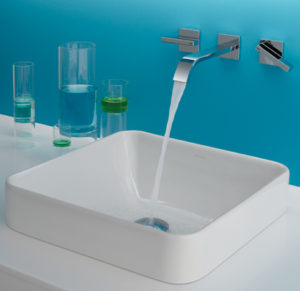 ELAINE’S COMMENTS: You have an interesting essay here. You’ve given us a character sketch. I like your observations, and the careful details. It’s an entertaining exercise, but it’s not the beginning of a novel. I’m assume that’s what you’re writing.
Help us out, please. Your readers haven’t a clue what kind of novel you’re writing: Is it a crime novel? If so, what kind: a thriller? A cozy? A novel of psychological suspense? A hard-boiled mystery? Give us a hint.
Who is Timothy Frame? Is he a victim? A killer? A detective? How old is he?
Nothing happens, except Timothy flosses his teeth. A novel needs action, but there’s nothing to propel this description forward and let the story unfold.
Please let your readers know that something will happen. You can build on that last line:
” ‘This guy owns a marble sink,’ they would think. ‘He’s going places.’ Too bad the only place Timothy was going was prison. For murder.”
Or, “There was one thing Timothy could not plan: that his carefully measured life would be destroyed by . . . .”
Your readers are lost in time and space: Where are we? In a city? A small town? What is the time of day? What time of year?
We’re not even sure enough about Timothy to know his social status. We get hints he’s working his way up. That’s why he’ s so proud of his faux-marble sink. It looks real. But we need to believe he’s real, too.
There is fine writing here, but we writers often fall in love with our own descriptions. Take a hard look at this description and figure out where you want to go. I’d love to see these questions answered and have you turn this into a real novel.

Time for a Caribbean cruise! Win an autographed hardcover, Final Sail, my 11th Dead-End Job mystery. Enjoy Helen Hawthorne’s adventures on a luxury yacht as she tries to catch a jewel smuggler. Click Contests at www.elaineviets.com