I know I promised last post that I would talk about dialogue this week, but I got distracted and had a hard time taming the post.  Next time.

This week, inspired by the classic John Miller piece posted a little while ago about guns and cordite and stuff, I thought I would continue the theme with a post about bullets and their behavior.  Let’s start by recognizing that virtually everything you’ve ever seen on television regarding bullet behavior and the damage they cause is wrong.  No matter how tough a tough guy is, if he’s been shot in the leg and his leg is broken, he cannot walk on it–except maybe if it’s a fibula (ask John Wilkes Booth about that).  Remember all those heroes of our youth who were “only” shot in the shoulder, and then were back in action by the epilogue with his arm in a sling?  Well, here’s what a shoulder joint looks like: 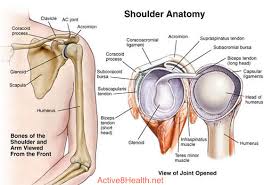 There’s no place for a bullet to go that would not shatter a bone or three.  Not to mention the complex arrangement of blood vessels in there that are just waiting to get torn up.  Torn blood vessels bleed.  If the bleeding can’t be stopped, the victim dies.  Blood loss is the primary cause of fatalities when bullets are involved. 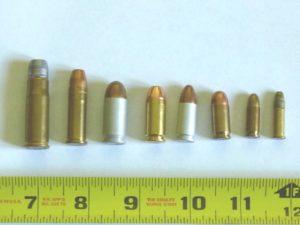 From left to right, the bullets are .410; .38 Police Special; .45 ACP; .40 ACP; 9mm Luger; .380 ACP; .25 ACP; .22 Long Rifle.  The ACP suffix stands for “automatic Colt pistol” because that was the first firearm to use that shell casing design.  The decimals refer to the diameter of the bullet at its widest point (and remember, the bullet is the nosecone atop the shell casing), measured in inches.  A .45, then, is 45/100 of an inch at its widest point.  You’ll also see bullets measured in millimeters.  Thank NATO for that.

And here is an assortment of rifle bullets: 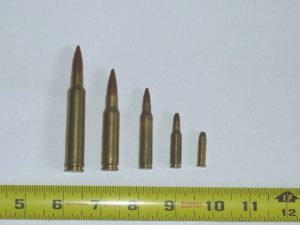 Note, then, that both of these bullets are .22 caliber: 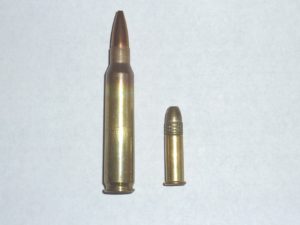 So, there’s more to bullet energy than caliber.  The amount of propellant and the weight of the bullet, usually measured in grains, have a lot to do with the lethality of a bullet.  The rest of the lethality equation has everything to do with shot placement.  A small bullet, properly inflicted, will do more harm than a poorly aimed big bullet.  Ronald Reagan and George Wallace were both critically wounded by that little bitty .22 long rifle round, and Bobby Kennedy was killed with one.

Most modern bullets travel at supersonic speeds.  Since the speed of sound represents the speed at which air molecules can get out of each other’s way a bullet in flight creates a pressure wave at its nose, and because Mother Nature abhors imbalance, that positive pressure at the nose creates a negative pressure at the tail.  When a bullet hits a person, the pressures surrounding the projectile do an enormous amount of damage to surrounding tissues.

Here’s a slow motion video of a 9mm pistol bullet impacting ballistic gelatin, which is designed to simulate the consistency of human flesh:

See how that wound channel opens and snaps shut?  Imagine that all of that energy was being absorbed/inflicted on a liver.  Getting the bullet out is far from the most pressing emergency in many bullet wound cases.

Here’s a similar video showing the damage inflicted by a .308/7.62mm rifle bullet:

So, yeah.  A bigger, heavier bullet traveling at a much greater speed causes a heck of a lot more damage.  The reason you’re able to see such pronounced spiraling in that video is because the bullet is a hollow point, which is designed to open up on impact.  This is what a hollow point bullet looks like before it’s fired: 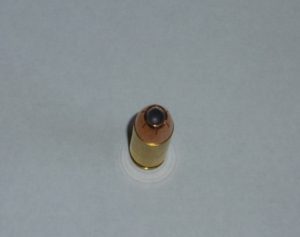 The common alternative to a hollow point is a full metal jacket, which looks like this: 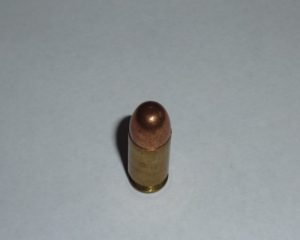 While the hollow point undoubtedly inflicts more damage upon the person it hits, the true purpose of the bullet’s design is to prevent over-penetration, where a bullet intended for a bad guy would not travel through-and-through to hit the good guy standing behind him.

We talk about research quite a lot here at TKZ, and I recommend that  anyone who writes about this stuff in their stories take some time to visit your local gun store or go to a gun show.  You’ll find lots of very nice folks who love to talk about all things firearms related.  Many gun stores will let you rent a gun and fire it on their range.  If you’re not comfortable handling them, no problem.  They’ll be happy to help you out.