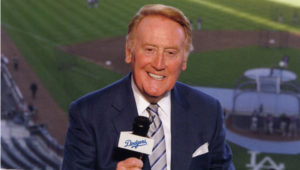 I’ve never known a breath of life without Vin Scully in it.

Growing up in Los Angeles, and being a die-hard Dodgers fan, I spent my youthful summers listening to Vinnie (we all called him that, he was our favorite uncle or best friend) call the games via my transistor radio. Many a night I’d fall asleep to that honey-toned voice and my mom would have to tiptoe in and turn the radio off.

And now he’s about to retire. After 67 years behind the mike for the Brooklyn and Los Angeles Dodgers.

It’s like summer itself will no longer be there.

Everyone acknowledges Vin Scully as one of the greatest (JSB would say the greatest) sports announcers of all time.

The question for us today (and for writers) is, Why? I’d say three things:

Precision: Vinnie is always so prepared, able to talk about each and every player who comes up to bat. On both the Dodgers and the opposing team. He knows their stats, their backgrounds, and the particular stories that turn them into individuals and not just numbers.

He also knows when and how much of that information to give. One of the greatest Vin Scully traits is not over-talking, as so many announcers do. He often just lets the crowd chatter or cheer. It’s like he’s letting you be part of the game. Thus, you never get tired of hearing Vinnie’s voice (one of the most naturally gorgeous in all sports … or any other verbal art form known to man).

Poetry: Vinnie has always been able to weave lovely and often unforgettable phrases into his announcing. He often cites great literature and even popular songs. I remember one game he was calling over forty years ago where he referenced a Jim Croce song, saying, “Tonight, they are playing like a junkyard dog.” I’ve never forgotten that. That’s what Vinnie can do.

Passion: One thing for sure, Vin Scully loves baseball. More than that, he honors it. He knows the rich history of the game, the great players, the important moments. When you listen to Vinnie call a game you are getting more than an account of the innings; you’re getting a history lesson, too.

I just had to write about Vin Scully today, as a bittersweetness overtakes me for the end of an epic era. Maybe I always thought Vin Scully would be there …

And in a way, he will be. For he called my favorite sports moment of all time. And it is now preserved on YouTube. If you want to appreciate the genius, the greatness that is Vin Scully, watch that entire clip of the Kirk Gibson home run in Game 1 of the 1988 World Series.

You cannot overstate the drama. The Oakland A’s take a 4-3 lead into the bottom of the ninth inning. On the mound is the most feared closer in baseball, future Hall of Famer Dennis Eckersley.

Gibson, the Dodgers’ most valuable player (along with pitcher Orel Hershiser), couldn’t play. He’d injured both legs during the NLCS, and could barely walk, let alone run. But as the ninth inning rolled on, Gibson (in the clubhouse at the time) told manager Tommy Lasorda he could pinch hit if need be.

Which is when Tommy Lasorda faked out Eckersley and the A’s. With two outs, and Mike Davis at the plate, Lasorda put Dave Anderson in the on-deck circle. Eckersley decided he’d rather pitch to Anderson, and pitched around Davis, who drew the walk and trotted down to first base.

Watch the clip to see what happened. 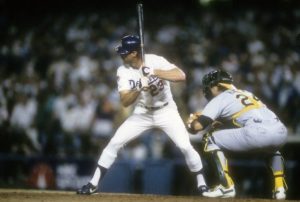 Vinnie, calling the game with Joe Garagiola for NBC, was as precise and colorful as always. At one point he describes Gibson “shaking his left leg, making it quiver, like a horse trying to get rid of a troublesome fly.” Perfect!

But what is so endearing about Vinnie and the home run is that his love of the game and its iconic moments couldn’t be held back. When Gibson’s ball cleared the right field fence, Vinnie for that instant became a fan himself. Not of the Dodgers, but of the game of baseball. He knew this was a moment on par with Bobby Thompson’s dramatic home run back in the 1956 pennant race, or Bill Mazeroski’s game 7 World Series winner in 1960.

So when Vinnie says, “She is GONE!” there’s a little extra oomph in the word gone that reveals the great one’s heart.

As Gibson rounds the bases, with the crowd going nuts, Vinnie lets the TV audience share the experience by saying not one word. He waits over one full minute, as Gibson’s teammates mob him, and then delivers one of the great lines in broadcasting history: “In a year that has been so improbable, the IMPOSSIBLE has happened!”

Be precise. Yes, you can—indeed must—let your imagination out to play. But if you want to be a selling writer, at some point you must use the tools of the craft to shape readable fiction. Vin Scully is still one of the hardest working broadcasters in the game.

Be poetic. John D. MacDonald wanted “unobtrusive poetry” in his style. Not so much that it stuck out, shouting Look at this great writing! But more than plain vanilla. The latter can work, but why not reach for more? Vin Scully elevated every game with his prose.

Be passionate. Love telling stories. Joy is one of the big secrets of popular fiction. You can hear the love and joy in Vin Scully’s calls. Here is a man who had his dream job for nearly seven full decades. We always knew it.

Ah, Vinnie. I will miss you so much. You made my summers unforgettable. You transported me to the stadium when I couldn’t be there. And even when I was, I had my transistor with me so I could hear you call the game. So, I might add, did about half of Dodger Stadium.

And someday, when I write the best book of my life, and know it, and hit the key that publishes it, I want to hear your voice in my head:

So who were the voices of your childhood?

27 thoughts on “Saying Goodbye to a Legend”