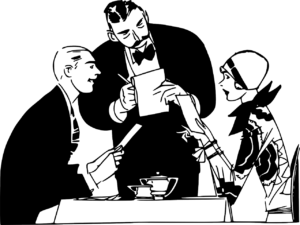 coffee and talk about life, the universe and the plot. The temptation is to have it all easy-peasy because, after all, they’re friends. The danger for the writer, though, is that without conflict or tension the scene takes on the dreadful patina of dullness. Which means it is the readers who lose their appetite … for reading on!

Sometimes I will hear the rejoinder that this is what we do in life. We have coffee with friends, we have dinner with pals. Why can’t we put that in our books?

Well, I say, you have fuzzy slippers in your life. Do you put them in your books? (Okay, well, if you do, put snakes inside them.)

Then I say that fiction is not a reproduction of real life. It’s a stylized rendition of life for a fictional purpose. And the most important part of that purpose is keeping readers glued to the page! A scene featuring “happy people in Happy Land” doesn’t stick.

Now, I’m not saying you shouldn’t do a quiet scene with friends or allies in a Starbucks or a restaurant. The trick is to have something going on that gives off a vibration of tension. It’s not that hard to do, either. But the effect on readability is palpable.

Let’s have a look at an eating scene from Michael Connelly’s Echo Park. Harry Bosch is investigating an old murder for the Open-Unsolved unit of the LAPD. He’s asked FBI agent and profiler Rachel Walling for help. Bosch and Rachel had once been intimate, and have started up again, though they are uncertain about the wisdom of this.

In this scene, Connelly wants to give us a lot of information and theorizing about the case. That could easily make this a “talking head” scene. But Connelly knows better than that. Bosch has arranged to meet Rachel at a fancy downtown restaurant. The scene begins:

Bosch had lost track of time while in the library. He was late. Rachel was already seated and waiting for him. She was holding a large one-sheet menu that obscured the look of annoyance on her face as Bosch was led to the table by a waiter.

“Sorry,” Bosch said as he sat down.

“It’s okay,” she replied. “But I already ordered for myself. I didn’t know if you were going to show or not.”

She handed the menu across to him. He immediately handed it to the waiter.

He drank from the glass already poured for him while the waiter hurried away. Rachel smiled at him, but not in a nice way.

So here’s the first tip: find some form of TENSION between the allies. In this case, Bosch is late for his meeting. Rachel is annoyed. We want to keep reading to see how this will play out.

Rachel then warns Bosch that he’s not going to like what he ordered. It was sashimi. She knows Bosch wants his fish cooked. Oops. But Bosch decides he better let it go and give Rachel the info he has.

This leads to the second tip: make the FOOD a source of discomfort. Bosch has begun his summary of the events:

It took him fifteen minutes and during that time their lunch was served. Of course it came fast. It didn’t have to be cooked! He felt lucky to be the one doing all the talking. It gave him a ready excuse not to eat the raw fish put down in front of him.

[As the scene moves on, Rachel finishes her sashimi. Bosch then pushes his own plate, which he hasn’t touched, over to her.]

“No, I’m not saying that Olivas was the killer. I am saying he was gotten to by the killer. He and O’Shea. The real killer came to them and made some sort of a deal.”

“Harry, this just sounds so …”

She didn’t finish. She pushed the sashimi on her plate around with her chopsticks but ate very little of it. The waiter used the moment to approach the table.

“You didn’t like you sashimi?” he said to her in a trembling voice.

She stopped when she realized she had almost a full portion on the plate in front of her.

“I guess I wasn’t very hungry.”

“She doesn’t know what she’s missing,” Bosch said, smiling. “I thought it was great.”

Third tip: Use the servers to provide a well-timed INTERRUPTION. Here, Rachel was about to tell Harry how his theory sounded. But before she could continue, the waiter comes back to the table. This is a clever ploy, delaying the payoff, which is another way to say that Mr. Connelly knows how to make us read on.

Here is a slice from my novel Romeo’s Way. Mike Romeo is under cover in San Francisco, trying to get hired as security for a political campaign. Kat, the campaign aide he has made contact with, is interviewing him. Mike proved himself earlier that day, and now Kat takes him to dinner at Fisherman’s Wharf on the campaign’s dime.

“I can only get back so far into your past,” she said. “I get back to when you were fighting, but before that there’s virtually nothing. There was some fluff of a bio in a program once, but to be quite honest with you, it didn’t sound believable.”

“That’s because it was fiction,” I said. “They needed something, so I made something up.”

“Okay, then what’s the real story?”

“It’s not something I choose to publicize.”

“I also believe in privacy. What I choose to keep private is nobody’s business.”

“Which means you have something to hide.”

“Everybody has something to hide,” I said. “Tell me about your sex life.”

Her cheeks flushed, obvious even in the candlelight.

“I could get really mad at this point.”

“But you won’t,” I said. “Because it’s not a good move. And my impression of you is that you make nothing but good moves.”

Before she could answer, the waiter appeared with the bottle of wine.

In this clip, I have used a fourth tip: CONFLICTING AGENDAS. Kat wants Mike’s full background. He doesn’t want to give it. They both want to test each others’ boundaries. And then the waiter interrupts.

So there you have it. Four simple ways you can turn a sitting-down-for-coffee-or-food scene into readable fiction: tension, food, interruptions, agendas.

Mix and match according to taste. Your readers will enjoy the meal.

39 thoughts on “How to Write an Eating Scene”