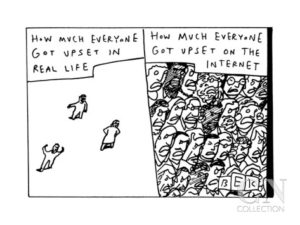 When it comes to social media, as a general rule, I try to avoid the contentious issues of politics and religion, but, amid the relentless (and often horrific news) these days it seems increasingly hard to find a way of navigating  the online world without encountering (for me at least only third hand) a polarizing level of animosity and aggression on Facebook, Twitter and other social media platforms. I’ve lost count of the number of times I’ve I seen people posting that they have to ‘disconnect’ for a while, simply to avoid the online fray which shows no sign of abating.

Even relatively innocuous posts in support of a victim or sharing a news item, can seem to provoke prolonged, overly aggressive – even (dare I say it) crazed responses in the comment section. Flame wars erupt and, as far as I can tell, people who (I assume) are rational, reasonably tolerant people in person, engage in public brawls and name-calling with a level of belligerence that belies all hope of reasonable discourse. So how is someone supposed to navigate the social media minefield in an online culture  where anyone and everything is fair game?

As an author, I try to follow what I thought was basic social media etiquette. Beyond avoid religion and politics, I try not to be overtly self-promoting, self-aggrandizing or generally annoying. My main aim is to present myself as an authentic person who readers find accessible and (hopefully) engaging. When it comes to my personal online persona, I follow pretty much the same rules – just with photos and fun (I hope) added into the mix. But now I feel stymied in many respects – increasingly uncertain and unwilling to post items that could inflame some kind of inadvertent comment war. All too often I read the comments on friend’s posts with a growing sense of alarm and incredulity as people rip into one another and engage in behavior that (I hope) they never display in real life. I’m not sure how we got to this place, but it’s certainly one in which I tread very, very carefully…

In light of this, I feel like we need to create some new rules for online etiquette – rules which others may not adopt but ones which I feel balance common sense, good manners and basic norms of rationality. Here’s my list so far and I’d love to get TKZers input and feedback

So that’s my list so far. How about you? What would you add? How do you feel about online etiquette (or lack thereof) these days? How do you currently navigate the social media minefield?