This month a writer named James Patterson (who has had some 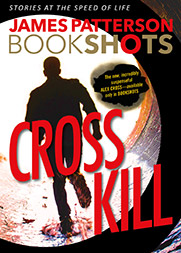 success and may break out soon) began a new enterprise. It’s called BookShots. These are to be what he calls “short novels” and what everyone else calls “novellas.”

Patterson, the former advertising man, is nothing if not strategic, even visionary. He is always looking for ways to expand his product line and this plan is brilliantly counterintuitive –– find new places for physical books.

According to a story in the New York Times, Patterson “wants to sell books to people who have abandoned reading for television, video games, movies and social media.” He wants to write fiction that is “shorter, cheaper, more plot-driven and more widely available” than full-length books. But here’s the part that really intrigues me:

[E]ventually, Mr. Patterson and his publisher want to colonize retail chains that don’t normally sell books, like drugstores, grocery stores and other outlets. They envision having BookShots next to magazines in grocery store checkout lanes, or dangling from clip strips like a bag of gummy bears.

“Those venues are very inhospitable to traditional publishing, but we think this is a type of book that could work very well there,” said Michael Pietsch, the chief executive of Hachette Book Group, which publishes Mr. Patterson’s books in the United States through its Little, Brown imprint. “He has enough recognition that his name can make it work.”

In some ways, Mr. Patterson’s effort is a throwback to the dime novels and pulp fiction magazines that were popular in the late 19th and early 20th century, when commercial fiction was widely available in drugstores.

It’s an ambitious plan, and I doubt any writer except Patterson, backed by mega-publisher Hachette, could pull this off. Maybe Stephen King if he also branded his name as Patterson does. For that is part of the strategy as well:

Hachette is betting that Mr. Patterson is famous enough to overcome … obstacles. The company is planning to publish 21 BookShots in 2016, including thrillers, science fiction, mysteries and romances. The first two, out in June, are “Cross Kill,” a book by Mr. Patterson starring his popular recurring character Alex Cross, and “Zoo II,” a science-fiction thriller written by Mr. Patterson and Max DiLallo. All the books will be written or partially written by Mr. Patterson, except the romances, which will be labeled “James Patterson Presents.”

All well and good. This is a business, after all, and no one has been a more astute businessman than James Patterson. He provides a product. That product entertains. There is an exchange of money for perceived value. And everyone’s happy.

Well, almost everyone. I hopped over to Amazon to have a look at the first BookShot, Cross Kill. Some of the reviewers have a complaint: the ending is incomplete. As one reviewer put it: The story is good, typical Patterson but it ends with a huge cliffhanger and that is what I do not like. … I had expected a short book, like a short story and I liked the idea but now I must say I am disappointed. It would be good if it could be explained where in the Cross Universe these Bookshots fit.

Had the book been advertised as the first part of a serial, all would be well. That’s what Stephen King did back when he and his publisher released The Green Mile. It was done in six installments, and that’s how it was advertised. So readers knew when they purchased one of the short books there would be another to come.

So what does all this mean?

It’s a great new era for short fiction. Short stories (up to 7k words or so); novelettes (7k – 20k); novellas (20k – 50k); and short novels (50k – 70k). You can use these to hone your skills, establish a digital footprint, and make new readers. I’ve been pleased that my series of novelettes about a vigilante nun, Force of Habit, which I did purely for fun, has generated its own little fan base. That’s the pulp fiction idea, and I love that it’s available to us now via direct digital publishing.

But write your stories to completion! No matter the form, the ending has to satisfy the reader. They expect an ending, unless in your marketing you are absolutely clear that you are writing a serial.

I remember years ago when my wife was reading a thriller and kept telling me how good it was. I would say, “But what about mine, honey?” And she’d say, “Shh, I’m reading.”

Anyway, she got to the end and … there was no ending! She was at first confused, then ticked off. I had a look at the book. It was a bit shorter than a “big” novel. And it indeed left off right in the middle of a crucial moment.

Only later did I learn that the publisher had decided to take a “really big” thriller and divide it in two. Their thinking was, “Hey! This is a good novel, and we can double our money by making it two books! The readers will be panting for the rest!”

Only they did not pant. They punted.. They did not want to be “tricked” again. The second book went nowhere.

So don’t treat your short fiction as a throwaway. Over the last few years most of the A-list writers, at the behest of their publishers, have dashed off short ebooks to augment their series or help sell an upcoming release. In several instances these have been less than stellar efforts, garnering a spate of 1-star reviews from fans. Maybe the A-list can get away with it, but the rest of us can’t. We need, more than anything, to establish “trustability.”

So, kids, write the best short fiction you can, every time out. And that means –– unless it’s a serial and the readers know it –– that you give them a satisfying ending.

Have you ever been burned by a story you thought was going to end, but didn’t? Or ended in such a fashion that it ruined all the good stuff up to that point?

And what do you think of this new pulp fiction idea? Do you think there’s a market for it?

Speaking of thinking strategically, if you’d like to pick up a book on how a writer can do that very thing, here it is..