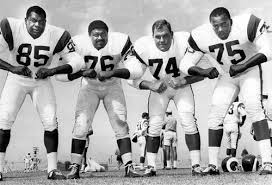 Being an L.A. boy, I grew up rooting for the Los Angeles Rams.

Heck, even Joe Namath for three games before his knees gave out for good.

Yes, there was another pro team that showed up in L.A. And even though they had my man Marcus Allen, it was hard to adopt them. Although I did meet Al Davis once. He showed me his Super Bowl ring. It was as big as a Volkswagen.

But then, in 1995, the Rams skipped town and parked themselves in St. Louis.

I gradually lost my rooting interest in the team.

But now, now! The Rams are back home (yeah, I know, Cleveland fans, the Rams started out in your fair city. But cheer up. You have the Browns!)

And in the recently concluded NFL draft, the Rams made a bold move, trading away a whole bunch to get the #1 pick. They used it to snag, it is hoped, their franchise quarterback,––one Jared Goff of the University of California, Berkeley.

Now the question is, will Goff be the guy? Or will he be a bust? Or something in between? I’m pulling for him all the way, and initial reports on his leadership and work ethic are good.

But what caught my eye, and leads me to today’s post, is what one of his Cal teammates said about him.

Zach Kline is a senior at Cal, the quarterback who watched Goff from the bench. Here’s what he had to say about Goff but, more importantly, about himself:

“I knew as soon as we were competing … he was a great player. Like, look at him. He’s No. 1 for a reason. There are few guys that are ready to play their freshman year. … Competing with Jared is probably the most beneficial thing that’s ever happened to me in my career. He made me kind of assess my play and all that. Because I know I’m a good player, and to be able to compete with him, it helps you and encourages you. When you play with good guys, you raise your game.”

That makes me like Zach Kline (which I will continue to do except when Cal plays USC). Because Kline demonstrates the heart of a champion. You don’t look at your competition and fold; you let competition push you to get better.

Writers need to hear that. Because it’s quite easy for our ilk to fall into the pit of envy. You see someone from your critique group get a big contract. Or somebody you’ve met at a conference going indie and making crazy sales. You know you’re good, maybe you think you’re better than that person who just hit the jackpot. Envy may sneak up on you and grab the back of your brain. Ann Lamott talks about this in Bird by Bird:

If you continue to write, you are probably going to have to deal with [envy] because some wonderful, dazzling successes are going to happen for some of the most awful, angry, undeserving writers you know—people who are, in other words, not you. You are going to feel awful beyond words. you are going to have a number of days in a row where you hate everyone and don’t believe in anything . . . If you do know the author whose turn it is, he or she will inevitably say that it will be your turn next, which is what the bride always says to you at each successive wedding, while you grow older and more decayed . . . It can wreak just the tiniest bit of havoc with your self-esteem to find that you are hoping for small bad things to happen to this friend—for, say, her head to blow up.

Don’t wish for heads to blow up. Up your own game instead.

The crucial thing is not to compare yourself to another writer, but to see what they do well and try to do the same with your own writing.

Elmore Leonard was a master of dialogue. You read his dialogue and you’re like a second-row cellist listening to Yo-Yo Ma. You give him is due. You nod in appreciation. Then you dig into your own technique and figure out how to improve it.

And how do you do that?

And that’s what a writer should do about competition.

What are you doing to up your game?

33 thoughts on “Writers and Competition”