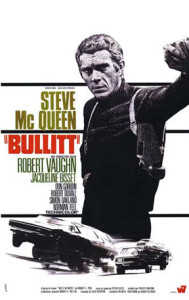 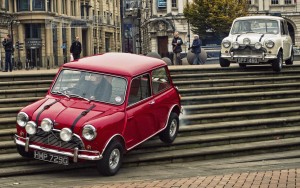 But traditional mysteries can have car chases, too. I wanted a car chase in The Art of Murder, my new Dead-End Job mystery. My private eye, Helen Hawthorne, doesn’t drive a muscle car. Good detectives have to blend in. In South Florida, that often means a white car. Helen has a white four-cylinder PT Cruiser. 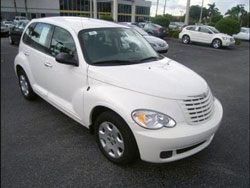 Steve McQueen would weep.
But I got my car chase, thanks to an equalizer – speed bumps. The extra-wide ones, a.k.a. traffic calmers or “speed humps.” (Cue the risque jokes.)These speed bumps are in a lush Fort Lauderdale neighborhood known as The Landings, where residents dock their yachts out their back doors.

I can’t reveal the killer’s name, gender, or vehicle model, but here’s The Art of Murder car chase in The Landings. Watch that yacht. It will be in the car chase, too. 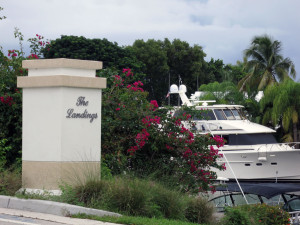 The Art of Murder Car Chase
The killer roared out of the driveway toward The Landings, blasting across Commercial Boulevard as the light turned yellow. Helen followed, accompanied by a chorus of car horns and upraised middle digits.

This wasn’t a fair race. Helen knew her trusty Igloo was seriously underpowered. The killer’s car had twice as many horses as the PT Cruiser. The killer floored the car and it flew over the north bridge into The Landings. Helen’s Igloo tried its best to keep up, but its workhorse engine was no match for the powerful car. Still, Helen floored her Cruiser.
And saw the speeding car slam on its brakes.

The speed bumps! Suddenly this pursuit was almost fair. The sports car raced forward again, then slammed on its brakes for a bump. Race and brake. Race and brake.
The odd stop and sprint chase continued for four speed bumps, with Helen’s intrepid Igloo managing to keep pace.

Helen struggled to push her car on the straightaway and spot the speed bumps in time to brake. The two cars lurched through The Landings.

After the fourth speed bump, the killer powered through a four-way stop to the angry blare of honking horns. Helen made a full stop.

She waited her turn for two cars, then crossed the intersection and floored the Igloo again. Her finger pressed SEND for 911. I should have called the police sooner, she thought. I can’t let the killer escape.

The killer was turning left at the next block. There were no speed bumps on that street. It bordered a canal. Helen was going to lose the killer.

“Help!” Helen shouted into her. “I’m pursuing a killer in The Landings. I’m almost at Fifty-sixth. Get the police here. I can’t talk.”

Helen slammed the brakes again, and the Igloo jounced over the speed bump. Her cell phone clattered to the floor. Helen could hear the 911 operator and hoped the woman believed her plea for help.

Up ahead, she saw the killer make a screeching turn on two wheels, heading straight for a yellow moving van with its ramp down, parked in the street. The killer swerved to avoid it, and nearly hit a pony-tailed woman walking her fluffy white shih-tzu.

The killer swerved again, narrowly missing the woman and her little dog.

And the accident seemed to happen in slow motion.

The killer lost control of the car on the small humped canal bridge. It sailed over the bridge railing and crashed into the white yacht tied up at a backyard dock. The front end of the car smashed through the yacht’s pristine white hull. The car’s back end was on the dock, sliding toward the water. 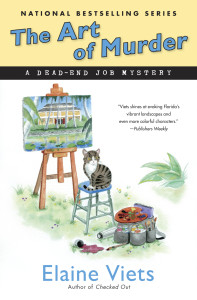 The Art of Murder is my fifteenth Dead-End Job mystery. Helen Hawthorne and her landlady, Margery Flax, tour Bonnet House, the whimsical mansion-turned-museum in Fort Lauderdale and admire an up-and-coming artist at a museum painting class. When the talented artist is murdered, Helen is hired to find her killer. She discovers the artist’s sketchy past. Was the promising painter killed by her jealous husband? A rival using her artful wiles? All that and a car chase-boat crash, too.

Pre-order The Art of Murder

14 thoughts on “Using Your Disadvantages”