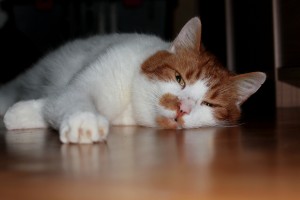 A TV show is about to be cancelled. Not exactly headline worthy, I know. Happens all the time. Only this time it was a series I was trying to get into, mainly because I’ve liked the lead actor in the past.

The ratings were okay for the opener, but have gradually declined. I am one of those decliners. After four episodes I stopped watching.

The show has a unique setting, a cast of beautiful people, and an ongoing criminal investigation. What went wrong?

I’ll tell you what went wrong: I just did not care about any of the characters.

On the surface––and this must have impressed the network suits––the show had “everything.” Glam, glitz, beefcake, cheesecake, a star. But after four hour-long episodes there was not a single character I bonded with.

Which, dear writer, is the greatest danger to your own novel.

You simply must connect reader and character, and right out of the gate, too.

How? By knowing that this is all a function of two essential dynamics, which are … wait for it … plot and character.

Ah, but so often missed because one is often emphasized at the expense of the other.

Character alone won’t do it. If it did, maybe I’d be able to get through more than twenty pages of A Confederacy of Dunces (I’ve tried three times and never made it).

Plot alone doesn’t do it, because events have to matter to a character who matters to the reader.

Now, there are lots of techniques professional fiction writers utilize to make a character someone we care about. In my 27 Fiction Writing Blunders I have no less than five chapters attacking the problem from different angles.

But today, I want to suggest a single, powerful question you should ask about all your main characters.

You need to set yourself up for this, because it’s a question not to be tossed out lightly.

So find a comfy spot. I like to use a corner table at my local coffee palace.

Have a notepad ready.

Spend ten minutes thinking about anything except your novel. Observe people, read some news or a blog, or watch “Charlie Bit Me” a couple of times.

Next, turn yourself (as much as possible) into a fully objective reader who is considering buying your book.

If I were at a party and someone told me about this character, what she’s like and what has happened to her, would I want to spend two hours listening to her tell me her story?

Be merciless in your answer. Write down the exact reasons you would want to hear more. If you don’t come up with good ones, you’ve got work to do.

If someone described to me a selfish, flirty Southern belle, I wouldn’t want to spend two seconds with her. But when I hear that she is the only one in her family with the grit and guts to save her home during and after the Civil War, I think I’d want to hear more.

If someone tells me about an unsure FBI trainee, who came from poor circumstances, I’m mildly interested. But make her the only person in the entire bureau who can get the most devious, intelligent, and malevolent murderer in the annals of crime to talk, then I’m down for the whole story.

PIs are a dime a dozen. But if it’s Philip Marlowe narrating, I want that two hours just to listen to how he describes all the twists and turns.

It was a blonde. A blonde to make a bishop kick a hole in a stained-glass window.

She gave me a smile I could feel in my hip pocket.

There was a desert wind blowing that night. It was one of those hot dry Santa Anas that come down through the mountain passes and curl your hair and make your nerves jump and your skin itch. On nights like that every booze party ends in a fight. Meek little wives feel the edge of the carving knife and study their husbands’ necks.

You have your assignment. Would you, as a perfect stranger, feel compelled to listen to the story your main character wants to tell?

And then the greatest danger to your novel will be no more.

17 thoughts on “Your Novel’s Greatest Danger”