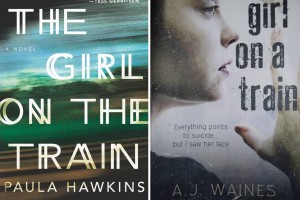 My husband alerted to me to this article in the Wall Street Journal ( ‘loved-the-novel-about-a-girl-on-a-train-you-may-have-read-the-wrong-book’) about the unexpected plot twist associated with the best selling book by Paula Hawkins, The Girl on the Train, and readers confusing it with another thriller written by Alison Waines, Girl on a Train. Since my book group just did Hawkins’ book (and we all actually read the right book!) it made me chuckle – as it would seem that many book groups, book reviews and reader purchases have fallen prey to the confusion that comes from two, very similarly titled books.

I don’t believe I’ve ever actually bought the wrong book based on the title alone, but according to this article this is becoming a more common issue especially with the plethora of e-books now available. The article pointed to the novel ‘Joyland’ by Emily Schultz who saw her e-book sales jump after Stephen King’s ‘Joyland’ was released (I’m suspecting some readers would have been a little upset getting the former when they thought they were getting the latter – but Schultz said the confusion did open up a new audience for her!).

When I’m choosing the initial title for a work-in-progress I always search on Amazon to make sure that the proposed title I’m thinking of hasn’t already been taken. Likewise I usually do a quick Google search just to make sure the title isn’t  some well-known book/blog/other entity that I’m totally ignorant of…Now I know publishers often change book titles anyway so it’s not something I get too hung up over but still, I try not to knowingly call my latest book something really similar to one already available (especially when it’s the same genre). Likewise I avoid choosing titles that are likely to confuse readers or deliberately mimic a current bestselling series  (the WSJ pointed to a good example – ‘The Girl with the Cat Tatoo’). Still I’m sure it was a happy coincidence for Waines when her sales numbers took off because readers were buying her book, mistaking it for Hawkins’ bestseller!

So, have you ever bought the wrong book based on a confusing or similar sounding title? Have you perhaps benefitted as an author from a confusion like this? When choosing the title for your book how much research do you do to ensure yours will stand out (or do you simply not worry?)

Happy Thanksgiving this week to you all. May you, like Alison Waines, be the recipient of some happy coincidences in the holiday period ahead!

14 thoughts on “Girl on the Wrong Train?”