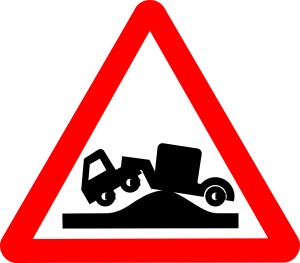 There are two reasons to study the craft of fiction writing. The first is to learn tools and techniques that actually work, that have been tested over time. Some of these might be so valuable as to rise to the level of “rules.” A rule, of course, can be broken, but only if you have a very good reason to do so and know exactly what that reason is. Otherwise you’re flirting with danger, like a brain surgeon who decides on a whim to use a butter knife instead of a scalpel.

The other reason for study is to learn what doesn’t work, what trips up a story. You learn not to do certain things.

Some of these errors are relatively small. But commit too many of them and they will have a cumulative, and negative, effect on the reader. I call these errors “speed bumps.”

It’s like this. You’re enjoying a pleasant drive through a scenic part of the country. You’re relaxed, the vistas are inspiring. You forget for a moment that you’re driving and you just take pleasure in the sights.

Then you hit a speed bump. You come out of your reverie for just a moment. But if it’s the only bump you hit, you quickly get back into the nice-drive mode.

But what happens if you keep running over speed bumps? Pretty soon your nice drive is completely ruined and you vow you’ll never take this road again.

That’s the way it is with speed bumps in writing. Most readers don’t consciously analyze these. They don’t sit there and think, Wow, he should not have used an adverb there! But there is a little jolt inside that reader’s mind, back there in the subconscious zone. I contend that enough of these small bumps can ruin the reading pleasure of a book. In some cases it may mean the difference between a reader seeking out another of your titles, or deciding not to give you further consideration.

You don’t want that, do you? So un-bump your writing! That’s one sure way to elevate your craft.

I am now going to offer you an exhibit. This is from a well-regarded and bestselling writer, one whose books I have enjoyed in the past. I want you to read it over and see if you can spot the speed bump. The scene is a restaurant:

“So she didn’t talk specifically about her mother?”

“Just about the murder. The murder is very big in her life.”

The waitress brought us menus.

“No reduction of kiwi,” I said.

The waitress took our order.

“Why do you suppose she didn’t want me to talk with her aunt?”

“She ever talk about her father?” I said.

“No. I always sort of assumed he was dead.”

“She never mentioned any.”

“How long have you known her?”

“Two years,” Paul said. “We worked together in the first play I did in Chicago. When she’s up, she’s a hell of a lot of fun.”

The waitress brought smothered pork chops for Paul, spaghetti and meatballs for me.

“Why are you asking about her?”

“Because I don’t know about her.”

Paul was nodding as I spoke.

Ask yourself if there is any small thing in that scene that might cause a casual reader to feel a subconscious bump, and a more alert reader to actually stop and say, Hold on there a minute. Something’s not right!

Here’s my take: These two men are in a restaurant discussing a murder that took place years ago. The waitress appears and gives them menus…and then stands there while they joke around. In the real world, a waitress would leave the menus and give them time to read them. Or ask for a drink order. I waited tables, my friends!

But maybe we can let that one slide.

They continue their conversation. What they say to each other takes about 23 seconds. I timed it. And then the waitress returns with their full meals! There is no time lapse, either, because as soon as the plates are put down the conversation continues in exactly the same spot!

So either this waitress is the love child of Supergirl and The Flash, or reality has been blithely tossed out the window.

It’s a pet peeve of mine: restaurant scenes where the food timing is all off. I do see it often. In film it’s usually a bar scene where they order martinis and the bartender goes out of the scene for fifteen seconds, then comes back with two perfect martinis that could be neither shaken nor stirred. It always takes me out of the scene. And it’s so unnecessary.

Care enough about your readers to study the craft so you can root out speed bumps. Some will slip by. You just don’t want to fill the road with them. I’m here to help.

There. Off my chest. Now it’s your turn. What speed bumps to you notice in books? Pet peeves that take you out of the story? What do you have to watch for in your own writing?