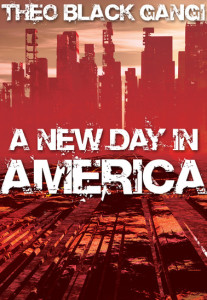 My guest today is Theo Gangi, the Director of the writing program at St Francis College. His stories have been anthologized in First Thrills, edited by Lee Child, The Greensboro Review, The Columbia Spectator and the Kratz Sampler. His articles and reviews have appeared in Buzzfeed.com, The San Francisco Chronicle, Mystery Scene Magazine, Inked Magazine and Crimespree Magazine. Theo and I first met in NYC when our books debuted in 2008 at ITW’s Thrillerfest. I’ve enjoyed his gritty writing ever since. Please welcome Theo, TKZers.

A New Day, A New Genre

I admit it– the inspiration for my new novel A New Day in America was not mine initially. The somewhat notorious writer James Frey approached me with the idea for the tale of Nostradamus Greene and his daughter Naomi: a post-apocalyptic father-daughter survival story.

If I’d had a project I was in love with at the time, I’m not sure how I would have reacted. Screenwriters are accustomed to inheriting ideas and collaborating, but the mythology of the Novelist is the lone, solitary storyteller. However, once I found an inspiration to draw on, the work became mine as much as anything I’ve written.

The post-apocalyptic world—the desolate lands, the loss of the structure of civilization, the father who braves survival, and the daughter who has seen too much—recalled a story from my formative years. 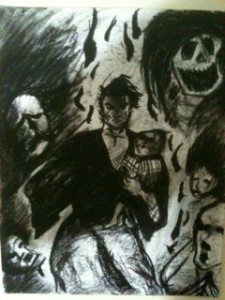 Apocalypse stories, while set in the future, are actually a return to the past. The time after modern civilization would resemble the time before it. The landscape of feudal Japan felt just right. Samurai assassin Itto Ogami and his son Daigoro serve as a great model for Nostradamus Greene and Naomi. Doing some sketches, I even found some visual symmetry. The paradox of the killer-father character has a brutal simplicity. A man with a gun is a killer. A man with a gun and a child at his back is a hero. 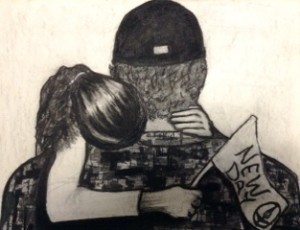 The idea was freeing for a couple of reasons. For one, I had some much-needed simplicity, and in the past I’ve had a tendency to over-complicate my work. Second, I got to play with reality itself.

My first book, Bang Bang, is a hardboiled, botched-robbery sort of urban crime thriller. While the hero’s ability to rack up a body count of a dozen or so in a single night might stretch the realm of reality, the book is firmly set in the real world. For A New Day in America, writing in a post-apocalyptic world meant I could create the whole thing. I had to invent setting, history, events, and the all-important rules.

As a writer I always saw craft as a kind of minimalist-vs-maximalist approach. My biggest influence was Elmore Leonard, who famously didn’t write the parts the reader ‘skips anyway’, and once said he read Hemingway every morning before writing, to get the feel of reduction in his writing process. I love Dashiell Hammett, whose minimal approach to books like Red Harvest and The Maltese Falcon would’ve made Hemmingway proud (‘The stuff that dreams are made of’ is an invention of filmmaker John Houston, and far too sentimental for Hammett). The idea being, don’t waste the reader’s time and attention on an eloquent description of a back alley, because the reader know what a alley looks like, and wants to know what your characters will do and say, not that there’s a garbage can that’s tipped over, or a couple of chicken bones in the gutter. The empty spaces of great noir are poetic in and of themselves.

When writing in a world that has suffered a recent apocalypse, you can’t get away with that approach. If you allow the reader the space to fill in your apocalyptic world, they will likely visualize some stock imagery from this movie or that. Mel Gibson will poke his head out of a tricked out Mad Max vehicle in the background. A zombie might appear in the reader’s imagination even though there are no zombies in your book. To write in a speculative world is to build one. Visuals such as a New York City skyline that looks like a king’s crown—skyscrapers line the outer rim, but nothing stands within. 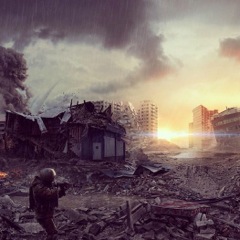 The process required quite a bit of overwriting and then cutting, so the sense of the world was greater than the word count. World building aside, the fundamentals are the same as any kick-ass thriller: Danger, conflict, bravery, human connectivity and impossible choices. The America that’s reduced to rubble offers a vehicle for the same challenges that the best thriller heroes endure—back to the wall, knife to the throat, what do you do? How do you find a way to assert yourself on a world that’s gone to hell? Is your next move moral or practical? Can you save them all? Can you save the ones that matter most?

The apocalyptic scenario creates a series of Sophie’s Choice sorts of situations. I’ll relate it this way– say there’s a train bearing down the tracks full of ten innocent people. The track forks: one way is a brick wall. The other way is your child tied to the rails. You stand at the switch. Which do you chose?

I imagine most people would chose to save their child, as I would. But what if there’s 100 people on that train? 1,000? A New Day in America is about a father who makes the decision to save his child over and over again. 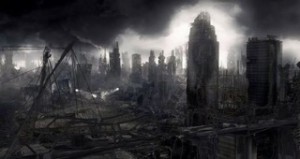 Question 1: TKZ Question for Discussion: If you could take a few non-essential luxuries in your survivalist bunker, what would they be?

Question 2: Have you ever written a book that wasn’t your original idea? 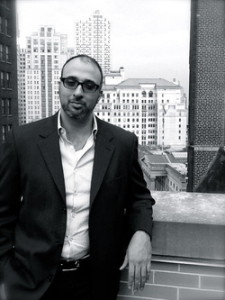