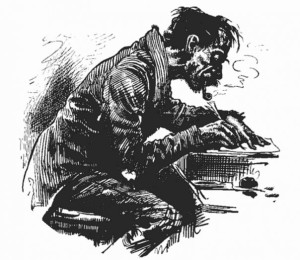 A couple of suggestions. Always check your pop culture references to make sure they’re not too dated. I hope I’m not insulting Dolly Parton, but is she that well-known anymore to people under 40? I’ve been editing my WIP and saw that I’d referenced a hit song from the 80s. Oops. I did a little research and found a hit song from 2005 that worked much better.
Even so, be selective with these things, because in a few years they may become terribly awkward. How about all those books published before 1995 that used favorable O. J. Simpson references?
Now to some micro-editing:
She was no schoolgirl, the horizon of forty was clear in her face, but she owned it.
Here is where our good friends Show, don’t tell and Don’t gild the lily come in. That first clause is a tell. And it is not necessary, because the rest of the line does the work and does it well:
The horizon of forty was clear in her face, but she owned it.
Isn’t that crisper? You want that standing alone, not fuzzed up with a tell before or after. I see this all the time. Things like: I ran up the hill. My lungs were on fire. Sweat flopped off my forehead. I was dog tired.
That last sentence adds nothing. Worse, it takes something away from the immediate experience by the reader. It’s a little “speed bump.” Too many of these and the ride is ruined.
Let’s look at this sentence now:
I took the out-stretched hand dripping with rings and jangly bracelets.
I like the use of sight and sound here. But a tiny speed bump as I was wondering how jangly bracelets were dripping from her hand. It’s not too bad because know what the author meant to convey. Still, I’d consider making it clearer. Something like:
Bracelets jangled as she stretched out a hand studded with rings.
Finally:
This was a woman who could wrestle trays of beer mugs and make it look easy.
I don’t know how or why someone would wrestle a tray of beer mugs. I assume the author means some kind of carrying of heavy trays. But carrying is not wrestling.
In my own writing, the things I always find during revision are metaphors and word pictures that don’t quite make it. That’s when I hunker down and try to figure out a way to make them work or simply come up with something else.
I advise the writer to tweak this one, and also to brainstorm a few other word pictures. Then choose the one that works best.
All that being said, I am interested in this character who slid into the room in stilettos! And I’d love to see the next few lines be dialogue that begin to give us a picture of the narrator and where she works, and so on.
Thanks to the author for submitting this piece.
Other comments?