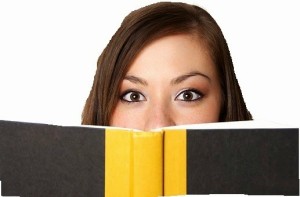 On Monday, guest Steven James had an excellent post on “Fiction Writing Keys for Non-Outliners.” I loved reading his thoughts on trusting the fluidity of the process and chasing after rabbit trails. I can relate to this as a writer. On Tues, our esteemed TKZ contributor, P. J. Parrish, expressed an argument in favor of more structure in her subtle post, “Sometimes You Gotta Suck It Up & Write The Darn Outline” in which she wrote about her love/hate relationship with outlining. These arguments got me thinking about my own process that has evolved over the years.


I started out as a total “pantser,” meaning I came up with a vague notion of characters or a story idea, then started writing to see where it would go. In general, I found this to be liberating and it unleashed my inner story teller, but I found (over time) that I ran out of gas about half way through and hit a wall. I always finished the project. I believe it’s important to finish what you start, if for no other reason than to learn how to get out of tight corners. There’s a true feeling of accomplishment to salvage a story that seemed to be headed for a dead end, and through practice, I learned what pitfalls to avoid. But as a writer under contract, I realized it would be a better use of my time to do some advance thinking on structure, rather than hoisting a shovel to shore up plot holes.


So I found a hybrid method that satisfied my “pantser” free spirit yet provided enough structure to serve as a guidepost – my lighthouse in the fog. I posted a more detailed presentation on TKZ HERE, but I wanted to highlight what this method does for me now. 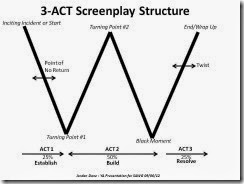 NOTE: A word of caution on any detailed plotting method: A plot structure can become rigid and restrictive if it inhibits the author’s exploration into a new plot twist or character motivation. As Steven James said, some rabbit trails should be explored. For me, this is the fun of storytelling – to uncover a hidden gem of creativity.


When I’m first developing an idea, I break it down into turning points (the 3-Act Screenplay Structure “W”) to get a general notion on structure. It helps me simplify the plotting/outline method into 5 turning points (the W). I can handle 5 things. I use this to write proposals and brainstorm with my crit group for their plots or mine. Rather than getting bogged down by character backstory or other details, I focus on “big ticket” plot movements to provide some substance.


The transition scenes between the turning points are still a mystery that can be explored, but in a synopsis, I can provide enough “meat to the bone” for an editor to get the idea and pair it up with a multi-chapter writing sample. Once I start writing the rest of the book, I can still explore rabbit holes and surprise character motivation twists to embellish the framework I’ve started with. I get my proposal out to my agent (with writing sample, synopsis and pitch) and keep working on current material. While I’m waiting to hear on a sale, I can set the material aside because I have a synopsis to act as a guidepost when I can get back to it. This method has also helped me plot out a whole series, to build onto the storylines (over a series of novels) and ramp up the stakes.


Focusing on turning points from the beginning (before I commit to the writing) has inspired me to spin major plot twists and “play with” the options I should consider. I can reach for complete 180 spins in a “what if” way. As an example of 180 degree turns, I’ve been inspired by the TV show CSI Vegas this season. Many of the episodes are so well written, they make a 180 turn at every commercial break and hit their marks with great twists. I’ve enjoyed this season so much that I record and go back over the plot by taking notes, to see how the writers developed the story. That’s what really good turning points can do for a book/TV show. They pull the reader/viewer into the story and challenge them to figure out where the plot is going. Who dunnit?


So I’m a reformed pantser who has found a way to keep a sense of free spirit, yet write with a framework when I’m ready to go. I feel more efficient, but I still have the flexibility to explore rabbit trails and trust my natural story telling ability.


I’d like to hear from you: How do you handle rabbit trails? Do you put all the work up front in the form of a detailed outline, or do you prefer a lighter touch to “discover” something as you write? Are you a hybrid plotter/outliner too?

33 thoughts on “I Am a Recovering Plot Pantser–There, I Said it”