My uncle Bruce was a bartender for many years up in Santa Barbara. Like most of the Bells, who came from (or were chased out of) Ireland in the 1700s, he has the gift of gab. He started doing close-up magic right at the bar. This proved exceedingly popular and before long he started billing himself as “Bruce the Baffling, Magician and Social Chemist.”

When I was I high school Uncle Bruce gave me a bunch of his tricks and I started getting into magic myself. That continued on through college. I loved it. I loved producing oohs and ahhs in people doing close-up. There’s nothing quite like a great card or coin trick, or the cups and balls classic, performed right under the noses of people a few feet away.
I got good enough that I was able to perform at the famous Magic Castle in Hollywood. Not for the adults at night (you really have to be great for that gig) but for the kids on Sunday afternoon. I billed myself as “Jim Bell, Master of the Amazing.” (Please hold your applause).
The best part about this was that I got to hang out at the Castle and sit around with some of the most famous magicians of the day. It’s a crime their names are not as well known as performers in other wings of entertainment. But for people who know the magic world, names like Charlie Miller and Francis Carlisle are as familiar as John Steinbeck and F. Scott Fitzgerald are to writers.
And if the most famous writer of the mid-20th century was Ernest Hemingway, then magic’s analogue was a man named Dai Vernon (1894 – 1992). 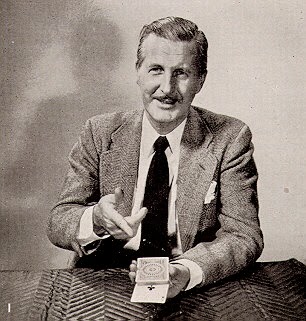 Vernon was around 80 when I met him. He was friendly but also uncompromising in his dedication to the art of magic. He could not stand shoddy work. Once, he watched me perform some card tricks for some guests (informally, sitting around, as most of the magicians do there). When an astonished patron said to me, “How did you do that?” I said, “Very well.”
A good line most close-up magicians use at one time or another. Awhile later I did the same trick for some other people, and once again got the question, “How did you do that?” And once again I said, “Very well.”
Dai Vernon snapped at me, “Quit using the same material all the time!” He wanted the magicians to be constantly improving, never getting lazy, being fresh.
I owned all the Dai Vernon magic books and studied them like crazy. In one of the books he talks about a particular trick that never failed to amaze people, which he called “The Trick That Cannot Be Explained.”
That’s because the way he performed it would change, based upon the circumstances. It started with Dai writing down the name of a card on a piece of paper, folding it and placing down on the table. Then he’d give a pack of cards to a spectator to shuffle.
A few moments later, the spectator would select a card. How he would select it would vary, according to Dai’s directions. But always it would match the one Dai had written down.
How could that possibly be, time after time? And how was it that this trick would never be performed exactly the same way twice? Well, Dai did it by utilizing all the skills he had mastered over the years, using them to manipulate the cards and also adjust to some things the spectator did.
I cannot tell you what those skills are, for then I’d have to kill you. Magician’s code, you see.
But it got me thinking that this is also what a skilled writer does as well. Using all the techniques he’s mastered, he pulls off an effect based on the circumstances in his book, which will never be the same. Each novel presents its own challenges.
Now, there are some folks out there in writing land who purport to teach or inspire writers, who often treat technique as a dirty word. It’s limiting, don’t you see? It blocks your creativity, your inner genius, your wonderful little untamed self that wants to play and be brilliant! So bah on technique. Just write!
For some writers this might be fine advice. For most, I think, it’s toxic.
The plain fact is that this thing we call writing is a craft as well as an art. Where the “just go play” people get it wrong is in misunderstanding the process.
Yes, there is time for play and not thinking about “rules” or “fundamentals.” It’s when you’re coming up with ideas, visualizing characters or cool scene ideas, even writing your day’s pages. This is where you let go and go wild. (I have found that it helps me to use a pen and paper for this part. I use a spiral notebook, the kind a college student would use, and let my pen play all over the page, making doodles and mind maps and plot ideas and connections between characters).
But then there comes a time when you have to look at your writing and put the screws to it. And to do that, you have to know how to identify weakness and know the way to fix them. Like a plumber, you have to know your tools and where to affix them (and believe me, the plumber metaphor is apt, because most first drafts are…well, what they are). You wouldn’t expect a high quality plumber to not know how and where to use their tools, so this applies to you as well.
This is where craft study and knowledge come in.
My most valuable writing possession is a big notebook full of my notes on writing that I put together over the first ten years of my career, and have added to periodically since. It’s a compendium of the things I learned, written down like an excited scientist discovering some new antibody or cure for baldness. Whenever I hit a little drought in the writing week I can always start flipping through my notes and am reenergized in about five minutes.
Do the same. Study the craft and make notes on what you learn. Create your own writer’s notebook. You’ll love it as the years roll on and your writing gets stronger and stronger.
And you’ll especially love performing the trick that cannot be explained on your own books, because you’ll be making magic for your readers.
Can you remember having an epiphany about something in your writing? A time when a light bulb went off in your brain and you thought, Ah! Now I get it! Tell us about it.

35 thoughts on “Bring Some Magic to Your Writing”