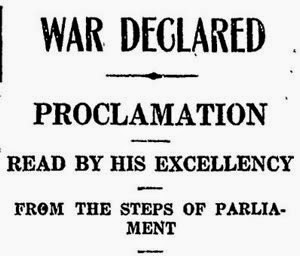 It seems auspicious that today should be my blog day since it’s the commemoration of an event that defines the end of the period I have written so much about. Today marks the 100 year anniversary of the declaration of war by Britain on Germany on August 4th 1914. As Sir Edward Grey is famously quoted as saying ‘the lamps are going out all over Europe, we shall not see them lit again in our lifetime’. To commemorate the anniversary the British Prime Minister, David Cameron, and the British Royal Family have proposed that all of Britain turn out their lights between 10pm and 11pm tonight, in remembrance of that tragic day.

I’ve written quite a bit on this blog about the importance of history and how, as a historical novelist, I try to evoke the past in my books. I think one of the most evocative periods of history for many people is the First World War. It seems to touch us on so many levels – from the loss of a generation of youth, to the visceral horrors of trench warfare that saw hundreds of thousands killed in an effort to claim often less than a mile of no-man’s land. We also have access to some incredible beautiful and poignant first hand accounts  that capture a sense of the end of an era of empires and the beginning of a much altered ‘modern’ world.  For many it is the lasting impact the First World War that elevates its significance in our collective psyche – from creating the conditions which would lead, tragically, to the second world war, to the genesis of many of the boundary and geopolitical issues that remain ruinously contentious to this day.  The First World War saw the collapse of empires, the murder of a royal family, the creation of the Soviet Union, and the birth of a global movement to try and secure peace (sadly, The League of Nations could not prevent a second world war but it was the precursor to the present day United Nations).

I write about the Edwardian era, that supposed ‘golden sunlit afternoon’ before the Great War changed everything. Part of the challenge in writing about this period is to create a distance between what we know is to come and what the people in England actually felt, believed and feared at the time. They certainly feared a German invasion and distrusted Germany’s military build up – (Britain’s paranoia on this created the the era’s own mini arms race). To get a sense of what it was like in Edwardian England I rely mainly on primary sources to try and ensure I don’t create characters who have some kind of omnipresent ability to predict the horrors that were to come. I don’t think anyone at the time had any conception of the type of war that would end up being fought – or the destruction that warfare would bring (not just in physical terms but psychological). For me, Vera Brittain’s memoir, Testament of Youth, is still the most devastating portrayal of both the golden days before the war and also the impact of the war itself. So I thought I’d end this post one of Vera’s poems, entitled August 1914, which seems appropriate given what happened this day 100 years ago.

AUGUST 1914
God said, ‘Men have forgotten Me;
The souls that sleep shall wake again,
And blinded eyes must learn to see.’
So since redemption comes through pain
He smote the earth with chastening rod
And brought Destruction’s lurid reign;
But where His desolation trod
The people in their agony
Despairingly cried, ‘There is no God.’
Vera Brittain

I also leave you with a photograph of the powerful memorial produced by the Tower of London. It’s entitled Blood Swept Lands and Seas of Red and has 888,246 scarlet poppies on display, representing WWI’s British and Commonwealth military dead. 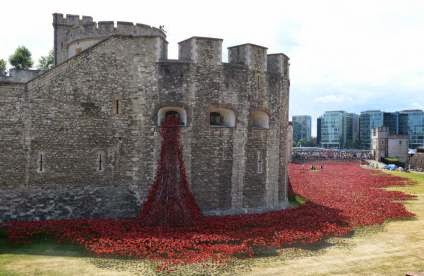 6 thoughts on “The Day the Lamps Went Out”