On Monday, Clare posted a great blog on Finding Your Voice. She pointed out that it’s critical for a writer to have a distinctive voice that fits the genre and helps pull the reader into the story. Along with her post, Clare got a number of excellent comments. Check them out when you get through with my post.

Today I want to add some additional thoughts on developing writer’s voice by comparing it to performing music.

If I asked a musician to play a melody on a trumpet, then asked another to play the same melody on a cello, chances are you could tell the difference between the two even though they played the same notes. Not only does 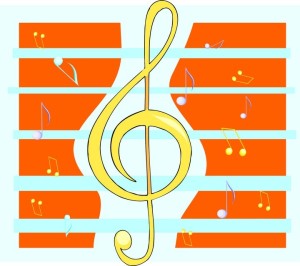 one instrument sound different from the other, but individually, they can convey a variety of emotions based upon the style and technique of the musicians. Both can play the same melody, and when combined with the timbre of the instruments and their respective artists’ style, they can also invoke feelings and emotion.

In a similar manner, when it comes to defining the writer’s voice, it can be the combination of the author’s attitude, personality and character; the writer’s style that conveys the story. It’s called the writer’s voice. Voice is the persona of the story as interpreted by the reader.

So how do you find your writer’s voice and keep it going throughout your manuscript? Here are some tips.

First, start by writing to connect with your readers, not to impress them. Your voice is the direct connection into your reader’s head. Some might argue that the words are the connection. But I believe that the words are like the notes on the sheet music that a musician reads as he or she plays that trumpet or cello. Those notes printed on the musical staff have no value until they are “voiced” by the musician.

Likewise, those written words on the printed page of a book have no value until they are interpreted by the reader. With the musical example, the styles and techniques of the musicians are the connection to the listener. With the novel, the writer’s voice is the connection into the reader’s imagination. The pictures formed in the mind of the reader are strongest when the writer’s voice is solid, unique and original.

The best way to develop your writer’s voice is to simply let the words flow without restrictions—let them speak from your heart. Feel the emotions that your character or (first-person) narrator feels.

Equally important, avoid comparing yourself to other writers. Doing so can be restrictive or downright destructive to your voice. You are who you are, not someone else. Write from your heart while not trying to copy your favorite author. The writer’s voice you need to create is yours alone. There’s nothing wrong with being inspired by other writers, but convert that inspiration into your own style, your own voice.

It’s also dangerous to compare yourself to other writers or become jealous of their style or accomplishments. Doing so always leads to frustration and a product that is not totally yours. If you’ve tried to inject someone else’s voice into your words, the lack of honesty will always come through to the reader.

Finally, as you work on your manuscript, try to visualize a specific reader and write directly to that person. Remember that you’re trying to communicate, to make a single connection with a single reader.

Just like a musician playing the notes on the sheet music, finding your writer’s voice is the process of communicating with your reader the emotions and feelings you feel through your characters. You can’t learn voice, but through writing, more writing and even more writing, you can develop a distinctive, unique writer’s voice.