I’ve never quite believed that one chance is all I get. – Anne Tyler
Back in the early days of sound movies, a handsome but unknown actor caught a huge break. He was cast as the lead in a sprawling Western epic under the helm of a well-known director. The studio began grooming the kid for stardom.
But The Big Trail tanked at the box office. So the studio cut the young actor loose. He was, as they say, “damaged goods.”
The only place he could go after that was “Poverty Row.” These were low-rent studios churning out B and C grade pictures, most of them real stinkers. Here the actor labored for years. In 1937 this actor made yet another B Western, Born to the West. I watched the film recently. It is, without doubt, one of the worst movies I’ve ever seen.
And the actor? A bit stiff and prone to goofy smiles. So add another floperoo to this guy’s resume. No way the actor, Marion Morrison, was ever going to be a star. Perhaps you know him better by his professional name, John Wayne.
But did these bad films ruin his career? Not when the right role and director came along. The role was the Ringo Kid in Stagecoach directed by the great John Ford in 1939. John Wayne knocked it out of the park. 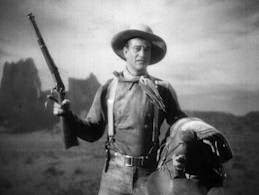 I bring up the Duke as an object lesson for writers. If you go to a writing or publishing conference these days you’re likely to hear an industry insider say something like: “Self-publishing is not always the right move for a writer. Be very wary about doing it. One bad book can ruin your career.”
Indeed, this sentiment was expressed by an agent/panelist at the recent PubSmart conference. The omni-present Porter Anderson was, of course, covering it, and notes:
And in the course of the panel’s comments on self-publishing and how it can play into an author’s career, [agent Brandi] Bowles offered the opinion that if one self-publishes a book and it doesn’t do well in terms of sales, then some publishers might look askance at that disappointment if asked to consider publishing that author.
Bowles is joined by others in the more traditional corridors of the industry! the industry! in suggesting that if there’s a chance that self-publishing could make an author appear to be “damaged goods” to a publisher, then self-publication is, at least, a very serious option, a route not to be taken lightly.
This sparked outrage from at least one self-publishing attendee, who turned a mealtime with Porter into a persistent pronouncement of publishing pique.
So let’s step back and analyze.
In the “old days” (i.e., before 2007), a book’s success or failure had only one metric: physical copies sold (a rare exception would be made if there was massive critical approval in the right places). If a book tanked, those low sales numbers became a scarlet letter sewed onto the author’s jacket. Indeed, many potential long-term careers got nipped in the bud because a large advance was shelled out and dismal sales made recoupment impossible. That’s when an author could get slapped with the label “damaged goods.”
In those same old days, the only option after such failure was to go to publishing’s Poverty Row, smaller companies with fewer dollars and less distribution. Or the writer could give up the dream entirely. Getting another shot a the “big time” was usually out of the question.
I believe this is the context in which the agent made the above statement. But that context has now been significantly altered.
First of all, the term career no longer applies only to getting published by a big, traditional company. Purely self-publishing careers are being established on an ever-increasing basis.
But let’s assume your dream is getting signed by one of the Big 5. If you self-publish a book, and it doesn’t sell a lot, you are still making readers. If the book gets good reviews, you are making a reputation. That’s all to the good.
If, on the other hand, your book gets hammered, you can always take it down. You can come back and try again. And again. Just like John Wayne.
Then, should you come up with a killer concept and you have continued to work on your writing chops, your self-publishing credits will not be a deal-breaker. Traditional publishers know (at least the ones who will survive know) that their distribution and marketing systems are different and can be exploited anew for the author who has learned his trade in the trenches.
Have you ever found yourself holding back because of fear of failure? Then listen to what the Duke might have told you: “You think you’ll have a career without taking some risks? That’ll be the day. Keep writing, Pilgrim, and give it your best shot every time out.”

33 thoughts on “Will One Bad Book Ruin Your Career?”