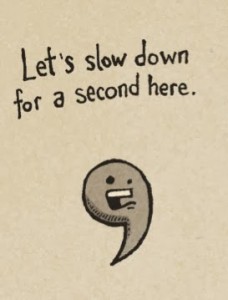 It’s cranky of me to kick off 2014 with a gripe, I know, but what the heck is going on with commas? They seem to be disappearing from the published word. According to the National Geographic’s style manual, “the modern trend is to use fewer commas than we were taught in school.”

Well, I don’t like that trend. The last couple of books I read were penned by authors who appeared to have an almost complete aversion to commas. These writers didn’t merely avoid using the debatable Oxford comma; they seemed to shun commas altogether.

For example, currently I’m reading a book about a major sailing race. The writer seems to be trying to conjure the effect of sailing into hurricane-force winds by her near-total omission of commas.

Here’s a random sentence from the book:

The wind had built continuously with gusts now approaching forty-five knots (about fifty-two miles per hour) and the sky had grown darker.

There’s nothing technically wrong with that sentence, I realize. But my reader’s eye (or should that be “ear”?) was exhausted and needed to take a break before it plunged into “and the sky had grown darker.”

Admittedly, as a writer, I overuse commas. (See?) I inject them into my manuscripts during the first draft stage as a stylistic device. I use them as visual indicators of where I want the reader to pause for breath. One of my final editing chores always involves going back through a draft to remove all traces of my over-exuberant fondness for  commas. (Ditto goes for my overuse of em dashes as well–I am a veritable Queen of Em Dashes. See our discussion in the Comments).

But, dang it all–as a reader, I like to see commas. I even resent writers who want to rush me through their comma-less paragraphs.

Has anyone else noticed the gradual decrease in the use of commas in popular literature? If so, are they destined to go the way of the semicolon in prose, do you think? As a writer, are you trying to use them less frequently these days? Or are you a recovering  over-user of commas, like me?

44 thoughts on “Where Have All the Commas Gone?”