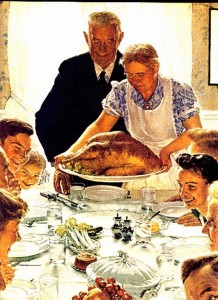 White meat. When I was growing up, that was the best part of the turkey – and the most unattainable.
In German-American families, children were seen but not heard, and the choicest pieces of Thanksgiving turkey were reserved for the adults. Grandpa carved the turkey because he was the head of the family, but he had a subversive streak. Grandpa would “accidentally” drop little slices of white meat on the kitchen table for us grand kids while he carved.
But not too many. That delicacy was reserved for my mom and my aunt. My dad and my uncle got the turkey legs, Grandpa ate the wings and thighs and Grandma ate the pope’s nose – the tail. She’d grown up poor and “got used to eating it,” she said.
But Grandma was determined that her grandchildren would know the finer things, including white meat on Thanksgiving. One year in the 1960s, when I was ten and still eating at the children’s table, she bought a Butterball turkey. 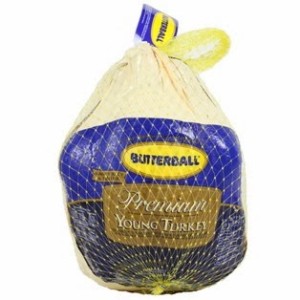 The big-breasted bird was the talk of the family.
When we visited her the Sunday before Thanksgiving, we went downstairs to the basement freezer to admire the prize. The burly top-heavy bird nested amid bags of the frozen peas.
“Look at the size of that breast,” Grandma said. She never used that b-word  except to describe fowl anatomy.
Butterballs boasted more white meat than any other turkey, according to the ads, and we didn’t know about animal rights back then.
At three o’clock that glorious Thanksgiving, Grandma triumphantly pulled her roasted Butterball turkey out of the oven: a busty golden brown bird. 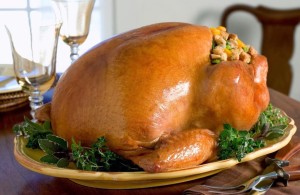 While the turkey cooled, she put the finishing touches on the rest of the holiday feast: giblet gravy, stuffing, cranberry relish, lima beans in cheese sauce, and Parker House rolls. A stick of real butter was enshrined in a cut-glass dish. Mom brought the screw-top bottle of Mogen David wine out of the fridge and poured everyone a thimbleful.
The table sparkled with the best crystal and dishes, seen only on holidays. Even the kids’ card table got a real tablecloth.
Grandpa started carving. First the legs were set aside on the platter. Next he sliced into the golden breast meat. “Oops, I dropped a piece,” he said, and placed a thick slice on the Formica-topped kitchen table. As the oldest, I grabbed it. (Hey, rank has its privileges, even among kids.) Yum. This was the tenderest white meat I’d ever eaten, a sweet promise of the adult privileges waiting for me.
“Me, Grandpa!”“Me!” my brothers and cousins cried as Grandpa gleefully dropped slice after succulent slice of white meat and we kids scrambled for them like hungry pigeons.
He was still giggling and giving us white meat when Grandma said, “Papa, how’s the turkey coming?”
Uh-oh.
Suddenly we noticed the turkey breast was as bony as a fashion model’s carcass. All the white meat was gone, except for a few scraps.
Guilty, greasy-fingered grand kids slipped away.
Now I can eat all the white meat I want, but it never tastes quite as good.
So what lesson does this teach about writing?
(A) Be on the look out when something special lands front of you – and use it.
(B) Nothing. Have a happy Thanksgiving with delicious memories.