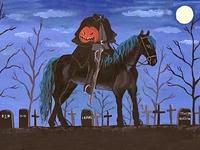 I could be wrong but I somehow doubt that when Washington Irving took quill to parchment in 1820 he ever contemplated that his story “The Legend of Sleepy Hollow” would, almost two hundred years later, find life on the stages of high schools across the United States, particularly in late October. I thought about this last night as I watched Annalisa, my younger daughter, take the stage just these past Thursday and Friday nights at Westerville North High School in the female lead role of Katrina. The faculty director, an extremely talented woman named Kimberly Mollohan who has in her time graced several stages on Broadway (yes, the one in New York), wisely did not attempt to modernize the story in any way. As a result the primary characters, which have become archetypes in American literature and drama, shine through.
Ichabod Crane is the odd schoolteacher come to town, he of the strict discipline and the voracious appetite which belies his slender build. Crane, however, is outclassed by The Headless Horseman. Though he does not enter the proceedings until almost the very end,  The Horseman is owed a debt by every boogieman that you can think of, from Stephen King’s clown under the bridge in IT to the walkers on Walking Dead  to every villain Batman ever faced. Even last night, among the crowd of high school students and the parents of the actors, an involuntary scream (or two) was elicited from among those assembled.
How is it that “The Headless Horseman” has come to endure, after lo these many years?  I would say that it is because its themes are simple and universal. There is a love triangle involving Katrina (and even though it’s just a play, gentlemen, let’s not get too close to the lady, y’hear?); “Brom Bones” Van Brunt, the affable but underachieving town layabout; and Crane, whose feelings toward Katrina are influenced more by his desire to get his hands on her considerable inheritance than by her beauty.  Thus love, lust, and greed create a conflict; throw in a hint of the supernatural and you’ve got a story that survives the centuries.
As I fell asleep last night, the play still fresh in my mind, I wondered: have the great stories all been told? Can you think of a story, a novel, a play published in the last, say, fifty years that has a chance of still being read (or whatever passes for reading) and well known in 2153? What say you? And Happy Halloween!
0

16 thoughts on “The Enduring Legend”